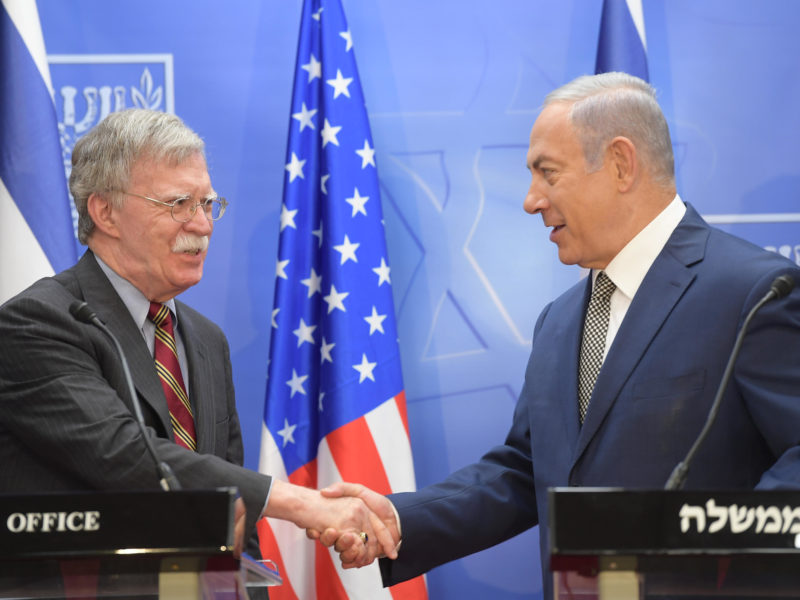 The United States is working with European countries “to convince them of the need to take stronger steps against Iranian nuclear weapons and ballistic missiles program,” US National Security Adviser John Bolton said Monday ahead of meeting Prime Minister Binyamin Netanyahu in Jerusalem.

Bolton added that “Iran never gets a deliverable nuclear weapons capability” was a “question of the highest importance” for the US.

“It’s why President Trump withdrew from the wretched Iran nuclear deal. It’s why he is re-imposing economic sanctions,” Bolton said during a press conference before discussion at the Prime minister’s Office that were also attended by National Security Council Director Meir Ben-Shabbat, US Ambassador to Israel David Friedman and Israeli Ambassador to the US Ron Dermer.

Bolton added that the US remained concerned about Iran’s role “as the central banker for international terrorism” and it’s “belligerent military activity in Iraq, in Syria, with Hezbollah in Lebanon, and in Yemen.”

He also warned that Iranian regional threats also posed “local threats because of the risk of international terrorism, especially terrorists’ possible use of weapons of mass destruction.”

That pressure, Netanyahu continued was not aimed against the people of Iran, but the country’s leaders. “Our fight is with the regime that brutally represses them. That arrests women for uncovering their hair, hangs gays in the public squares, that defies the aspirations for freedom of millions and millions of Iranians,” Netanyahu said.

For just $100 per month you can bring the gospel to 10,000 homes. Join us as media missionaries! GIVE NOW
VIEW COMMENTS
« Gaza Belt Kids Get A Reprieve From Rocket Fire At Jerusalem Day Out Peace Activist Uri Avnery Dies At 94 »