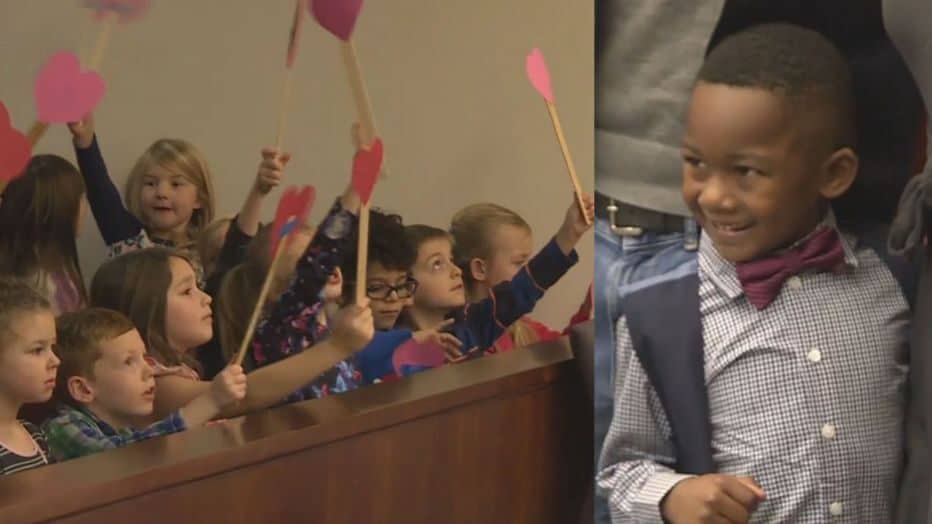 On December 5, a little boy from Michigan captured the hearts of millions after bringing his entire class to his adoption hearing.

The adorable 5-year-old is Michael Clark Jr.  He was part of Kent County’s 23rd annual Adoption Day. He was there to finalize his adoption by parents Andrea Melvin and David Eaton. But he did something extraordinary on this very memorable day in Grand Rapids.

The Adorable Act Of The Little Boy

Michael invited his classmates to join him at his final adoption procedure. According to ABC affiliate WHAS, each family was given 30 minutes to celebrate the end of the adoption process. With the support of his classmates’ parents, Michael had quite the party with him. They brought along with them handmade red and purple paper hearts attached to sticks. Also, each child was given a chance to give a special message to him. They spoke encouraging, joyful words for their dear friend.

Little Boy Found Kneeling In Walmart Brings Everyone To Tears

At the end of the hearing, Michael, together with his new parents, held the judge’s gavel and struck it. After then, they officially became a family. Cheers from his classmates and teachers can be heard in the courtroom scene.

Officials of Kent County wrote in a Facebook post, “There is not a dry eye on Judge Patricia Gardner’s courtroom.”

Touched The Hearts Of People Everywhere

The story of the young adoptee immediately went viral with over two million views on Twitter. And Kent County’s Michigan Facebook post has already reached over a hundred thousand shares.

One of the sponsors of the 23rd Adoption Day also congratulated Michael through their social media:

“It’s adoption day at the courthouse — the BEST day of the year!” wrote the nonprofit.

“Congratulations to Michael and his family . . . so cool that his entire class came to support him!”

Michael’s story is inspiring millions of people.  The love, support, and sense of family inside the courtroom on that day is an example to us all.

Michael wanted to make his adoption day even more special, so he invited a lot of friends. #13OYS #BeOn13 #AdoptionDay #WestMichigan #LocalNews pic.twitter.com/7dFgxZzGtp