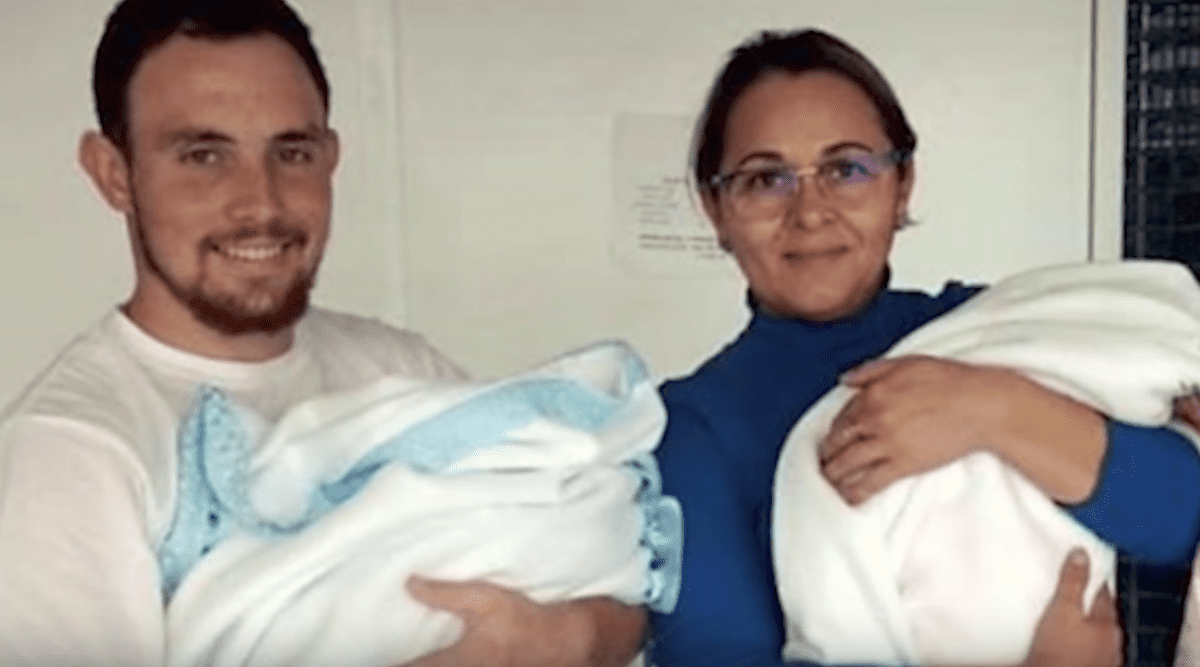 In one occurrence after another, I am absolutely overwhelmed and overjoyed to see the miracle-working power of God. However, hearing about this story left a warming mark on my heart that has left me thanking God for His beautiful creation and His wondrous miracles.

In a very rare miracle, a pregnant woman who was rendered brain-dead was kept on life support for 123 days to save the life of her unborn twins.

123 days later, two healthy babies were born via caesarean section, thanks be to God and the medical staff.

Last October, the woman’s husband, Muriel Padilha, 24, was on his way to work when he received a life changing phone call. His wife, on the other life, was pleading with her husband to come over as soon as possible, stating that her head was giving her immense pain. Unsure of the severity, her husband recommended for her to take a pain reliever tablet. However, Frankielen, his wife, urged him, exclaiming that she had a sharp and uncontrollable pain at the back of her neck and stating that she felt she was going to pass out.

When the husband returned home, he found his wife in the dire state of trembling, crying, and throwing up. Right away, understanding the severity, he drove her to the hospital. During the drive to the hospital, Frankielen tried to prepare Muriel: “I want you to be prepared to accept this because I will be staying there; I won’t be coming home,” she stated, according to Muriel. Those were the last words Muriel heard from his cherished wife before she passed away.

Once they arrived to Nosso Senhora do Rocio Hospital, Frankielen was diagnosed with cerebral hemorrhage and had severe internal bleeding. After three days of testing and scanning, she was declared brain-dead. To be brain-dead, according to WebMD, is the same thing as being declared legally dead. “Many people think death happens when the heart stops beating and the lungs stop breathing, but machines can support those functions when the brain no longer can, stated critical care specialist Isaac Tawil, MD, an assistant professor at the University of New Mexico School of Medicine.

Thus, with the mother officially dead, it was only logical that her only nine-week old twin babies would also pass away shortly after. The doctors would give the babies three more days of life due to the intense tests, scans, drugs, and antibiotics that were used to attempt to save the woman’s life. The doctors stated that they would turn off the life support machines as soon as the babies’ hearts stopped beating. However, due to a true miracle, the doctors found that not only were the babies clinging on to life, but they were growing normally each day.

“There have been other cases, but ours is the longest one with 123 days, four months, and we started with embryos at two months and delivered twins. One of our main functions was to keep the organ functions continual for the babies to grow and develop,” said Dr. Dalton Rivabem, head of the neurological intensive care unit (ICU) at the hospital. “The success of this case was down to great teamwork, and, of course, to a divine purpose,” he specified.

Four months later, two beautiful and hopeful babies were born, Anna Vitoria and Asaph, one weighing 3 pounds and the other weighing 2.9 pounds. The newly born twins were kept in an incubator for three months until they were strong enough to be released.

Now, these two happy babies, along with the couple’s two-year-old daughter, live with Frankielen’s mother, who is graciously giving her all to raise her grandchildren while Muriel works to provide for his children.

With God, All Is Possible

In retrospect of this beautiful and extraordinary story, it is difficult not to see God’s working hand in saving these two miracle babies. As He characteristically does, He took a seemingly hopeless situation and turned it around.

“Frankielen has appeared to me on many occasions especially when I was despairing and crying out for God to bring her back to me,” Muriel stated. “I believe God chose her for this purpose so a miracle could happen.”

In the face of society telling us to deny our Miracle-Working God, let us stay even more focused on God’s miracle-working power, giving glory to God and rejoicing in the multitude of His healings and miracles.

“But Jesus looked at them and said, ‘With men it is impossible, but not with God; for with God all things are possible” (Mark 10:27).