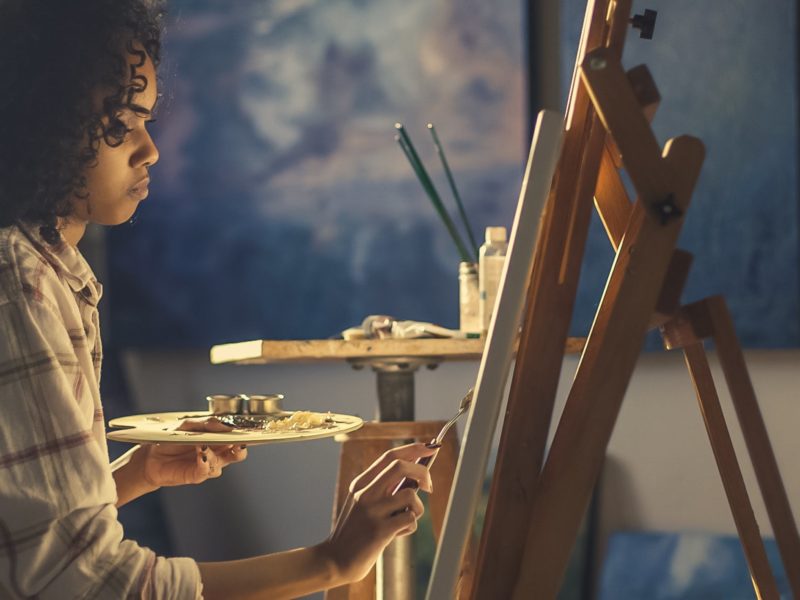 In my first article about art and creativity I shared a dream I had where the Spirit of God was moving inside blank art paper. He was waiting for the stroke of an artist’s brush to release Him into the atmosphere. In this article, I’d like to share a few more testimonies about how God delights in bringing Heaven to Earth through art!

While painting during a corporate worship time, I sensed I was to paint grapes hanging on vines.

After the service a young man approached me and asked me why I’d painted six bunches of grapes. I explained that I was following the Holy Spirit’s direction.

With excitement he told me that during worship he had been asking God for wisdom about several areas of his life. His eyes had been closed in prayer and he saw God’s answer as a picture of six bunches of grapes hanging on vines. God told him if he stayed in step with the Holy Spirit, these six areas in his life would bear much fruit.

He then opened his eyes and saw my painting of six grape clusters.

When we walk closely with Jesus, our lives will be fruitful. He is the reason! His sap (the Holy Spirit) nurtures us and feeds us with the best kind of food. And we produce the sweetest, most delightful fruit!

The young man was deeply touched that God had lovingly confirmed His personal word through a prophetic painting of the image he’d seen in prayer!

Art Releases Joy To A Congregation

I had volunteered to paint as an act of worship during an evening service while on a missions trip. A woman stood next to me who had never before painted prophetic art. She was a bit nervous. We prayed together and asked Jesus to give her His inspiration.

During our prayer, a smile began to spread across her face and soon she was happily brushing paint on the canvas. As I watched her painting take shape I realized she was painting a smiley face!

Incredibly, that evening before stepping up to my easel, I had asked Jesus what I should paint—and I’d seen a smiley face in my mind’s eye! But I’d protested at painting such a cliché image. So I asked Him to give me something else to paint. In my mind’s eye the smiley face immediately morphed into a joyful image of Jesus’ laughing face. Again I protested because I didn’t feel capable of painting a more complex image like His face.

In His infinite patience Jesus showed me a different image to paint. And later, as the woman beside me cheerfully painted her yellow smiley face, I began working on my own canvas.

At the close of the service a fellow missions team member asked if he could borrow the smiley face painting. The painter nodded agreeably.

When people came to the altar for prayer, rather than praying for them, he simply held the smiley face painting in front of their eyes.

The first person he ministered to began to smile, then chuckle, then laugh with irrepressible joy! Without saying a word my fellow team member continued to hold the smiley face painting in front of many people. And before long, the sound of bubbling laughter filled the entire atmosphere. Most of the believers in the room were experiencing overwhelming joy in God’s presence!

I am so glad the other painter was able to humbly respond to Jesus’ suggestion of painting the smiley face, or we might have missed the release of joy God wanted to share that evening!

Bringing Heaven To Earth Through Art

When an artist is sensitive to God’s leading, the Holy Spirit delights to come through their expression. Anointed art goes right to the heart of the viewers and releases the Living Word of God through creative mediums of all types.

God the Creator partners with His creative children to shift atmospheres and change lives.

Creative believer, let His Spirit move through YOU in bringing Heaven to Earth through art!

For just $100 per month you can bring the gospel to 10,000 homes. Join us as media missionaries! GIVE NOW
VIEW COMMENTS
« Applying the Rule of St Columban to Modern Day Christianity Beth Moore’s Advice To Her Younger Self »