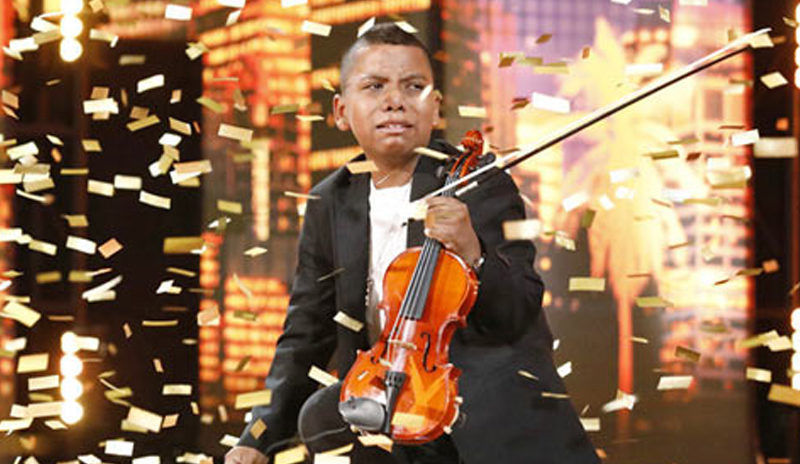 11-year-old cancer survivor, Tyler Butler-Figueroa proved his bullies wrong during the June 11 episode of NBC’s ‘America’s Got Talent,’ when top judge, Simon Cowell pressed his golden buzzer. This means he goest through to perform at the LIVE shows in Hollywood.

Tyler, who is a violinist wowed the crowd with his dazzling performance to the music of Stronger by Kelly Clarkson. The lyrics of the song include the words, “What doesn’t kill you makes you stronger, stand a little taller…”

Tyler Butler-Figueroa was diagnosed with leukemia at the age of four. He battled for his life at this young age and later had to face further struggles at school when he was bullied by his classmates for being different to them.

Leukemia is a type of cancer that affects the blood and bone marrow. Fortunately, acute lymphoblastic leukemia has a 90% rate of survival among children. About 98% of children suffering from leukemia will go into remission after treatment.

It was during a family dinner that Tyler’s mom noticed that something wasn’t right with him. She took him to the emergency room at the hospital and the diagnosis that followed was the most horrifying moment for any mother to receive such news.

“One day we were out to dinner and I said, ‘Something doesn’t look right with Tyler.’ He turned kinda pale so a mother’s instinct said, ‘Let me take him to the emergency room,’” Tyler’s mother said.

After a series of tests, the horrific news was out.

“The doctors came in and they said, ‘Yeah, he does have cancer,’” she added.

Tyler went into chemotherapy that resulted in him losing his hair. It was then that he experienced being bullied.

“When I lost my hair, I was really sad and embarrassed at the same time to go to school. They used to make fun of me and laugh at me because I was different,” Tyler said in an interview on America’s Got Talent.

The kid who plays the violin

But after a few years, the cancer survivor found happiness again through learning to play the violin. He started to attend free violin classes after school.

“When I play the violin, it helps me forget about all the bad stuff. I just didn’t want to be the kid with cancer. So now I am the kid who plays the violin,” Tyler said.

Today, Tyler’s name is going to be known all over the world for his amazing talent! He is such an example to everyone not to give up and silence your critics by using your God-given talents to the full.

For just $100 per month you can bring the gospel to 10,000 homes. Join us as media missionaries! GIVE NOW
VIEW COMMENTS
« FIFA Launches Investigation Against Head of Palestinian Football Association Rajoub New Parents On The Block: Christian Singer Jamie Grace And Husband Aaron Welcome Their First Child »