“Can You Imagine Growing Up Like This,” Ask Gaza Belt Teens As Black South Protest March Comes To Knesset 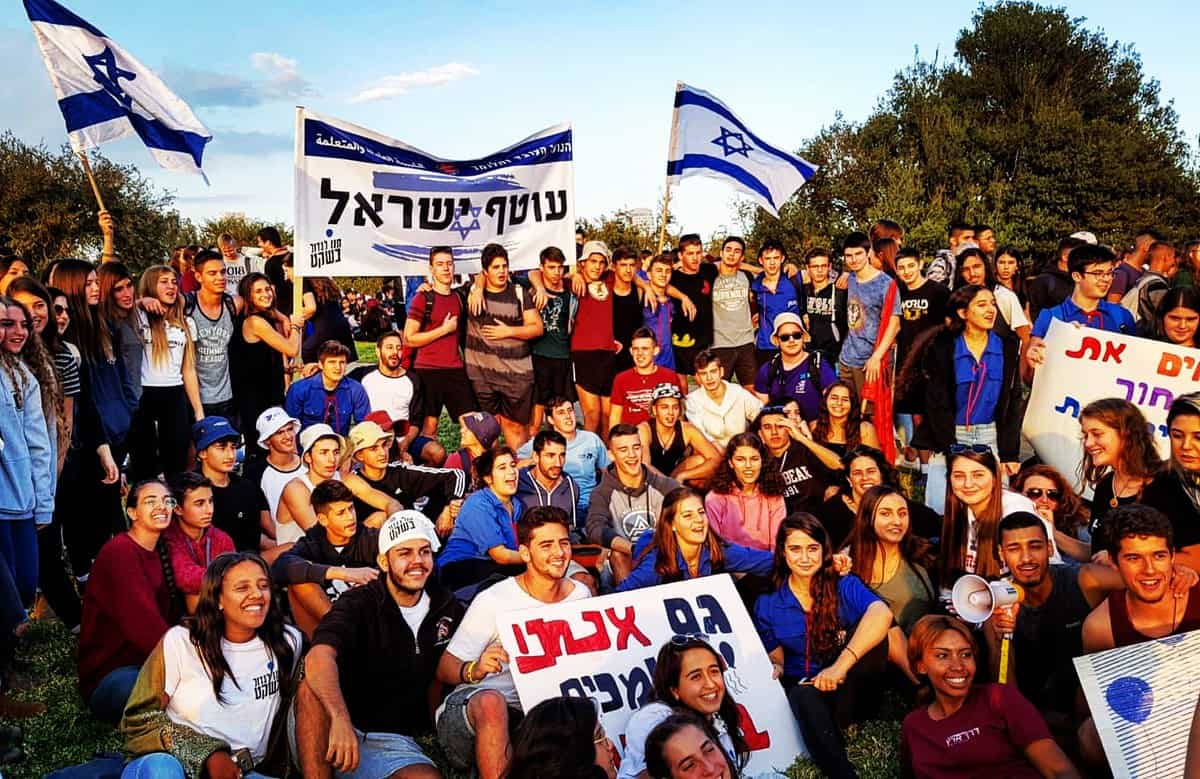 Thousands of high school students from across Israel joined together with teenagers from the Gaza Belt region as the “Black South” protest against the situation on Israel’s southern border concluded outside the Knesset in Jerusalem on Thursday.

The teenagers walked 90 kilometers over five days from their homes in southern Israel in a bid to draw attention to their struggle of living and growing up under continued rocket fire, kite terrorism and incendiary balloon launches from Gaza.

A rally was held in the Jerusalem Park opposite the Knesset, and as the master of ceremonies shouted, “Who here is from the Gaza Border Community?” the entire park erupted with a loud and united cheer.

“We are so glad that you made it here, thank you for being here,” he said.

Three boys from Kibbutz Saad, which sits just a few kilometers from the Gaza border, explained to Tazpit Press Service (TPS) that what is happening in the south is not okay.

“The rockets and kites, balloons that come in, go on and on, all day, every day during Shabbat, during Jewish holidays, this past summer too,” lamented Yehuda, Yishai and Eliya. “It doesn’t stop and it’s really hard to live like this sometimes.

Yishai, who is 15 years old, said that it’s time people take notice of what is happening in the South. “It’s really important that people know what we are going through, can you imagine growing up like this?”

Yehuda added that “we ended the march outside the Knesset because this is a place where things are taken seriously – it won’t be seen as a joke.”

Asked about life in on the Gaza border region, Eliya and Yehuda said that “there are long term consequences from living like this.

“Children are afraid, it affects us psychologically and now with the balloons, which are supposed to represent happiness and fun, we have to be even more afraid, it’s crazy. It’s enough,” they said.

When questioned about what action the government should take, all three said in unison that it was “time for an operation.”

“Either they must launch a ground incursion into Gaza, or tell them that they are turning off the electricity in Gaza until it all stops – the balloons are not funny, it’s not a joke,” said Yishai. “Some nights we have to run and stay in the shelters all night. This is not a life, but there is nothing we can do,”

Fourteen-year-old Eliya said he was deeply concerned by the damage the incendiary balloons are doing.  “Everything is getting burned [by the balloons], it’s costing so much money and the environment, nature, the animals, and the birds are all dying and burning. It cannot continue.”

Many of the high-schoolers waved Israeli flags and large, colorful signs with slogans such as: “We want peace and quiet, not only in our dreams”, “Bring peace to your people, end the rocket fire,” and “Only when there is quiet, will there be peace!”

One colorful poster with an illustration of a balloon and a fire burning bellow said: “This is no longer a toy for children.”

Two young girls from Kibbutz Kfar Azza said that for them “war is not the answer. We don’t want a war, but at the same time this can’t continue. There has to be another option.

“Two weeks ago,” said Shachar, “I was outside with my friends and there were was rocket attacks, it came from nowhere. I was very scared. I screamed and I cried. I look at my dog and I look at my family and all I see is trauma.

“When will it stop?” she questioned, visibly damaged and distressed from the situation.

Dalia recalled that just last week incendiary balloons landed on her school. “It’s not okay, we had to call the police and evacuate because they didn’t know if there was an explosive on it or something that can cause a fire.

The Power Of Hagar’s Vision