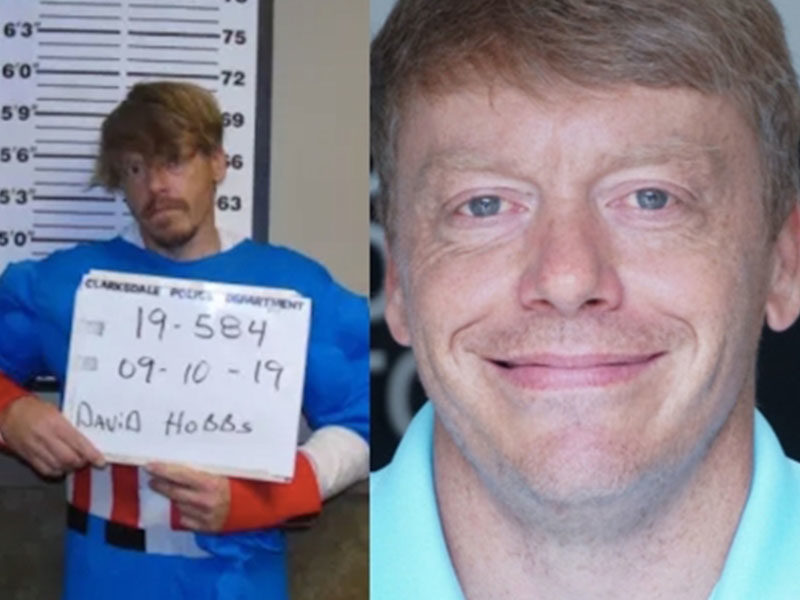 A former drug addict who went viral after being arrested for breaking into someone’s backyard while dressed in a Captain America costume has found Jesus in the midst of having the entire world laugh at him.

A year ago, in September 2019, authorities arrested David Hobbs in Clarksdale, Mississippi. Apparently, he broke into the backyard shed of a former Marine while dressed head to toe in a Captain America costume and fairy wings. The former drug addict’s mugshot then went viral. Quickly, he became a trending topic, and millions of social media spectators mocked him. But while the whole world poked fun at him, God, in His compassion, was on His way to save David.

David’s story reached the Good Landing founder and CEO Trey Lewis. Unlike what most have perceived, Trey saw him as a “man worthy of receiving compassion, empathy, and freedom from addiction.”

“A friend of mine sent me David’s story, and I recognized him immediately,” he told CP. “We were from the same small town in Mississippi and used to get high together 20-some years ago.”

As a former methamphetamine addict with four DUIs on his record himself, he reached out to David without hesitation. He wants to help people like David who are struggling to be free from addiction.

“So when I came across David’s story, I called his mother immediately and said, ‘We want to help him. If he’s interested, there’s a place for him in our facility,’” Trey recalled. “As the entire world is laughing at David, he is in a jail cell and there’s a mom that is talking to him every night, that is just horrified, embarrassed, and just can’t believe that it’s all over social media. It’s not funny when it’s attached to real people. It was heartbreaking.”

“I said, ‘Absolutely, I would love to go,’” he said. “I didn’t know what to expect. I’d never been to rehab before in my life; I’d never been sober in my life. But I wanted to get clean in my addiction, so when Trey reached out to my family and gave me the resources to get clean, I accepted. Thankfully, a judge agreed to allow me to participate in rehab instead of serving jail time.”

At Good Landing, David learned how to process his emotions and feelings, eventually overcoming his battle with addiction. And most importantly, there he renewed his relationship with God.

One year later, David has shown remarkable progress. Thus, he will receive his one-year sobriety award from Good Landing Recovery on Oct. 23 during an upcoming pastor’s conference.

“This award shows me how much I’ve grown,” he said. “Before anytime something bad would happen or someone would say something negative about me, I always had the mindset that I would prove them right. I just figured, ‘Well, this is who I am. I’m an addict.’”

But he added, “But those are all lies. That’s just what fear tells us. That’s what the enemy tells us. But we all deserve a good, sober life and a good relationship with God. These are the things that I’ve been taught since I’ve been here at Good Landing.”

Before David’s September 2019 arrest, he had already had several run-ins with the law. Moreover, he was on probation for a grand larceny conviction.

“I hit absolute rock bottom,” he admitted. “I believed I wasn’t good enough to get sober, I thought, ‘this is just the hand I’ve been dealt.’”

“I never thought I would ever get out of addiction,” he said after being an active addict for two decades. “I thought it was going to be my life. But God has shown me I’m not just a society throw away. It’s all worth it for all of us to strive to have a better life. If I can do it, anybody can do it.”

Moreover, David became a staff member at Good Landing where he helps others struggling with addiction as well. “He’s absolutely killing it here,” the Good Landing CEO said.

David declared, “It doesn’t matter how far you have fallen, there’s always a path of sobriety and redemption. You just have to be willing to get clean and have an open heart and mind to the people that are speaking into your life. Getting sober and changing your life is possible. You’re never too far gone.”

Jesus Is The Only Way Out Of Addiction

The Christian organization’s CEO Trey “believes Good Landing’s commitment to keeping Christ at the center of the ministry is the key to the facility’s success.” He remembers being discouraged by a lot of people when he started the program. However, he said, “But Jesus is at the forefront of everything that we are. I believe God breathed on it and took us to where we are today.”

“Jesus,” he stressed, “is the only way out of addiction. He’s the only one who can bring freedom in this life and in the life to come.”

For just $100 per month you can bring the gospel to 10,000 homes. Join us as media missionaries! GIVE NOW
VIEW COMMENTS
« Mom Overwhelmed When A Cure For Son’s Sickness Came Right To Their Doorstep Battle Of The “Yids”? Tottenham Hotspur And Maccabi Haifa In Emotional Encounter »