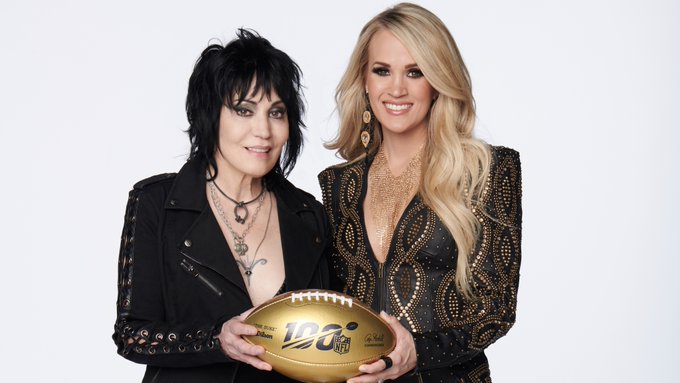 “Waiting All Day For Sunday Night”

America knows it. America loves it.

It sets the tone for football season and gets us all ready for America’s favorite sport, every-single-year.

Released in 1988, Joan Jet’s “I Hate Myself For Loving You” was the original basis for the NFL opening song “Waiting All Day For Sunday Night”. And while there have been many opening presenters in the past, Joan Jet will now be joining Carrie Underwood for this season’s rendition.

While Carrie will be returning this Fall for her seventh season as the opener and vocalist for NBC’s Sunday Night Football.

#Repost @snfonnbc ・・・ Hey Jack, it’s a fact, THE SONG’S BACK IN TOWN. @carrieunderwood and @joanjett are bringing ‘Waiting All Day’ back to SNF this season! 🎶

Carrie is an iconic figure in both football, music and the Christian world. The talent and favor on her life is light and sense of consistency for people.

In an interview with NBC Sports, Carrie Underwood expressed; “I have always been a huge fan of Joan’s, and I’m thrilled that she’s joining us for the Sunday Night Football open,” she said. “What better way to pay homage to the original SNF opening song than by getting to play with her on primetime’s biggest stage?”

So keep your eyes open for this brand new rendition of “Waiting All Day For Sunday Night” this Fall!

For just $10 per month you can bring the gospel to 1,000 homes. Join us as media missionaries! GIVE NOW
VIEW COMMENTS
« Brian “Head” Welch Completes His Loud Krazy Love Tour Apostasy In The End Times »