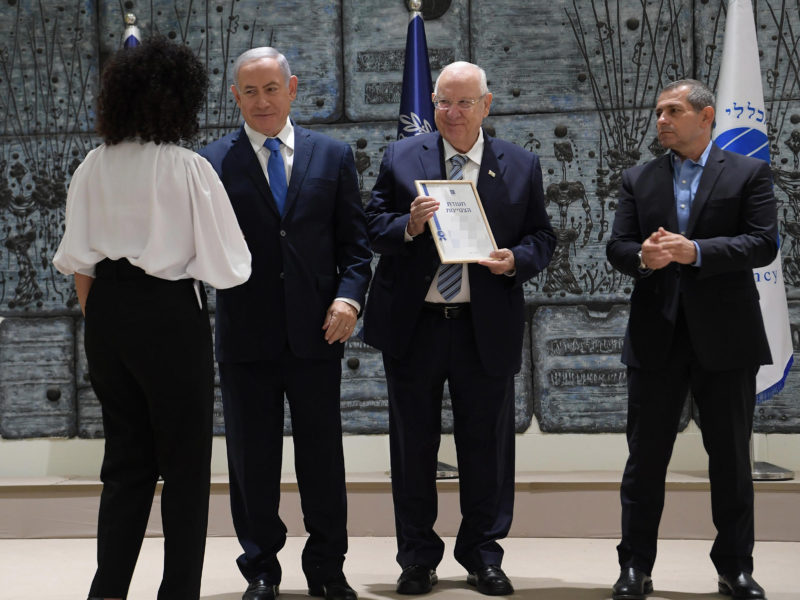 The very best employees of the Israel Security Agency (ISA) on Monday were awarded certificates of excellence by Prime Minister Benjamin Netanyahu and President Reuven Rivlin.

The certificates were given to 15 men and women of the ISA at a ceremony that took place at the President’s Residence in Jerusalem.  They were recognized for their exceptional service, which advances the mission and exemplifies the organizational values of the ISA.

The motto of the ISA is “The Unseen Shield,” as the secret nature of their work means it can rarely be showcased in public. The awards given to the employees at the ceremony show the appreciation of the public for their quintessential work towards public security

President Rivlin expressed his great appreciation for the ISA and pointed out the difficulties that arise from the secret nature of their work. “Public recognition of your hard work, even when it is limited as it must be, is the exception to the rule. In your role, you act in the shadows, away from the public eye, and do your work in absolute secrecy,” the president said.

He added, “It is not only family members who do not know, but the wider public – the media, citizens, and even some elected officials – do not know the nature of your work. That sometimes leads to indifference, and sometimes to criticism.”

The recognition of their hard day-to-day work came after a big success for the ISA operatives, as they caught the terrorists who murdered Dvir Sorek within two days. Prime Minister Netanyahu thanked them for their part in the operation.

“I thank you for your contribution in apprehending the murderers of Dvir Sorek. As soon as we learned the details, I said with great confidence that it would not take much time until we would lay our hands on the murderer. This is what you have done in recent years; all murderers, without exception, have been apprehended.” He said.

Netanyahu also outlined the general work carried out daily by the ISA. “You work night and day for the well-being of our citizens. In the past year, you thwarted over 600 terrorist attacks. This was a counter-terrorist action of immense scope. We are doing everything to cut off terrorism at its outset.” He told the awarded ISA employees.

For just $100 per month you can bring the gospel to 10,000 homes. Join us as media missionaries! GIVE NOW
VIEW COMMENTS
« Next-Generation Israeli Satellite to Seek out Cosmic Explosions and Black Holes Hamas Crushes Dissent in Gaza »