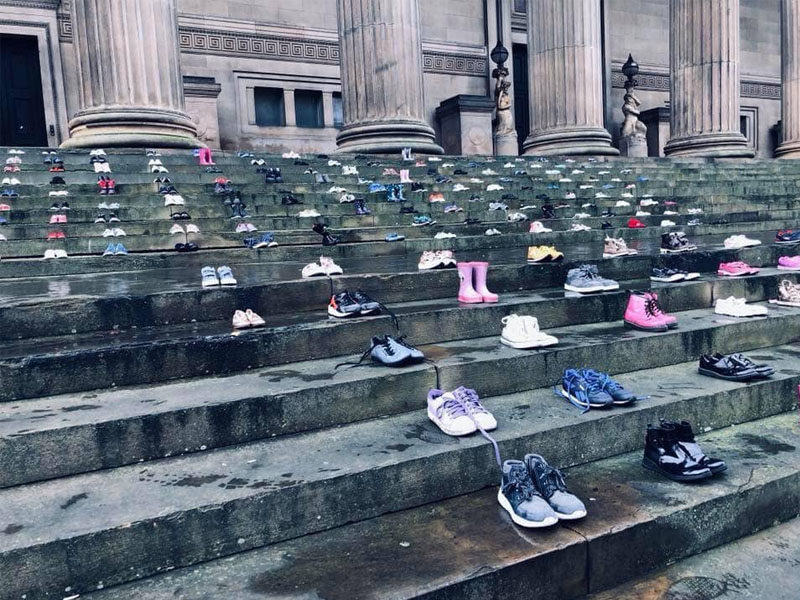 The children’s shoes lined-up at St. George’s Hall is a powerful display that reveals the reality of child suicide rates.  The display is based on the numbers from 2017.

According to reports from the World Health Organization, suicide is among the top three leading causes of death worldwide. In the past 45 years, suicide rates have increased by 60% and the common root of it is mental health disorders.

What is more alarming is that children as young as 10-year-old are now commiting suicide. Suicide rates among young people have increased rapidly so much that they are now the group at highest risk.

During this year’s Children’s Mental Health week, Millie’s Trust reposted a disturbing photo taken in 2017 in an attempt to raise awareness about the mental health of young children. Millie’s Trust is a non-profit organization that aims to save lives by providing education and training to parents, teachers and youth leaders.

The striking photo is a photo of the children’s shoe display at St. George’s Hall that creates a visual for child suicide rates. There were 226 pairs of shoes lined up, representing the number of young children who took their own lives in 2017 in the United Kingdom.

“Today is the start of Children’s Mental Health Week 2020,” Millie’s Trust wrote as the caption for the moving photo. “These shoes represent the 226 schoolchildren who lost their lives to suicide in 2017 in the UK – a pair for each school child.”

In 2016, statistics from the World Health Organization reveal that there were over 62,000 young people ages 10 to 19 that committed suicide. These alarming numbers require action, and Millie’s Trust has stepped in to educate people about Mental Health.

Additionally, this non-profit organization will be hosting a two-day Youth Mental Health First Aid course. They are opening the course up to anyone who works with children.

It is time to fight for this generation and help them find hope and healing!

For just $100 per month you can bring the gospel to 10,000 homes. Join us as media missionaries! GIVE NOW
VIEW COMMENTS
« Grade School Students Sing Worship Song ‘Way Maker’ Inside Their Classroom Pastor Who Predicted The Chiefs Win, Dies While In Miami For Super Bowl »