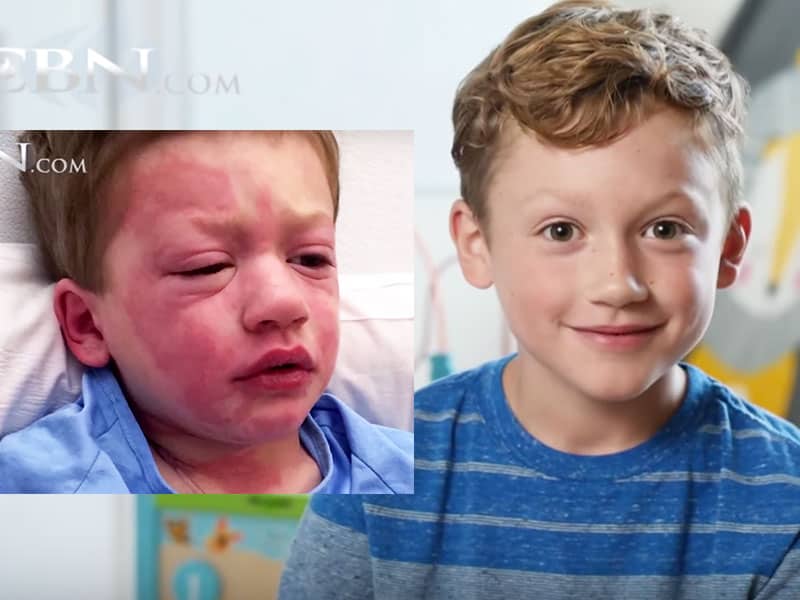 Have you ever experienced a miracle in your life? If not, do you believe they exist? For 4 year-old Noah and his parents, they surely do. The miracle happened when Noah was suddenly attacked by a lethal disease.

As an infant, Noah Stoltz had several ear and viral infections. Because of this, he kept getting sick over and over again. And so they got his immune system tested. Then they found out he had an immune deficiency. The viruses he was catching never built up immunity on his body.

Noah’s parents, Lindsay and Dalton, doubted if Noah’s would ever get better. He continued to struggle with numerous health issues and even doctors failed to find answers.

At age 4, they had Noah tested again but the results showed that his immune system was fine but the doctors told Lindsay that it could be something worse. It could be an autoimmune disease or a cancer.

The thought of losing him forever terrified Lindsay.

But God gave her husband Dalton peace. So they continued to fix their hearts and minds on Jesus.

“I really believe that the LORD’s gonna heal our son. But I believe it’s gonna get much worse before it gets better,” says Noah’s father.

Dalton resorted to prayer and that became the source of their family’s encouragement.

Noah’s Sickness Spiraled Out Of Control

However, on one dreaded day, Noah came home from school in pain. He was having a lot of pain in his heart and down his arm. He started breaking out in what looked like hives and a rash started to appear on his torso. That night, Noah was taken to the hospital and admitted to the emergency room. And quickly Noah spiraled out of control because of the disease. The rashes that had been on his torso spread over his entire body. And his face began swelling and he threw up violently.

Doctors said that they have to get him stable or they could lose him.

“I remember crying out to God saying I feel like the very gates of hell have come against my child,” recalled Lindsay.

But then she added, “I just felt the Holy Spirit saying I know what that feels like because His Son really had come against the gates of hell and overcome.”

Right then, peace overtook Lindsay’s heart and she thought, “There was nothing we were about to walk through that Jesus couldn’t relate with.”

They kept on praying and believing that God was going to heal their son. An army of people also prayed alongside them for Noah.

“I’ve never seen a patient deteriorate so quickly and rebound so quickly.”

Dalton then concluded, “That five days in the hospital was just a constant battle just to remember the truth of who God is and to not doubt Him in the middle of the storm.”

Indeed, there is power in prayer. God healed Noah!

Doctors Were Stunned When Child's Disease Vanished Without Explanation