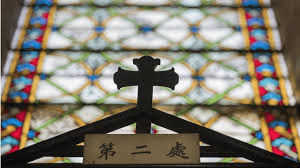 Sundays will be different in Beijing for many Christians. While we have the choice to worship freely in the west, virtually unhindered; religious freedom is being expunged in China. The leadership in the country are forcing churches and places of worship to close at an unprecedented rate. Declaring worship ‘illegal’ in a vain attempt to decapitate the church. LINK

In addition, it has been reported that over 1m innocent Uighur Muslims in the Northwest are being incarcerated and put into ‘re-education’ programs. This is being conducted under the guise of ‘tackling extremism.’ An extremely worrying development. The word you are looking for is sinicization. This is the process where societies and communities are forced to adapt to the Chinese culture, customs and way of life.

However, this new wave of suppression by the Chinese government against Christians, is not only prohibitive but violent. It includes banning of building large religious statues, burning of bibles and crosses, coercing Christians to sign declarations and denounce their faith. Forcing all religious persons to vow loyalty to the Communist party.

We acknowledge that the persecution of the church is nothing new, especially in China. However, the intense escalation of recent events has taken everything to a whole new level very quickly. Christian freedoms were granted by the Chinese constitution in 1982, however, it would appear that President Xi Jinping has declared war on the church and that those said ‘freedoms’ are now meaningless. Burning on the pyre of oppression.

China boasts around 38 million Protestants alone, leading many to predict that it will become the world’s largest Christian population very soon. Pastor Jin Mingri who runs a 1,300 strong congregation, one of China’s largest, commented this week,

“The Communist Party has begun to see religion as a competitor. It’s not just Christianity, but also Buddhism and Islam…” said Pastor Mingri.

In the United States we are proud of our Constitution. Freedom of religion is embedded in our 1st Amendment. It states:

“Congress shall make no law respecting an establishment of religion, or prohibiting the free exercise thereof; or abridging the freedom of speech, or of the press; or the right of the people peaceably to assemble, and to petition the government for a redress of grievances.”

In plain English – you are free to exercise your right to practice religion or not.

So, as we look towards China, we re-position ourselves in prayer. We send our love to all of our brothers and sisters there at this time. We pray for for those denied the right to worship whatever their faith who are enduring suffering.

No matter what the authorities may think, a man’s heart, once in Christ, cannot be moved. We decree and declare Matthew 5:10 as we bow our heads and stand in agreement for freedom from persecution. We thank Jesus for His words and the hope they bring:

“Blessed are those who are persecuted because of righteousness, for theirs is the kingdom of heaven.”

For just $100 per month you can bring the gospel to 10,000 homes. Join us as media missionaries! GIVE NOW
VIEW COMMENTS
« Syrian Army: ‘We intercepted an Israeli attack near Damascus’ Can I Lose My Salvation Because I’ve Messed up too Badly? »