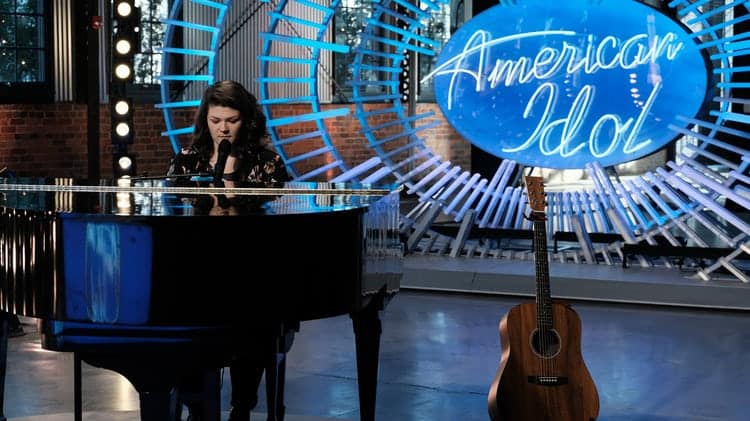 Before finding fame in mainstream pop, Katy Perry was known as Christian singer Katy Hudson. She was a pastor’s daughter who grew up in California. Although Katy is not overtly a practicing Christian, she refers to praying and spirituality often.

When she was 13, she found the courage to take the stage and share an original piece called Amazing Creator. “It was the first time I sang in public,” said O’Hara.”

O’Hara chose Katy Perry’s song Unconditionally to sing at a recent Idol performance. The video has been viewed over a million times on YouTube. During the performance, you can see how Katy is moved by O’Hara’s voice and talent.

After, Katy Perry sits down with a three-on-one interview with O’Hara and encourages her, relating to her church upbringing and naming her a “secret spiritual ninja.” O’Hara’s told she moves up to the Top 24.

Even though O’Hara’s Idol career came to an end before she could get to the Top 14, she continues to record and sing and give glory to God. She encourages her 25k Instagram fans by sharing scripture and staying positive even though she didn’t walk away as finalist. On her Instagram, she says,

“Hey guys! I feel so at peace with the way my journey on Idol ended. God kept me on the show as long as He wanted me there. His plan is perfect. My heart is filled to the brim with gratitude from all the extremely kind things said by friends, family, and fans. To everyone you has supported my Idol journey thus far, THANK YOU from the bottom of my heart. Nothing but positivity y’all.

I can’t wait to start showing you guys what’s in store next with my music☺️ I’ve got some cool things coming your way!”

She ends by quoting Colossians 2:6-7 which says, “So then, just as you received Christ Jesus as Lord, continue to live your lives in him, rooted and built up in him, strengthened in the faith as you were taught, and overflowing with thankfulness.”