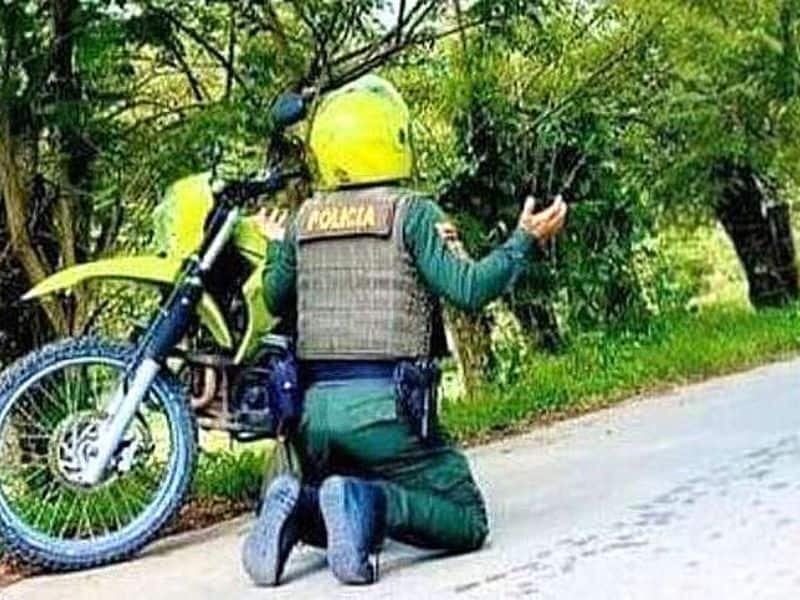 A picture of a Colombian police officer went viral as he was caught on his knees, praying for his afflicted country. The nation is suffering from violent attacks from ominous gangs targeting the police and civilians.

Colombia has seen more than 30 deaths of police officers just this year. According to Catholic News Agency, crime gangs, namely the Clan del Golfo, have caused the killings.

The criminal organization promised rewards of up to 5 million Colombian pesos for the assassinations. As such, more and more police officers have fallen victim to their evildoings.

As a result, Colombians have been seeking God for help and protection. That is why when they saw the picture of the police praying on his knees, stretching his hands out to heaven, it touched their hearts because it perfectly represented their current situation.

The unknown police officer has received thousands of support online. One commenter shared, “The policeman is clear about it. He knows that wars are won on his knees. Blessings for all the police and military in Colombia.” 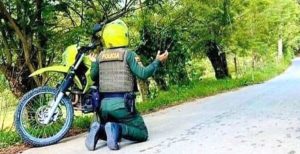 The Colombian Police Officer praying on his knees

Another user prayed, “Beloved God, bathe all police officers and soldiers with your blessed blood and do not allow them to be killed by the same man. Lord Jesus Christ, let them live with dignity. I understand that everyone makes mistakes. But murder is not the way to die. Mercy, Lord.”

Meanwhile, religious organizations have united to pray for the nation. Last July 28, the Colombian Bishop’s Conference have called the citizens “to pray to the Lord of Life for the National Police and for a country at peace and reconciled. ”

They also offered words of encouragement and thanks for all the members of the police force who have been selfless in their service for the country.

Moreover, they urged the police officers to call on the Lord everyday as He is the refuge in times of danger.

Let us join with Colombia to pray against the attacks of the enemy. Jesus is undefeated. Let us declare His victory over the nation, today.