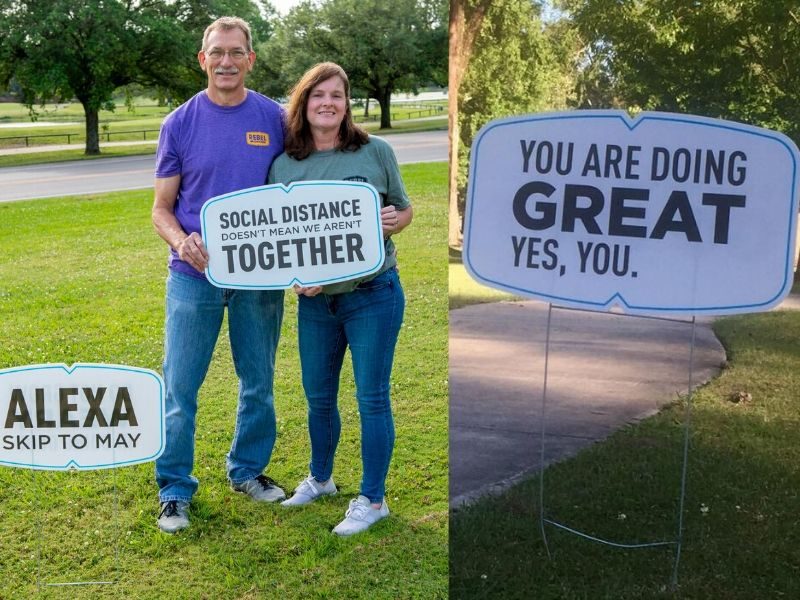 The pandemic has caused fear and trauma around the world for months now. Nevertheless, more and more people have been trying to spread positivity through their own means. One company in Baton Rouge, Louisiana stepped up by placing funny and inspiring phrases around their city to uplift their city’s spirits.

Rebel Graphix is a 63-year-old local company that creates customized and designed graphics. Since the outbreak, they have been seeking to create a positive environment by placing encouraging and humorous signs around the city. Residents find the messages entertaining, helping them cope in this trying time.

“We have such a great team here. And we were just kind of knocking around ideas of things we could do to brighten the spirits of the city. We came up with this idea of just putting some inspirational messages out in town where people were walking,” Lewis Roeling, President of Rebel Graphix, said. “Encouraging them to call their grandparent or just encouraging them in general.”

A couple of the funny messages are, “Alexa, Skip to May”, “Introverts, Check on Your Extroverts”, “Pajamas are the New Black”. While others are encouraging, “Social Distance Doesn’t Mean We Aren’t Together” and “Don’t Grow Weary in Doing Good”.

Today, they have put 75 signs around the city and plan to add more. Locals are comparing their efforts to the game, “Treasure Hunt” as they look forward to discovering more signs.

For just $100 per month you can bring the gospel to 10,000 homes. Join us as media missionaries! GIVE NOW
VIEW COMMENTS
« Woman Possessed With Evil Spirits Set Free After Praying In Jesus’ Name God’s Word For You Today »