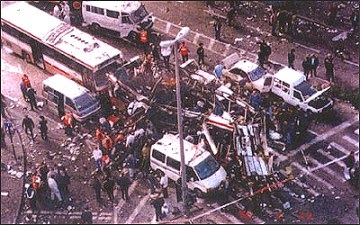 US Congressman Josh Gottheimer (NJ-5) announced a bipartisan “Resolution to Stop Rewarding Terrorists” condemning the murder of Teaneck, NJ, native Sara Duker in the 1996 Jerusalem Jaffa Road bus bombings and calling for the Palestinian Authority (PA) to renounce its policy of payments to terrorists.

Duker, a graduate of Barnard College, Columbia University, and high school graduate of Frisch School in Paramus, NJ, was one of the two Americans killed in the February 25, 1996, terrorist bombing in Jerusalem that killed 26 people.

Since Duker’s death, the terrorist who orchestrated the bus bombing, Hamas terrorist Hassan Salameh, has received nearly $300,000 in payments from the PA, more than $2,000 a month, while in an Israeli jail for his role in this bombing and two others, which killed a total of 46 people.

The PA has a policy of paying the families of convicted terrorists imprisoned in Israel a monthly stipend. The payments have been criticized as a financial incentive to commit terrorist attacks against Israelis.

According to the PA’s pay scale, the salary of an imprisoned terrorist begins at NIS 1,400 ($401) every month from his first day in prison, and gradually rises to NIS 12,000 ($3,435), in accordance with the amount of time he has been in prison.

Therefore, the more severe the attack was, the higher the stipend the terrorist is set to receive.

The US Congress in March 2018 passed the Taylor Force Act, ending American aid to the PA until it definitively proves that it has stopped paying stipends to terrorists and their families.

“Nearly 25 years since the terrorist attack which killed innocent American citizens, including Sara Duker, from my District, the Palestinian Authority continues to reward terrorist perpetrators with generous ‘martyr payments.’ This brutal practice is indefensible, and should be condemned by all who care about justice and human rights,” Gottheimer stated.

For just $100 per month you can bring the gospel to 10,000 homes. Join us as media missionaries! GIVE NOW
VIEW COMMENTS
« EU, France Build Illegal School For PA Arabs In Israeli Area C From Revelation To Visitation To Habitation »