This Couple Was Burning Alive...Then an Angel Appeared and Saved Them | GOD TV
Faith 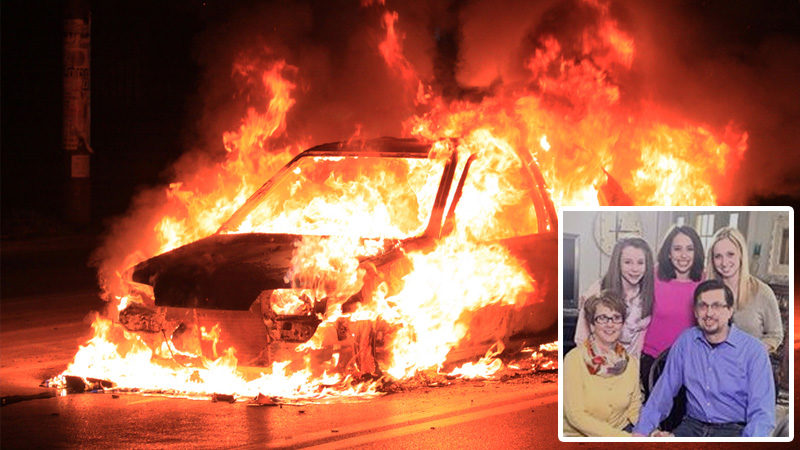 It is the stuff of nightmares: Tracey and Dann Stadler were out celebrating a joyous occasion – their 4th wedding anniversary. Driving home responsibly, they were struck head on by a drunk driver who was driving in wrong lane down the highway. After the collision, a fiery nightmare became real life. Chances of survival – slim to none.

But responding to fervent intercessory prayers, God sent down his angel to rescue this desperate couple. Read on to discover the awe-inspiring power of prayer.

The driver of the other car died immediately, leaving Dann and Tracey to struggle for their lives. Frighteningly, they were both awake and conscious, but they were trapped under a pile of heavy debris, unable to escape the growing blaze of the fire.

According to Dann, “There was so much wreckage pushed in on us that we just couldn’t move. Tracey was literally trapped by the engine and everything else had collapsed in on her.”

Tracey took over the story from here: “I looked at my husband and he reached over to try to unbuckle my seatbelt. And then whoosh, he started on fire. I tried getting to him, but I couldn’t move. I was trapped.”

The Prayers of Strangers

Complete strangers were quick to hop out of their cars and attempt to rescue the couple from the all-consuming flames. Dan recounts, “They began praying as soon as they came upon the wreckage … They were doing everything they could spiritually to rescue us. However God’s will was going to play out, they were involved in it.”

That’s right – sensing the impossibility of a human rescue, the onlookers passionately prayed for a divine rescue. Rescue efforts continued, but the situation continued to worsen. “I remember leaning up and looking at all these people lined up and they were hysterical. And I remember even locking eyes with a woman,” Tracey reported.

As time wound down to get them out of the car alive, Tracey herself began to pray. “I said prayers I never even knew were in my mind. I said, ‘Father I pray that You forgive me for my sins. You said You have many mansions in Heaven, and I pray there’s one for me … Please don’t let me burn to death.’ And then I looked up and there He was.”

Well, it wasn’t God, but one of His angels sent to rescue them. Tracey continued her jaw-dropping story: “It was a Heaven-sent person in angelic form. And at that point He just lifted me up and I went with Him. He pulled me out and we started getting further away from the accident site. At that point, I knew I left my body.”

She went on to say, “The further we got away from the accident the more peace I felt – such peace. And the love? The love can’t be explained; we’re too finite in our words. It can’t be explained in human terms. The love – like you are going home. There was no pain, no regret, only anticipation.”

Emphatically, Tracey concluded, “The only thing that mattered was my relationship with Christ. And I felt like I was in the arms of God, of Jesus Christ himself.”

Amazingly, Dann corroborates Tracey’s entire story, saying that he witnessed the same Heavenly being. “He appeared to have a glow about Him,” Dan remembered.

Simultaneously with the divine rescue, one of the men who had been praying buckled down to his knees because he felt the healing power so intensely. A rescuer freed Tracey, claiming she was “as light as a feather.” Dann recounted, “She just essentially popped out right into his hands.”

A seemingly hopeless situation suddenly turned into a miracle due to the power of prayer. And then profound healing occurred. The angel remained with the couple, put His hands over them, and healed them. The couple abruptly and unexpectedly awoke, safe and sound away from the fire. They would live to see another day – a blessing they received straight from the hands of God’s angel.

It is personal testimony of hope, healing, and miracles that are often the most effective in bringing others to the faith. Recognizing this, Dann and Tracey are determined to share their incredible story with everyone. They want others to experience God’s love – a love that is more consuming than even the flames of the most horrific fire. They have written a book, Angels in the Fire, to put into words their remarkable experience.

Praise God for His love that sustains us, His might that rescues us, and His good plans that direct us! May we all invoke his name whenever we face a seemingly insurmountable obstacle, remembering that He can and will move mountains – and even cars – for His children.

Watch the video below learn about their spiritual encounter.

For just $100 per month you can bring the gospel to 10,000 homes. Join us as media missionaries! GIVE NOW
VIEW COMMENTS
« Movies with a Message: Cars (2006) Meet Idris: The Richest Man In the World Who Cleans the Streets »