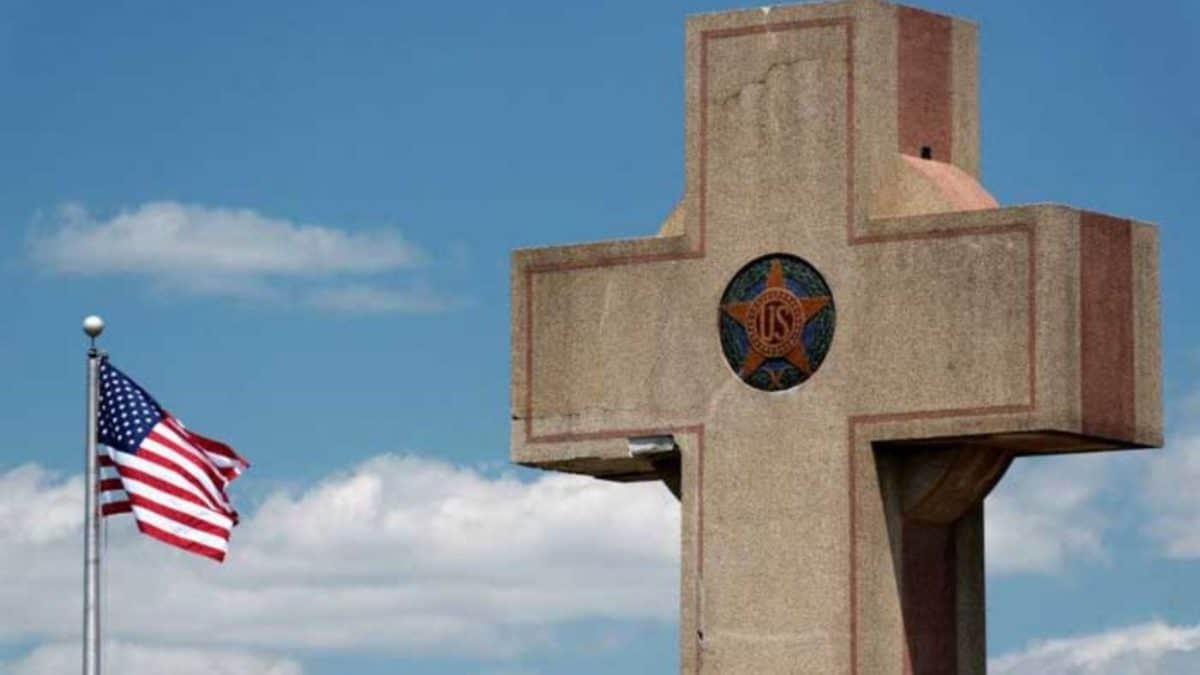 An American Legion war memorial known as the ‘Peace Cross,’ commemorating 49 men from Bladensburg, Maryland that lost their lives in the First World War is to be taken down.

Fox News reported, “The Fourth Circuit said the memorial excessively entangles the government in religion because the cross is the “core symbol of Christianity” and “breaches” the wall separating church and state.” But Chief Judge Gregory wrote, “This memorial stands in witness to the valor, endurance, courage, and devotion of the 49 residents of Prince George’s County, Maryland ‘who lost their lives in the Great War for the liberty of the world.’  I cannot agree that a monument so conceived and dedicated and that bears such witness violates the letter or spirit of the very constitution these heroes died to defend.”

The American Humanist Association filed a lawsuit against the 40 foot tall ‘Peace Cross,’ in 2014. Their organization believes in, “being good without god,” saying the cross was unconstitutional. They want the cross to be altered, demolished or removed.

The AHA said the cross carries, “an inherently religious message and creates the unmistakable appearance of honoring only Christian servicemen.”

The American Legion can and should appeal to the Supreme Court. Their attorney Jones Day said, “This memorial has stood in honor of local veterans for almost 100 years. And is lawful under the First Amendment… To remove it would be a tremendous dishonor to the local men who gave their lives during The Great War.”

Thomas Jefferson Would Stand for the Peace Cross

This isn’t the first case we have seen where an atheistic or agnostic group sues for the removal of a war memorial. And they always cite the ‘separation of church and state,’ stating the cross symbol as a memorial is unconstitutional. But the US Constitution does not use those terms of a ‘separation of Church and state.’

This emerged as a philosophy stated in a letter from Thomas Jefferson to the Danbury Baptist Association in Connecticut in 1802 on how he interpreted the Free Establishment and Free Exercise Clause of the First Amendment to the Bill of Rights.

There has been a lot of discussion on Jefferson’s meaning. But it should be obvious that he was sanctioning that the US government should not establish a controlled State church. But he did espouse the accommodation of religion or the lack of religion. In fact, being part of the Continental Congress, in 1776, he was part of commissioning the first Revolutionary War memorial. In honor of General Montgomery. This memorial now sits at Saint Paul’s Chapel in New York City.

The Montgomery memorial has, “an eagle [drawing] back the American flag from the Western Hemisphere, which is illumined by the 13 rays of the rising sun, while below a weeping cupid among the clouds with inverted torch mourns the hero who fought for this new found world of freedom. And the other side of L’Enfant’s sculpture, the side visible from inside the chapel, is a depiction of the giving of the Ten Commandments.”

In a letter to George Washington in 1786, Jefferson said, “God who gave us life gave us liberty. Can the liberties of a nation be secure when we have removed a conviction that these liberties are the gift of God? Indeed I tremble for my country when I reflect that God is just, that his justice cannot sleep forever.”

Thomas Jefferson, though having his words used out of context in this case, would actually make a stand for it. Not its removal.