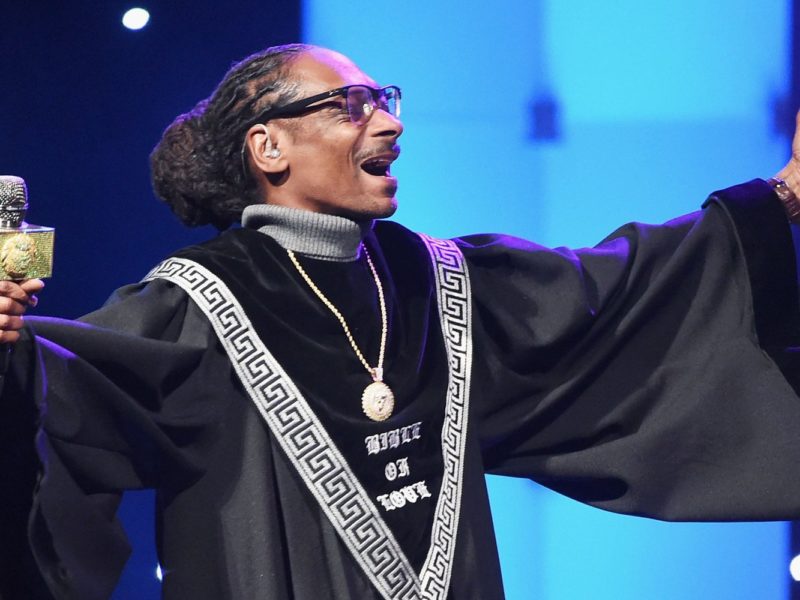 In case you missed it,  dropped a Gospel album.

Bible of Love is the rapper’s 16th studio album and his first Christian album. Snoop Dogg, aka Calvin Broadus Jr, is a West Coast rapper, producer, and TV personality known more for his affiliation with gangs, “pimpin”, and love for cannabis than the religious life. Nevertheless, the 46-year-old Grammy nominated rapper has made a very public statement in 2018 saying he’s found his way back to faith he was brought up in, declaring himself a “born-again Christian”. (This is the backstory testimony any youth group pastor would kill to have.)

Here’s a sample of lyrics from the song “Defeated”:

But as could be expected, there has been a great wave of backlash and skepticism from some in the Christian community. Everything from he’s not saved enough, he hasn’t repented enough, he still profits from his gangster/pimp persona… etc. Many of his harshest critics seem like they’d be mollified if he just changed his image into a clean-cut, khaki wearing church usher and dropped the “street talk” cadence.

So Creflo Dollar, American televangelist, pastor, founder of World Changers Church International, and friend to GOD TV, got a little tired of the self-righteous stone throwers and decided to rebuttal with his own version of the Cast the First Stone speech.

And I say, Amen, Creflo. I think I’ll rant a bit myself.

From what I can hear/read, Snoop Dogg isn’t saying he’s perfect but that he’s recognizing perfect Love. This, my friends, is called Revelation of the Holy Spirit.

Let’s look at some of our Godly men and women of the Bible:

Paul (Saul) killed and imprisoned Christians; David was a womanizer, adulterer, and murderer; Mary Magdalene had her demons; Peter – the Father of theChurch – DENIED JESUS (Hello?) about five minutes after he said he wouldn’t; Rehab was a prostitute.

And these are our heroes of the Bible! The Lord loves a redemption story and through the many stories like this in His Word, He obviously thinks we should too.

Is it our job to be judge? What about your life? What’s your past look like? Anything you’re still struggling with? Did your own conversion result in a sparkly clean, faultless life the moment you surfaced from the baptismal pool? Probably not.

Listen, Church! I was leading a Bible study on Friday and clubbing on Saturday! It took TIME. God saw my heart. He wasn’t put off by my immaturity. He also didn’t need some telling Him, “Did you see what she did? Look at what this girl is up to…” Time. Maturity. Grace. Amen?

We need to be a people who celebrate the prodigals’ homecoming. We need to see the small beginnings of a virtuous life and encourage and bless it!

“But it’s Biblical to call out sin in a brother or sister.”

Yes, let’s look at that flimsy excuse for gossip and slander “biblically”.

“If your brother or sister sins, go and point out their fault, just between the two of you. If they listen to you, you have won them over. But if they will not listen, take one or two others along, so that ‘every matter may be established by the testimony of two or three witnesses.’ If they still refuse to listen, tell it to the church.” (Matthew 18:15-17)

We don’t get a free pass to skip steps one and two just because he’s a celebrity and we can’t get to him.

Let’s be the praying, covering, hopes-all-things kind of Church that says, “Bless you, Calvin Broadus! May the Lord continue to reveal Himself to you and use your amazing gifts for His glory and purposes!”

The opinions here are those of the author’s and do not necessarily reflect the opinions of GOD TV, any other agency, organization, or company.

For just $100 per month you can bring the gospel to 10,000 homes. Join us as media missionaries! GIVE NOW
VIEW COMMENTS
« Then Are You My Disciples, Part 1: Forgiveness The Agenda Of Heaven Is Nations Says Lance Wallnau, Who Predicted Trump Would Be President »