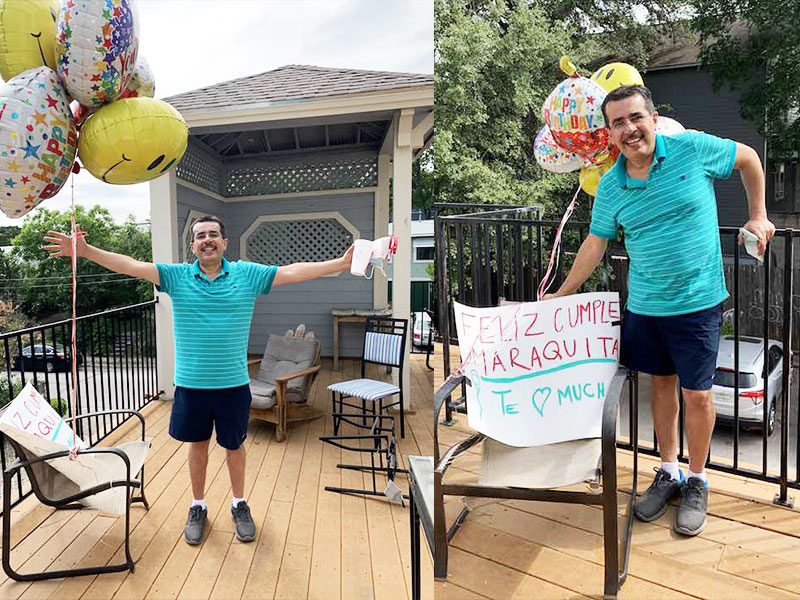 An amazing dad drove more than 1,000 miles so he could give his daughter the best social distancing birthday celebration amid the pandemic.

Julio Cesar Segura hasn’t seen her daughter since winter break. That is why he wanted to see her on her birthday May 8th despite lockdown.

Driving Miles For His Daughter

The 53-year-old decided to go see her and drove 8 and a half hours across Texas from El Paso to Austin.

When Julio arrived, he called her and pretended to have ordered Lerma’s favorite takeaway lunch from Chick-fil-A.

“He told me that since he couldn’t do much he wanted to know what I’d like for lunch and he would send an Uber Eats order,” Lerma told Good News Network. “So I texted him what I wanted—the chicken fillet sandwich with pepperjack cheese, buffalo sauce and mayonnaise.”

Further, she added, “He brings me that sandwich for lunch on my birthday every year—so far, he hasn’t missed a year.”

But what she didn’t know was that her dad took the effort to wake up at 3:30am, so he could be with her.

Lerma believed what her dad told her. When she came out to open the door in her apartment building for whom she expected to be the delivery driver, she was astounded.

Instead, she found her dad standing outside with balloons and a happy birthday sign in hand.

“He showed up with the food and a poster board and balloons. I was so excited. I haven’t seen him in months, since winter break,” she recalled. “Didn’t think that I would see him again until August. He has always been someone who loves gestures, but I never imagined he would do this in a pandemic.”

Then the father and daughter enjoyed their meal together while observing social distancing guidelines. They sat six feet away from each other.

“We went to a little terrace and there were chairs that were really spread out,” Lerma said. “We ate several feet apart.”

After just half an hour celebrating Lerma’s birthday together, Julio drove back to El Paso.

Over all, Julio spent 17 hours on the road round trip, driving 1,152 miles on May 8th for his daughter’s 19th birthday.

“I was the driving the whole day but I was so happy on the way back,” said Julio. “She deserved a good birthday.”

For just $100 per month you can bring the gospel to 10,000 homes. Join us as media missionaries! GIVE NOW
VIEW COMMENTS
« Country Artist Craig Morgan Released An Album Sharing How God Helped Him After Son’s Death You Can Receive The Baptism With The Holy Spirit »