Breaking news coming out of the UK this week, is both astonishing and grave. In what is being considered in the secular world as a ‘landmark decision,’ the Nuffield Council of Bioethics in England – an independent charitable body – has passed, in principle, and opened the ethical door to genetically modifying embryo DNA. LINK.

This decision was reached following the experimentation on 58 embryos which contained a common mutation that causes heart disease – 42 were ‘edited successfully.’ I asked myself how did they select the 58 and what is the proof that the 42 were ‘successful?’ In addition, how many embryos didn’t make it and what was their fate?

Hold on a minute, didn’t someone try to do this once before?

A Master Race in the Making?

Yes. The technology may not have existed but the concept and ideology did. We need only look towards WWII and Hitler’s vision of  the ‘perfect master race’. While the motives may be slightly different, is there the possibility that the result could end up the same way? Knowing man’s history of greed and search for power, there is every chance that this could happen. 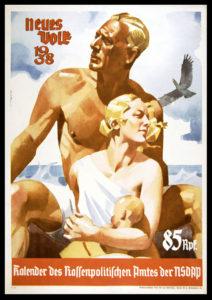 One of Hitler’s Master Race Posters

Hitler’s ‘vision’ was to create a superior race. In his eyes this perfect race would be one, in his opinion, that was void of disability, flaws, certain cultures and creeds. It used the concept of Eugenics as the basic way to endorse his ideals. A way to both improve and maintain the purity of the Aryan master race.

The eugenics concept was promoted by some notables throughout the 1910’s, 1920’s and 30’s – Margaret Sanger, Marie Stopes, HG Wells, Woodrow Wilson, etc. Events would be sanctioned where men and women appeared on stage in swimsuits in eugenic competitions. They would be evaluated by their physical and mental qualities – a bit like a vamped-up beauty pageant.

The Nazis took this to the next level by genetically enhancing the Nordic Aryans and called the project the Nazi Eugenics – with the purpose of creating a super race.  Whilst this generation may look upon this time in history with disbelief in the fact that it could have happened, we cannot afford to underestimate the power of this beast.

Over 6 million plus European Jews, gypsies, gays, the disabled and the sick were slaughtered by Hitler in his mad attempt to get ‘rid of’ the inferior races and make way for his superior army of gentiles. Now, some 70 plus years later mankind finds himself at another precipice. Another major ‘landmark’ decision opens that persistent portal once more. The eugenic ideology, the very one that gave Hitler the license to pursue his Aryan vision for the world, has raised its head again. But I suggest to you, it is another lie. This time around it is being ‘sold’ as a ‘preventative cure’ to get rid of what man deems inferior.

“…life isn’t always rosy, but it is always worth living.” Nick Vujicic

Editing embryonic DNA is a soft term for ‘playing God.’ It is a debased form of manipulation and is, I believe, man’s vain effort to somehow give himself hope and longevity of life. What concerns me also is does this mean that all future babies will be created in a lab?

Thankfully, the Bible offers us real hope. The Word teaches that we are all equal in Christ Jesus and that we have true value and worth.  Each and every one of us are precious to God and we were all created with a predestined purpose – it is God’s divine order of things.

Nicholas James Vujicic  is 35-years-old and an incredible human being. He is an Australian Christian Evangelist and a powerful motivational speaker. Nick travels the 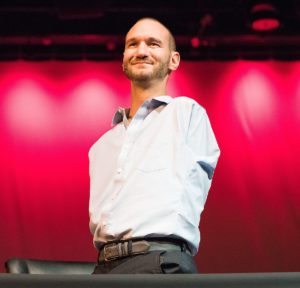 world inspiring others and sharing the Gospel. He was born with a very rare congenital disorder call Tetra-amelia syndrome and his testimony is awesome, moving and humbling.

Nick’s ministry is called “Life Without Limbs.” I challenge anyone to read his testimony or listen to him speak, he makes you look beyond the flesh every time.

So here I am, like all of you observing man as in one hand he insists in destroying life by aborting the unborn, and yet on the other hand he attempts to ‘save’ life by eradicating all known diseases, infirmities and disabilities in humans by manipulating the very building blocks (DNA) of life in the embryonic stage.

So I ask you, what will the consequences of his actions be?

What will become of the human race?

And above all how will we ever explain all of this to God on the Day of Judgement?

We can only pray that Jesus will return…very soon.

“Then I saw a new heaven and a new earth; for the first heaven and the first earth passed away…and He will wipe every tear from their eyes. There will be no more death’ or mourning or crying or pain, for the old order of things has passed away.” (Revelation 21:1 & 4)