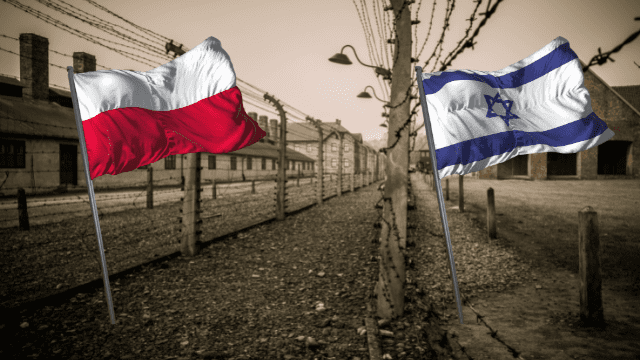 On Sunday, Israel and Poland demanded a meeting with each other’s ambassadors over legislation in Poland that would limit restitution for victims of the Holocaust.

The tensions are not new, but the rift is growing wider between the two nations over the Polish treatment of victims of the Holocaust and their heirs. The bill currently advancing through Poland’s parliament would put a 10-to-30-year limit on the time Jews have to contest past decisions on restitution. It would potentially limit Jews from regaining any property that was stolen as a result of the Holocaust.

Israel’s Foreign Minister Yair Lapid called the legislation “immoral and a disgrace. Polish Prime Minister Mateus Morawiecki fired back, “I can only say that as long as I am the prime minister, Poland will not pay for German crimes: Neither zloty, nor euro, nor dollar.”

History—and who is to blame—is really at the heart of this battle with Poland to “never forget” the Holocaust. Making restitution for the Holocaust is a hot-button topic for many Poles. Poland is the only European Union country that has not made legal provisions for Jews to reclaim or be compensated for private property seized by the Nazis or the communists. Last year, Andrzej Duda, newly re-elected president of Poland, campaigned last year against restitution measures for Holocaust victims.

“I will never sign a law that will privilege any ethnic group vis-à-vis others. Damages should be paid by the one that started the war.” And to be clear, they were suffering from German nationalism and racism against them, as they were seen by the Nazis as an inferior race.

The prevailing attitude in Poland’s nationalist government is that Poland is also a victim of Nazi atrocities. Indeed, millions of ethnic Poles died from fighting or hardships in the war. While many citizens hid Jews or helped them escape—more Poles have been recognized for their heroic actions during the Holocaust than any other nationality—there is much historical evidence that other Poles aided or participated with the Nazis in the murder of 3 million Polish Jews.

Jews were extorted with the threat of being turned in to the Nazis. Property was stolen by Poles when Jews were forced into the ghetto. And an entire Polish police force of 20,000 men ensured the Jews stayed in their ghettos. Before the war, there was much antisemitism. Some politicians had even talked about forcibly removing the 3 million Jews from the country.

Overall, most Polish people today believe that restitution should solely be the responsibility of the German people.

Lapid, whose late father was deported to a concentration camp before being rescued by a Swedish diplomat and whose great-grandmother was murdered in the gas chambers of Auschwitz, had strong words for Poland.

“No law will change history. It is a disgrace that will not erase the horrors or the memory of the Holocaust. The prime minister of Poland should check the facts again. Millions of Jews were killed on Polish soil, and no legislation will erase their memory. We’re not interested in Polish money, and hinting at such is antisemitic.”

World War II and the Nazi reign of terror ended more than 70 years ago. The communist regime that followed ended in the late 1980s. And still, for the last 30 years, Poland has refused to return the property stolen from Jews. The latest legislative move is part of a systemic denial over Poland’s role in the Holocaust over the last several years. Three years ago, Poland passed a law making it illegal to accuse them of being complicit in Nazi war crimes. Earlier this year, President Duda refused to attend the World Holocaust Forum in Israel.

“This law is a slap in the face to what remains of Polish Jewry and survivors of Nazi brutality everywhere. It pains me to say this, but I think that the time has come for the international Jewish community to reevaluate our relationship (Poland),” said Ronald Lauder, president of the World Jewish Congress, representing Jews in 100 nations.

For just $100 per month you can bring the gospel to 10,000 homes. Join us as media missionaries! GIVE NOW
VIEW COMMENTS
« Breaking The Power Of The Category Spirit Neighbors, Friends, and Embassies—Historic Firsts with the UAE and Honduras »