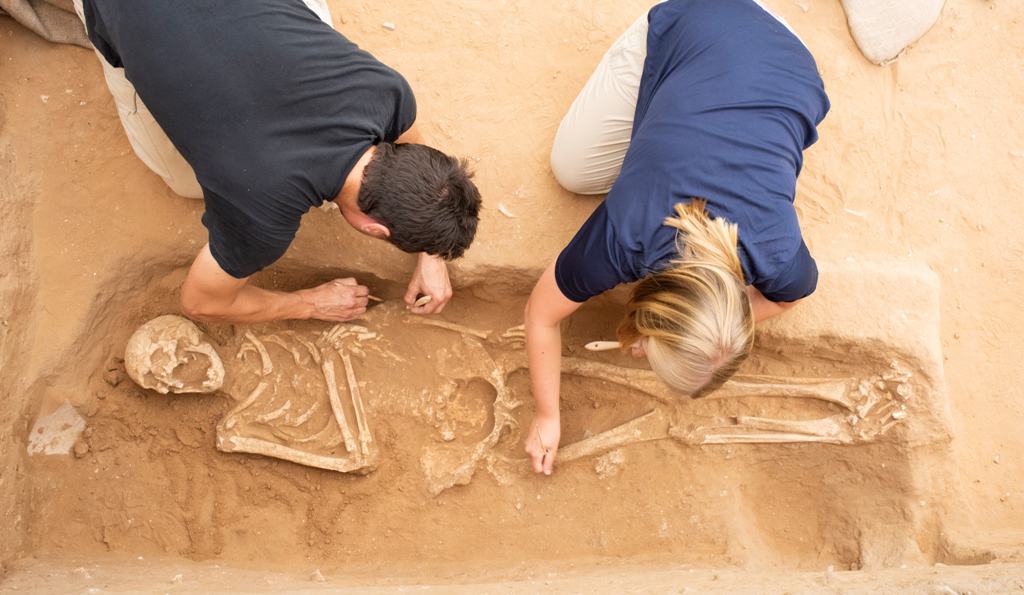 DNA testing of ancient genomes suggests that the ancestors of the Philistines migrated across the Mediterranean and reached Ashkelon by the early Iron Age, a comprehensive study on the subject published Wednesday shows.

An international team from the Max Planck Institute for the Science of Human History and the Leon Levy Expedition Ashkelon announced in Science Advances the findings of a study to determine the provenance of the Philistines, utilizing state-of-the-art technologies on ancient bone samples unearthed during a three-decade excavation in Ashkelon. Analyzing genome-wide data retrieved for the first time from people who lived in Ashkelon during the Bronze and Iron Age, around 3,600-2,800 years ago, the team found that a substantial proportion of their ancestry was derived from a European population.

These genetic results are a critical step toward understanding the long-disputed origins of the Philistines, the research underscored.

This European-derived ancestry was introduced in Ashkelon around the time of the Philistines’ estimated arrival in the twelfth century BCE.

“This genetic distinction is due to European-related gene flow introduced in Ashkelon during either the end of the Bronze Age or the beginning of the Iron Age. This timing is in accord with estimates of the Philistines’ arrival to the coast of the Levant, based on archaeological and textual records,” explained Michal Feldman of the Max Planck Institute for the Science of Human History, leading author of the study.

Daniel Master, director of the Leon Levy Expedition to Ashkelon and head of the archaeological team, said that the new genetic input from the direction of Southern Europe was found in bone samples taken from infants buried under the floors of their homes, as was the custom at the time.

“These infants were not travelers, they are the result of immigration and family building, thereby indicating that their parents did indeed come to the region from overseas in the 12th century BCE.”

Master noted that all the Ashkelon samples used in the research, taken from the Middle Bronze Age, the early Philistines, and the later Philistines found in the Philistine Cemetery, were excavated by teams of professionals who looked at every aspect of their context.

“Not only do we have radio-carbon dating that demonstrates the antiquity of the samples, but we also have stratigraphic evidence. These samples come from carefully-excavated contexts, connected to artifacts that can be precisely dated,” he explained.

The Philistines are famous for their appearance in the Bible as the arch-enemies of the Israelites. However, the ancient texts tell little about Philistine origins other than a later memory that the Philistines came from “Caphtor,” a Bronze Age name for Crete.

More than a century ago, Egyptologists proposed that a group called the Peleset in texts of the late twelfth century BCE were the same as the Biblical Philistines. The Egyptians claimed that the Peleset traveled from the “the islands,” attacking what is today Cyprus and the Turkish and Syrian coasts, finally attempting to invade Egypt. These hieroglyphic inscriptions were the first indication that the search for the origins of the Philistines should be focused in the late second millennium BCE.

From 1985-2016, the Leon Levy Expedition to Ashkelon, a project of the Harvard Semitic Museum and under license from the Israel Antiquities Authority (IAA), took up the search for the origin of the Philistines at Ashkelon, one of the five “Philistine” cities according to the Bible.

The excavations culminated in 2013 with the discovery of the first Philistine cemetery ever to be found.

The team found substantial changes in ways of life during the 12th century BCE which they connected to the arrival of the Philistines. Many scholars attempted to argue that these cultural changes were merely the result of trade or a local imitation of foreign styles and not the result of a substantial movement of people.

The researchers successfully recovered genomic data from the remains of ten individuals who lived in Ashkelon during the Bronze and Iron Age. This data allowed the team to compare the DNA of the Bronze and Iron Age people of Ashkelon to determine how they were related. Each individual produced tens of thousands of data points, allowing for powerful statistical comparisons with other populations. The researchers found that individuals across all time periods derived most of their ancestry from the local Levantine gene pool, but that individuals who lived in early Iron Age Ashkelon had a European-derived ancestral component that was not present in their Bronze Age predecessors.

“This data begins to fill a temporal gap in the genetic map of the southern Levant,” explains Johannes Krause of the Max Planck Institute for the Science of Human History, senior author of the study.  “At the same time, by the zoomed-in comparative analysis of the Ashkelon genetic time transect, we find that the unique cultural features in the early Iron Age are mirrored by a distinct genetic composition of the early Iron Age people.”

However, by analyzing later Iron Age individuals from Ashkelon, the researchers found that the European-related component could no longer be traced. “Within no more than two centuries, this genetic footprint introduced during the early Iron Age is no longer detectable and seems to be diluted by a local Levantine related gene pool,” states Choongwon Jeong of the Max Planck Institute for the Science of Human History, one of the corresponding authors of the study.

This indicates that ancestors of the Philistines migrated across the Mediterranean, reaching Ashkelon by the early Iron Age, but this European-related genetic component was subsequently diluted by the local Levantine gene pool over the succeeding centuries, suggesting intensive admixture between local and foreign populations.

Interestingly, while there was a change in the Philistines’ genetic profile over time, there was continuity in their ethnicity.

“DNA can be a powerful tool to record history and answer historical questions”, notes archaeogeneticist Michal Feldman. “On the other hand, it reminds us that culture or ethnicity do not necessarily equal the genetic make-up of the same groups.”

The Philistines over time have ceased to exist, but their historic footprint was revived by the Roman occupiers who renamed the Land of Israel “Palestine” in the 2nd century in order to humiliate and punish the Jews living there and minimize Jewish identification with the land. Similarly, they renamed Jerusalem Aelia Capitolina.

Until 1948, when the State of Israel was established, Arabs in the region rejected the term “Palestinian,” which at the time referred to both Jews and Arabs, preferring instead to call the Holy Land “Southern Syria,” a backwater province of the Ottoman Empire.

While the name Palestine does not appear in the Koran even once, it’s Hebrew equivalent appears in the Jewish Bible no fewer than 250 times.

In recent decades, the Arabs in Israel who have adopted the Palestinian nationality and supporting historians have attempted to generate a history for them.

“Palestinian” archaeological findings have yet to be found, while the Jews’ close bonds with the Land of Israel turn up on almost a weekly basis.