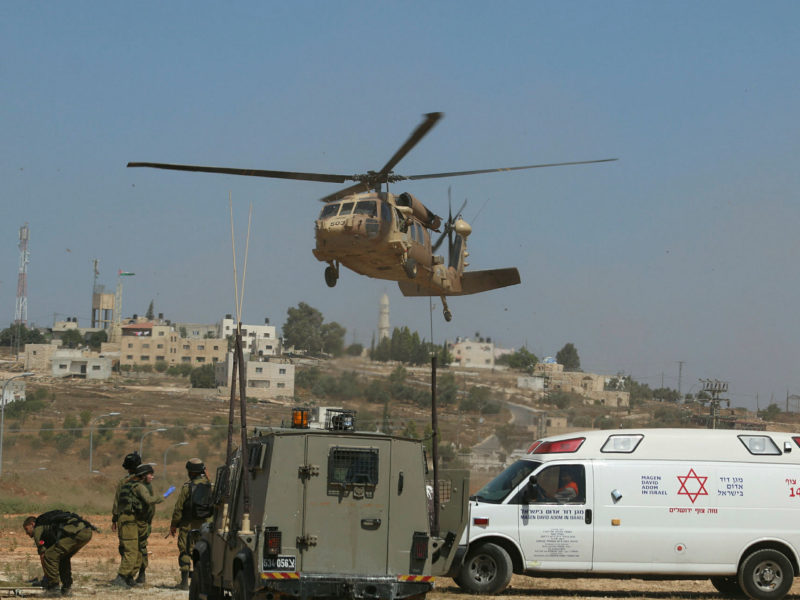 On the night of February 16th, 2013, an IDF squad was carrying out a routine patrol on the Syrian border, when suddenly the patrol commander noticed something very strange – seven seriously wounded Syrians who threw themselves on the border fence.

“We have a situation here,” the young patrol commander radioed his superior with the details, “There are a bunch of Syrians on the fence, and I think they need help, what should I do?” he asked. “Are they wounded?” asked his superior, “Yes” the soldier replied, “well then, what are you waiting for? Help them!”

Thus began one of the most fascinating and challenging of humanitarian endeavors ever to be pursued – Israel’s taking in and and providing medical treatment to wounded Syrians – a country Israel has no diplomatic relations with and is officially regarded as an enemy state. To date, thousands of Syrians have been taken in and treated by Israel.

With about half a million casualties, and over 10 million displaced, the Syrian Civil War is one of the most devastating conflicts since World War II.

Shortly after the war broke out, Syrian President Bashar al-Assad, an optometrist by profession, tried to stifle the rebel forces by destroying hospitals and medical facilities in regions where they were prominent. These actions resulted in 2.5 million civilians living in and around the southern Syria Daraa province having virtually no access to medical care. Closely watching the unfolding situation, Israel decided to take the initiative and work to provide medical care to all those in need. Two basic principles were decided upon: 1 – No Israelis would enter Syria, and 2 – All those who arrive at the border will receive aid.

An army field hospital was set up on the Syrian border as both a treatment center and a crossing point. Injured Syrians would receive medical attention on site, and if further treatment is needed, they’d be transferred to one of several Israeli hospitals in Israel’s northern region. To date, nearly 15,000 Syrians were treated in Israel, with about a third of them being admitted to Israeli hospitals.

While women and children are treated, the vast majority of Syrian patients are actually male – usually of fighting age. The resulting situation is a difficult one in which Israeli medical staff may be providing medical treatment to members of Assad’s military, or even operatives from rebel factions.

The sensitive issue of the identity of some of those treated reached a boiling point in June 2015, when a Druze mob surrounded an IDF ambulance transferring two wounded Syrians to an Israeli hospital near the border town of Majdal Shams. The mob accused the IDF of treating members of the ​Nusra Front, a Sunni rebel faction which has been involved in the killing of Druze civilians in Syria, just miles away. The mob attacked the wounded Syrians, pulling them from the ambulance and beating one to death.

“We have kind of a ‘don’t ask, don’t tell’ policy when it comes to the males,” a medical source at one of the hospitals treating Syrians told Tazpit Press Service (TPS), adding “We are here to treat wounded individuals. We don’t care if they are Syrian Army, rebel forces or farmers. However, we don’t admit operatives from ISIS.”

While the vast majority of Syrians treated are most likely members of some fighting force or another, Israel also treats Syrian woman and children, with procedures ranging from amputation to childbirth. In fact, 28 “Syrian-Israeli” babies have even been delivered in Israel. Upon the ending of their hospitalization period, which lasts an average 12.5 days, those treated are safely transferred back to Syrian territory.

Most of the details surrounding Israel’s involvement with wounded Syrians remains highly classified due to the sensitive nature of the issue. The situation grows further complicated as the Syrian Civil War is dying down, and the areas in the south of the country cease to be war zones and are returning to full Syrian sovereignty.

“These people have no real legal standing, in fact, they technically don’t exist,” the medical source said, adding “They are not prisoners, because they came here by choice, they are not refugees because they aren’t here to stay, they are not tourists either. To us, they are simply people.”

E, a Syrian mother of a teenage boy currently being treated in an Israeli hospital briefly spoke with TPS about how the experience has changed her perception of Israel: “We were raised to think Israelis were demons, we actually thought they had horns,” she said sitting aside her son’s hospital bed, adding “We were wrong, and we are extremely thankful for that.”

For just $10 per month you can bring the gospel to 1,000 homes. Join us as media missionaries! GIVE NOW
VIEW COMMENTS
« How Do You Handle Distress in Friendships? Kerem Shalom Border Crossing Reopened; Liberman Tells Gazans, ‘Quiet Pays, Violence doesn’t’ »