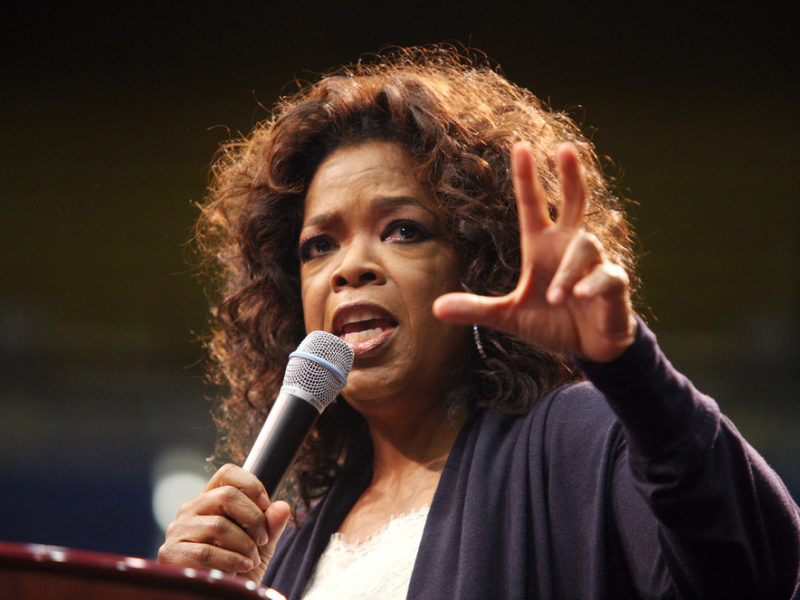 It has recently been reported that ‘global powerhouse’ Oprah Winfrey is supporting the #ShoutYourAbortion initiative whereby women are encouraged to share their abortion stories. Yet, in the current issue of British Vogue, Oprah is quoted as saying “Motherhood is the Greatest Service anybody could offer the planet.”

Let’s face it Oprah is American royalty. Flying to Miami recently I was given a complimentary copy of Vogue at Heathrow. I would have ordinarily declined a woman’s fashion magazine but Oprah was on the cover and she looked magnificent. As I work in media, I like to keep up to date with what people who have a vast following are saying, especially with regard to key issues like abortion.

I took the magazine thinking my wife would like to read it. Inside, in an article entitled ‘Oprah’s Next Act’ she is styled as a princess, wearing a diamond bracelet in her hair. She looks incredible! Then, at Miami Beach I was shown the house she once owned on a private island. Just one of her many properties, seeing that she is worth an estimated $2.6 billion and has her own $50 million jet! Her’s truly is a rags to riches story and an example of someone who has overcome the worst of obstacles to make something of their lives.

According to Decca Aitkenhead’s article in Vogue, Oprah was raped and sexually abused from aged nine, was pregnant at 14 and her baby was born prematurely and died a month later. She had to overcome ‘teenage homelessness and chilling family dysfunction’ and, yet despite all these things she is now at a place where people are actively asking her if she will stand for President. The White House doesn’t seem to be the direction Oprah is going. She seems to be happy enough being America’s richest self-made woman and first black female billionaire. Of course she also heads up her OWN cable network and O magazine.

Oprah is hugely influential and so when she appears to be endorsing a campaign through O Magazine that urges women to brag about aborting their unborn babies, that is a huge concern. The July issue of ‘O’ featured Shout Your Abortion founder, Amelia Bonow in its ‘Inspiration’ section calling women to publicly celebrate abortion using the hashtag #ShoutYourAbortion.

According to LifeNews.com “O Magazine is doing a disservice to its readers by promoting the ‘Shout Your Abortion’ campaign. Bonow’s movement gives the impression that women are glad they aborted their unborn babies. The truth is that some women regret their abortions and others do not, but no matter what the women’s feelings, their abortions destroyed another human being, their own child’s chance to ever have a story.”

While Oprah is the owner of O, I sincerely hope she doesn’t personally endorse Shout Your Abortion. I think that would be completely out of character. When she had the choice of an abortion at 14 she chose to go with her pregnancy. She also knows that the majority of abortions performed in the USA are in the African American community.

While I don’t agree with Oprah’s theology (some have said she is New Age and believes all paths lead to God) or her coverage of Shout Your Abortion –  it’s clear she credits all she has accomplished to God, values life and has the highest regard for motherhood.

“I grew up believing I was God’s child and I had this power because I was His child so I could do anything,” Oprah told Vogue. expounding on her lifelong belief that success is all part of God’s plan.

She knows that it is God who redeemed her life from the pit and how He can turn around the most devastating of circumstances, even in situations where abortion seems to be the only way out. Oprah knows that isn’t true. She also knows how the saving of one life can impact an entire generation.

As Decca Aitkenhead writes: “Though Oprah never had any more children, she still believes ‘being a mother is the greatest service anybody can offer the planet.”

This article was written by Al Gibson who has worked for GOD TV for 16 years, now as content manager and GODTV.com managing editor. Al is a journalist and writer based in England who has some 30 years experience in media. He is also an internationally published author.