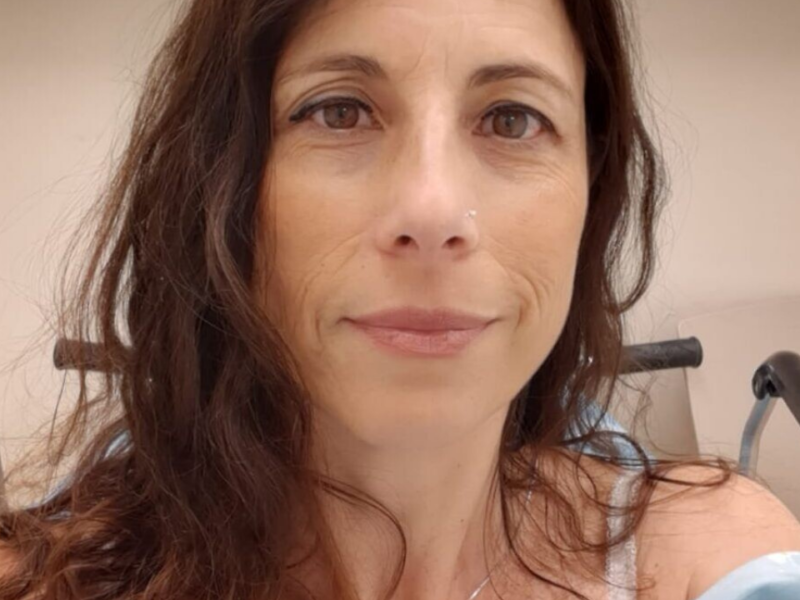 Idit Harel Segal’s grandfather survived the Holocaust. The main lesson out of that tragedy that he imparted to his granddaughter was the importance of leading a meaningful life.

“I wanted to do something big—and what is bigger than saving a life,” Siegel recently told Zman Yisrael, the Hebrew language sister site of the Times of Israel.

Segal, who is 50, made up her mind that she would do a “good deed” by donating a kidney to a stranger in need. However, her husband, father, and other family members were extremely reluctant about her decision. Dash and then it got even more complicated when the next match on the recipient list was a Palestinian boy from Gaza. Segal and her family are all staunch right-wingers. Remember, in Israel, left-wing and right-wing primarily have to do with national security issues and not moral issues like in the US. Right-wingers in Israel are Pro-Israel, pro-defense, anti-land-for-peace deals, etc.

Segal was not deterred by her family’s opposition, though. “I told myself, I’m a strong woman, and I’m going to do it. Something inside me felt like it was the right thing to do.”

Segal and her husband, Yuval, live in the northern part of Israel in Eshbar. They have three children—a son, 23, a middle son, 15, and a daughter, 10. Yuval begged his wife not to have the surgery, according to Segal. But, on the other hand, her children supported her and told her she was a “real superhero.”

Perhaps, the most formidable opposition, though, was from her father. “I encountered wall-to-wall opposition,” Segal said. “The person who took it the hardest was my father, who was really afraid as if I was going to die. He had a relative who died of kidney failure, that could be what spooked him.”

Things got tense between Segal and her dad. He advised Yuval to divorce her over the issue. Father and daughter stopped talking, and the family did not celebrate the Passover seder together.

Segal’s “good deed” became even more complicated when she learned that the next recipient on the list that she was compatible with was a 3-year-old boy, Bilal (not his real name), from the Gaza Strip. The little boy had been on dialysis for most of his short life due to a congenital defect in his kidneys. Unfortunately, none of his family members were able to donate. Finally, his father, a taxi driver, consented to accept an Israeli donor so that his youngest son could move to the top of the list for a lifesaving kidney transplant.

For Segal, this development did not change her resolve to make a difference in the world and honor what her grandfather had taught her. This is quite remarkable, not only considering her political views but also her family history. Segal’s father’s parents were murdered by Palestinian terrorists in 1948 when he was one. Then in 2002, during the Second Intifada, his adopted uncle was murdered in a terror attack in Jerusalem.

“From my perspective, my donation was personal and not political,” Segal said. “And the news of who was receiving the kidney did not make me regret it or reconsider it even for a minute. I felt that this is what was meant to happen, and not a day goes by that I’m not happy about saving the life of that sweet child.”

One day before the operation, a breakthrough happened. Segal’s father called her. “You are my daughter, and I wish you luck,” he said.

“I started crying in relief. I cried so hard I didn’t hear the rest of the things he said,” Segal recalled.

Earlier this month, Segal arrived at the hospital in Petah Tikvah for the surgery. Her first priority was to meet Bilal and his family. The two families bonded in the hospital.

“There was a touching moment when the mother, Bilal, and I were together in their room, and I was caressing him and singing him lullaby eyes in Hebrew… and stroking his head, and on the third song he fell asleep, and so did she. A moment of sweet gentleness. And then I thought to myself, wow, what’s going on here, I’m with a Palestinian woman and child from Gaza.”

“Why can’t the world be like this?” Segal thought as she interacted with the young family from Gaza.

Last month, after Hamas attacked Israel with roughly 4,000 thousand rockets, 1,000 of which were aimed at Elana’s home city, Ashkelon, hitting both my mother-in-law’s building and my brother-in-law’s, we, Messiah’s Mandate/Shelanu donated $10,000 to doctors in Gaza helping the injured. Yes, I know that Gaza is run by terrorists that hate Israel, but I am reminded of the good Samaritan, who helped a Jewish man in his time of need, despite the fact that there had been murderous wars between the two groups. #WWJD?

But the world outside the hospital is still complex and fractured. According to the family, Bilal’s home was destroyed during Operation Guardian of the Walls in the recent war with Hamas. Segal said the families are staying in touch by video calls. The hospital said Bilal is healing and doing well with the transplant.

Segal remains firm in her right-wing beliefs and says her experiences with the family from Gaza have even “strengthened (her) position.”

“Where in the world media will you find a single word about the help they (Palestinians) received from us, the efforts medical teams in Israel are making for a Palestinian patient?”

Segal’s body is mending, and so are her relationships with her family. “They still regret what I did but are happy I am healthy. What matters to me is that I’m 100 percent content and happy with what I’ve done.”

For just $100 per month you can bring the gospel to 10,000 homes. Join us as media missionaries! GIVE NOW
VIEW COMMENTS
« Jewish Man Discovered Yeshua Is The Messiah While Reading His Tanakh Cases Continue to Climb in Israel as Delta-plus Spreads »