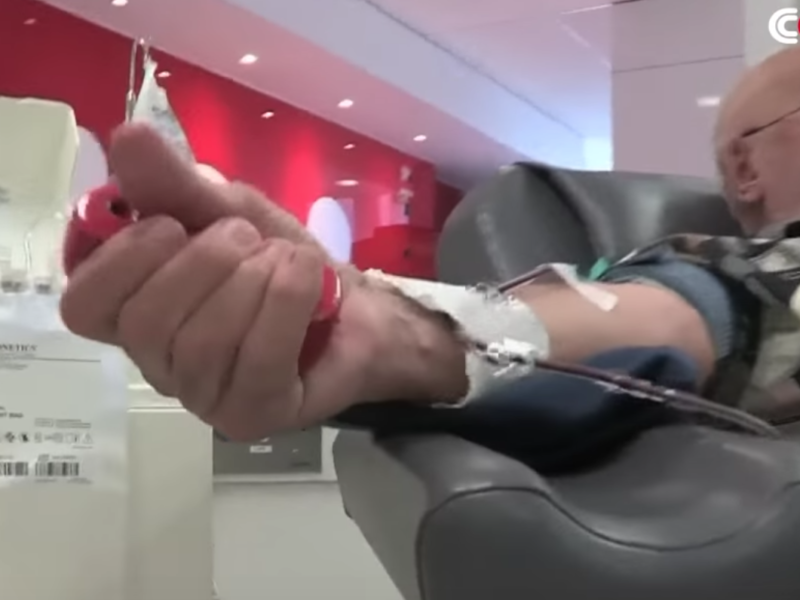 One 81-year-old man in Australia is retiring this month and being celebrated as a national hero. James Harrison is known as the “man with the golden arm” for continually giving his time to donate blood almost every week for 60 years. In Australia, you cannot give blood past the age of 81 so Harrison’s last donation marked the end of a long era in his life.

Harrison has been recognized as a national hero for his donations and has been given several awards, including the country’s top honor, the Medal of the Order of Australia.

“It becomes quite humbling when they say, ‘Oh you’ve done this or you’ve done that or you’re a hero,’” Harrison told CNN in an interview. “It’s something I can do. It’s one of my talents, probably my only talent, is that I can be a blood donor.”

However, Harrison is not just your average blood donor. As it turns out, Harrison’s blood is very unique, containing the very disease-fighting antibodies needed to create the injection Anti-D, which is needed for a condition found in the blood of 17% of pregnant Australian women.

The Australian Red Cross Blood Service estimates that Harrison’s donations have saved the lives of more than 2.4 million Australian babies, who without the injections, would have either died before birth or been born with brain damage.

At the age of 14-years-old Harrison underwent a major surgery on his chest prompting him to begin his “career” of donating blood in order to give back for the numerous blood donations that saved his life. A few years later doctors discovered that Harrison’s blood contained the exact antibodies needed to make the Anti-D injections, making him one of only 50 known people in Australia with this rare blood type.

“Every bag of blood is precious, but James’ blood is particularly extraordinary. His blood is actually used to make a life-saving medication, given to moms whose blood is at risk of attacking their unborn babies,” Jemma Falkenmire, of the Australian Red Cross Blood Service, shared with CNN in an interview. “Every batch of Anti-D that has ever been made in Australia has come from James’ blood. And more than 17% of women in Australia are at risk, so James has helped save a lot of lives.”

Now that Harrison is retiring, Falkenmire is hoping that his story of life-saving generosity will inspire others with the same blood type to begin donating their precious blood.

“All we can do is hope there will be people out there generous enough to do it, and selflessly in the way he’s done,” Falkenmire shared.

For just $100 per month you can bring the gospel to 10,000 homes. Join us as media missionaries! GIVE NOW
VIEW COMMENTS
« Worship, Our Daily Bread: Hallowed be Your Name The Lamb Told Me to “Come!” »