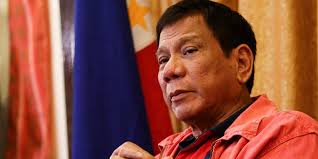 The controversial president of the Philippines, Rodrigo Duterte, known for his strongman politics and inflammatory statements from admitting to killing people to joking about rape, will land in Israel on Sunday evening for a four-day official visit.

He will be the first leader of the Philippines to visit Israel since the countries established diplomatic relations in 1957. Following his four-day visit, Duterte will continue to Jordan.

During his visit, Duterte will discuss tourism, labor and defense deals, and visit Yad Vashem.

Duterte will arrive with a large delegation, including his defense and foreign affairs ministers and more than 150 Philippine businesspeople.

According to a report in Haaretz, the visit will also  include a display of advanced weapons organized by the Defense Ministry. With the Phillipines planning a multi-billion dollar overhaul of its armed forces, Israel will be looking to significantly increase sales of military hardware to the

Last year the Philippines purchased some $21 million worth of radar equipment and anti-tank missiles from Israel. Overall trade ties between the countries are relatively insignificant, currently standing at less than $200 million.

One of the main items on the agenda from Israel’s perspective will be convincing Duterte to move the Philippine Embassy from Tel Aviv to Jerusalem.

“ I will not be surprised if during the visit the president will issue a notice about the embassy’s move to Jerusalem,” Dr. Ofer Israeli, International Security Policy and Middle East Expert at the Interdisciplinary Center (IDC) Herzliya, told TPS. “ Some of the reasons Netanyahu promotes relations with countries that are not completely democratic and provides them a certain rehabilitation is to have more embassies in Jerusalem.”

The Philippines abstained on a United Nations vote earlier this year rebuking the United States for moving its embassy to Jerusalem.

The delegation will also discuss the opening of a direct flight route between ‎Manila and Tel Aviv, with the aim of sharply increasing the number of pilgrims arriving from the predominantly Catholic Southeast Asian archipelago.

According to the Foreign Ministry, the sides will also sign an agreement regulating the employment of thousands of Filipino caregivers and to ‎allow Filipinos to work in Israel’s hotel industry, which suffers from a major manpower shortage.‎

Despite the criticism  Duterte’s visit has sparked in Israel and abroad, the Foreign Ministry issued statement warmly welcoming the visit, minimizing his record of invectives and promoting the role of the Philippines in saving Jews during the Second World War, and commercial and military ties between the countries.

As well as meeting Prime Minister Binyamin Netanyahu, Duterte will also meet with President Reuven Rivlin, meet with Filipinos workers in Israel, and take part in a ceremony inaugurating a monument which commemorates the Philippines’ rescue of Jews during World War II.

For just $100 per month you can bring the gospel to 10,000 homes. Join us as media missionaries! GIVE NOW
VIEW COMMENTS
« Syria Denies Reports Of Israeli Strike On Damascus Military Airport Are You Sufficiently Satisfied? »