Elevator Project Leads To 1st Century Find Under Western Wall; Mosaics Of Bible Heroines And Others Uncovered In The Galilee 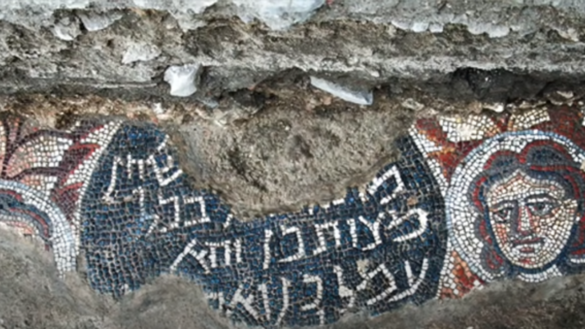 Who knew that an elevator could travel through not only space, but time (except in a movie!)? In Jerusalem, a recent project to install an elevator and improve access to the Western Wall for the disabled uncovered a treasure trove of antiquities dating back 2,000 years—to when Yeshua and the first disciples were there.

Whenever any new construction (from a parking lot to a high-rise) begins in Jerusalem, especially in the Old City, there is usually an archaeological excavation that occurs first, since the city is built layer upon layer, century upon century—you never know what you might unearth.

A team of archaeologists from the Hebrew University of Jerusalem announced this week the discovery of a first-century villa that was just steps from the Temple. It even had its own mikveh (a ritual bath area, like where the apostles immersed the 3,000+ that came to faith on the first Shavuot) overlooking the Temple esplanade.

“This plot of land where the elevator is going to be built remained undisturbed, giving us the great opportunity of digging through all the strata, all the layers of ancient Jerusalem,” said Michal Haber, one of the archaeologists from the Hebrew University.

It has taken the archaeologists five years to examine the structure, as part of a salvage dig in the Jewish Quarter, to make way for the construction of a pair of elevators at the Western Wall.

Why an elevator, you may ask? Millions of worshippers come to the Wall each year to pray, and if you’ve ever been there (if not, we hope you come on the tour next March!), you know that there are a LOT of steps (142 to be exact) or if you can’t do that trek, you can take an alternative route that involves a long detour to another gate nearby.

In 2017, plans for two elevators near the current staircase received approval to improve access for all. “The Western Wall is not a privilege, it’s elemental for a Jew or for any person from around the world who wants to come to this holy place,” said Herzl Ben Ari, CEO of Jewish Quarter Reconstruction and Development Company. “We have to enable it for everybody.”

For the last five years, the construction project has been in the hands of the archaeology team. They have dug down about 30 feet—and 2,000 years. And while the excavation is almost completed, it will still take another three years before the elevators are ready and open to the public.

Along the journey back through time, the team found pipes from an Ottoman Empire aqueduct that brought water from Bethlehem into Jerusalem. There were also early Islamic oil lamps. They unearthed bricks from the Roman legion that besieged Jerusalem and camped there after they destroyed the city. And they uncovered the ruins of a Judean villa, with ornate frescoes, detailed mosaics, and gigantic dressed stones, that was standing when the Temple was demolished in 70 A.D. The archaeologists also found traces of the Aelia Capitolina, the city Rome built on top of the ruins of Jerusalem in the 2nd century.

And recently, up in the Galilee region, archaeologists digging at a synagogue in the ancient Jewish city of Huqoq discovered a 1,600-year-old mosaic depicting Deborah and Jael (Yael in Hebrew—same as one of my daughters!) (Judges 4), two women who were instrumental in bringing about Israel’s deliverance in a battle with the Canaanites.

The team of archaeologists, led by Professor Jodi Magness, University of North Carolina at Chapel Hill, have been at the site since 2011 (with a pause during the pandemic). The group has unearthed several mosaics of various well-known Bible stories over the last 11 years The mosaics at the ancient synagogue often utilize multiple panels or scenes to tell the story. The account of how the prophetess Deborah (along with Barak) and another woman Jael defeated the armies of Sisera (sent by the Canaanite king) is told in three panels.

“This is the first depiction of this episode and the first time we’ve seen a depiction of the biblical heroines Deborah and Jael in ancient Jewish art. Looking at the book of Joshua, chapter 19, we can see how the story might have had special resonance for the Jewish community at Huqoq, as it is described as taking place in the same geographical region—the territory of the tribes of Naphtali and Zebulun,” Magness said.

Over the years, the team has unearthed several other panels as part of the excavation of the 5th century, Late Roman period synagogue. They have found scenes of the parting of the Red Sea, Jonah being swallowed by three fish, one after the other, scenes from Samson’s life, the construction of the Tower of Babel and even the four beasts in Daniel’s vision.

A few years ago, Magness and her team discovered a depiction of the 12 spies scouting out the Promised Land, carrying a cluster of grapes on a pole (we actually have that scene from Numbers on a logo for the Ministry of Tourism). At the time (in 2018) she said,

“The synagogue just keeps producing mosaics that there’s just nothing like and is enriching our understanding of the Judaism of the period. Every village has its own synagogue. In Huqoq, there’s a feeling that the villagers said, ‘We’re going to build the biggest and best.’ It’s as if they decided to throw everything into it.”