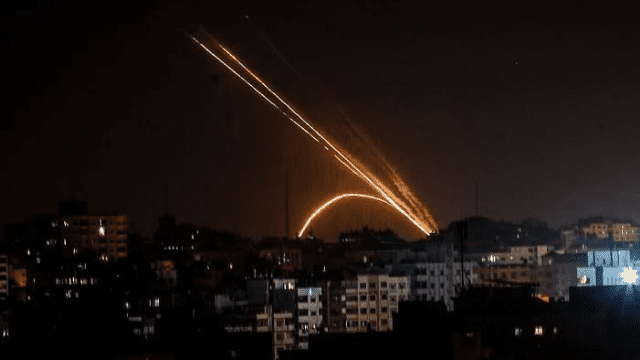 War in Israel continues, a week and a half into the conflict launched by the terrorist group Hamas on May 10. More than 3,700 missiles have been fired out of Gaza, primarily toward Israeli communities in the south and central regions, including the densely populated Tel Aviv.
The Israel Defense Forces (IDF) said the Iron Dome anti-missile system has had a 90 percent success rate in deflecting the attacks. Twelve people in Israel have died in the conflict so far, including an 89-year-old woman and a 5-year-old child. Countless other Israelis who have endured days of indiscriminate bombings and nights sleeping in shelters are suffering from trauma and PTSD.
Last week, the IDF began Operation Guardian of the Walls as a countermeasure against the attacks dozens by Hamas. The Israeli military has targeted dozens of weapons-smuggling tunnels, terrorist headquarters, and other strategic combatant targets. An estimated 219 Gazans, including women and children, have been killed in the fighting, some resulting from Hamas rockets falling short of their goal inside Israel.
One Israeli airstrike targeting a tunnel resulted in several buildings collapsing. Forty-two people were killed, and dozens were buried under the rubble. Israeli military spokesman, Jonathan Conricus, said the IDF is adjusting its strategy to prevent a recurrence of such incidents and minimize the deaths of civilians. And yet, it is Hamas that is building terror tunnels underneath civilian populations.
World leaders and others in the United Nations Security Council are increasingly calling for a cease-fire. However, Israel’s Prime Minister Benjamin Netanyahu told foreign ambassadors on Wednesday that Israel is “not standing with a stopwatch.”
“We are taking care of the operation’s objectives,” Netanyahu said. “We are engaged right now in forceful deterrence, but I have to say, we don’t rule out anything. We hope we can restore quiet; we hope we can restore it quickly. I want to say that we’re doing that while doing our utmost to avoid civilian casualties.”
US President Joe Biden is urged Netanyahu yesterday to “de-escalate today” and bring an end to the war, which is the latest in a series of conflicts since 2005 when Israel pulled out of Gaza after liberating it in 1967 from Egypt. Egypt controlled Gaza from 1948-67 and did nothing to lift the people out of poverty. Over the last week, President Biden’s administration has repeatedly blocked a UN joint statement condemning the fighting, and Biden has stated he supports Israel’s right to defend itself.
As the war continues, Israel has also had to fend off attacks to the north. A few rockets have been launched from the Lebanon/Syrian border. On Wednesday, four missiles were launched out of Lebanon toward the major industrial port city of Haifa. Sirens sounded, and Israelis had to run to bomb shelters. The IDF was able to deflect all the incoming rockets; no damage was reported.
In addition to the rocket barrages and the fighting in Gaza, Israel has also had to deal with violent internal clashes between Arabs and a small number of radical Jews in cities across the nation. There have been riots and unrest in Jerusalem, Lod, Akko, Tiberias, and many other mixed Arab Israeli communities. So far, at least two people have died, hundreds have been wounded, almost 1,000 people have been arrested, and close to 300 police officers have been injured. Synagogues have been vandalized or set on fire.
On Tuesday, Palestinians in the West Bank (Biblical Judea and Samaria) and other parts of Israel staged a mostly peaceful work strike to show solidarity with Hamas. Arab stores in the Old City shuttered their doors temporarily, but in Ramallah, Bethlehem, Hebron, and other towns, the strike turned violent as protestors burned tires and clashed with soldiers at checkpoints. Palestinian authorities reported that two people died and 140 were injured. The IDF said that two soldiers suffered gunshot wounds to the legs.
At the same time, there have been many peaceful demonstrations displaying unity between Arabs and Jews in Israel. For the most part, 99 percent of Israel’s Jewish and Arab population get along. We all have the same dream—to provide for our families and live in peace.
In fact, in the midst of war, Israel CONTINUES to send in humanitarian aid to the people of Gaza.
To better understand some of the underlying dynamics of this current conflict, be sure to read my article addressing HBO’s John Oliver’s recent commentary on the war.

For just $100 per month you can bring the gospel to 10,000 homes. Join us as media missionaries! GIVE NOW
VIEW COMMENTS
« Mobile Bomb Shelters Can Save The Lives Of Israelis, But There Aren’t Enough God’s Word For You Today: God Is Able To Do Above And Beyond What We Ask »