BREAKING
Israel-led Team Solves Mystery Why Lightning Strikes Fewer Times Over The Ocean...
Tourism In The Holy Land Is Soaring Back Up To Pre-Pandemic Highs
Lapid Speaks Directly To Palestinians—Offers Them “Another Way” Out Of The Ongoing...
Home Israel EU, France Build Illegal School For PA Arabs In Israeli Area C

written by The Israel Insider September 25, 2020 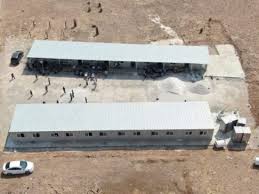 The European Union (EU), the French Consulate in Jerusalem, the Agence Française de Développement, and the Palestinian Authority (PA) inaugurated on Tuesday a new building of Furush Beit Dajan Secondary Mixed School, illegally constructed and located in Area C in the Jordan Valley, under full Israeli control and jurisdiction as per the 1994 Oslo Accords.

The Agence Française de Développement provided €350,000 for the construction and furnishing of the school development and expansion. The contribution was channeled through the European Union Area C Development Programme that facilitates illegal Arab construction in Israeli areas in Judea and Samaria.

“In Palestine access to quality education is a huge challenge, and particularly in Area C where Palestinian children not only lack proper facilities but also face many hurdles in going to their schools. Therefore, we are proud to inaugurate this new school here today,” said the EU Representative Sven Kühn von Burgsdorff.

He repeated his call on the Israeli authorities, “as the occupying power, to respect their obligations under international humanitarian law, with a view to ensuring the welfare of the Palestinian population under their control”

The EU explicitly notes in its announcement that the new school building is part of the EU and Member States support to “developmental interventions in Area C.”

The EU claims that all its activity in Judea and Samaria is fully in line with international humanitarian law. The EU also works with the PA to “develop Area C and support Palestinian communities.”

The Israeli Regavim Movement, which monitors illegal Arab construction in Judea and Samaria, noted that the EU’s have no similar designated fund for infrastructure in Areas A and B under full PA control.

It further pointed out that the school’s location was carefully chosen as the connecting link between the Bedouin outposts scattered throughout the area, which now form an all-new illegal settlement bloc in Area C.

“The structure is one more case of the Palestinian Authority’s proven method: Dozens of workers arrived at the site in the evening and worked through the night – and by morning, dozens of children were already sitting at their desks,” Regavim said.

“The newest illegal school in the Jordan Valley was built at lightning speed, and it was already up and running by the time we spotted it,” said Meir Deutsch, Director General of Regavim.

“It joins a network of similar structures, among them the new schools in Kisan and Kochav HaShachar that were built in the past month, and more than 50 other illegal schools that have been built this way over the past decade,” he said.

“The method is the same each time: Build quickly, and at the same time as the building welcomes its first pupils, petition the High Court of Justice to block law enforcement action at the site. In every case, the courts have issued temporary orders that freeze the situation on the ground and bar the authorities from either shuttering or demolishing the structure,” he noted.

Regavim has told TPS that the “real story” with these EU-funded projects is that they are part of the Fayyad Plan activity.

“The PA is focusing efforts there in order to choke off the growth and development of Jewish communities in an area that has always been in the Israeli consensus,” Regavim stated.

“According to international law, according to the Oslo Accords, according to Israeli law – no matter how you slice it, the EU is funding illegal activity that is undermining the rule of law and eroding Israeli sovereignty, leading the area down a collision course, and setting the stage for conflict rather than compromise and negotiation,” the Israeli organization added.

In 2009, then-prime minister of the PA Salaam Fayyad laid out the Plan for the Creation of the State of Palestine, a methodical program for seizing control of territory in Area C, under full Israeli control as prescribed by the Oslo Accords, to form a broad and viable basis for a Palestinian state, specifically in the areas under Israeli control.

Fayyad’s plan essentially bypasses all negotiation or compromise with Israel and creates facts on the ground.