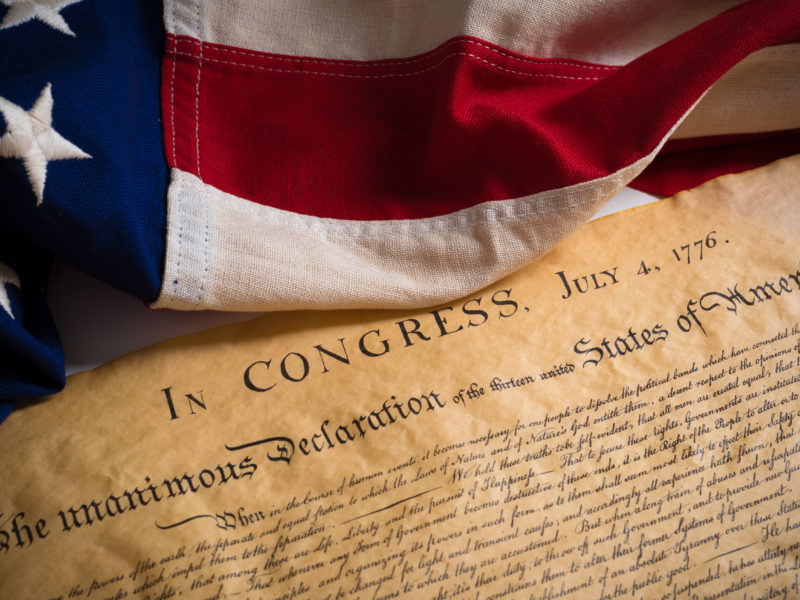 Is this just wishful thinking on behalf of a billionaire property magnet, who, much to many people’s dismay, is now “the Leader of the Free World”? Or is this acknowledgement of God as sovereign, a move away from politically correct lip service to today’s multi-faith society, to a genuine return to America’s Christian roots?

Certainly, faith is the opposite of fear and President Trump’s words are an encouragement to all who may be fearful of the future. His words challenge us to be courageous despite whatever hurdles the new administration may face – to have faith in God and to have faith in ourselves.

How good and pleasant it is when God’s people live together in unity.
– Psalm 133:1

President Trump not only acknowledged God in his inaugural speech, unlike other Presidents, he also spoke of God as Creator and quoted from the Bible – recognising the importance of unity amongst God’s people. He also talked about thinking big and dreaming even bigger, and how God breathes life into our dreams.

During the inauguration bold prayers were offered in the Name of Jesus, turning political correctness on its head. Let’s not forget the US naval chaplain who was discharged for praying in Jesus name or Franklin Graham being uninvited to a prayer service at the Pentagon.

Thankfully things are different now and Franklin was asked by President Trump to deliver a benediction at the inauguration. It was a poignant moment when Franklin commented on the rain that had started to fall when President Trump arrived on the podium, saying it was a sign of God’s blessing. He then unashamedly delivered a mini gospel message, giving a clearl picture of salvation. “There is One God, One Mediator who gave His life as a ransom for all,” he quoted, ending his prayer “In Jesus name””.

Paula White-Cain went a step further and prayed in the name of the Father, Son and Holy Spirit. She thanked God for His blessing on America as a land with a rich history of faith and fortitude, and prayed for the President to have, “the wisdom to lead this great nation, the grace to unify us and the strength to stand for what is right and honourable.”

She quoted Proverbs 21:1, “The king’s heart is in the hand of the Lord, like the rivers of water; He turns it wherever He wishes,” and she asked God to give President Trump the confidence to lead the nation in justice and righteousness.

No matter what beliefs Donald Trump may personally hold, it’s clear the new President has restored a focus on faith that has sadly been lacking in recent American leadership. For believers this gives us immense hope, that God’s blessing will rest upon the USA, opening up new avenues of revival, and it implores us to be prayerful for the new President, trusting God that His will, will be done to right many wrongs in the world.

For unbelievers, and those who carry signs like “He’s not my president,” we cannot ignore their concerns, but there is hope for them too, because the new president has set a righteous standard that he seems committed to follow. “We will let our way of life shine as an example for everyone to follow,” President Trump declared.

This echoes the words of Samuel Rodriguez who read from Matthew 5, referring to the Beatitudes as a standard for Christian living and urging all people to be the light of the world.

“Let your light so shine before men, that they may see your good works and glorify your Father in Heaven.” (Matthew 5:16).

Let’s pray that President Trump really does shine, that he delivers on his promises to give power back to the people and stop the American carnage brought about by poverty, gangs and drugs. May he be used to make the nation unstoppable and may he deliver on his oft-quoted election pledge “to make America great again.”

In conclusion, is faith Donald Trump’s Trump card? (That valuable resource used to gain advantage.) His election victory certainly surprised many, but not those who prophesied he would win. Many Christians believe God intervened in the US Election and has called President Trump as a modern day Cyrus to accomplish His plans and purposes. Trump’s pro-life stance is the reason many people of faith supported him and it’s encouraging to see all the Christian leaders he has surrounded himself with, including the Vice President.

Christian Media Watch discusses Donald Trump and Faith in an article entitled “Did God Intervene in the US Election?” with some encouraging conclusions.

“Trump is in no way perfect. He is deeply flawed, but he is not beyond forgiveness nor is he beyond change. He has said a lot of disturbing things for many people, but hopefully He is going to be a President for all people. We must also consider who he places around him. Patricia King said she felt Trump’s running mate was going to play a key role with Mike Pence as a God-fearing Joseph to Trump as Pharaoh.

“Whether Trump is a new believer as many Christians have speculated or he is as pagan as Pharaoh, God is obviously using him. One immediate thing Christians can glean from him, is his courage. It’s time for God’s people to be brave. To rise up courageously and stop being so afraid of the global elite and its agenda to rule the world. Let’s hope, like many Christian media outlets have said, that a Trump presidency opens up the possibility for revival to come to America and to overflow to the world.” (Source)

Let’s not be fearful. Let’s have faith. Faith trumps fear.

For just $100 per month you can bring the gospel to 10,000 homes. Join us as media missionaries! GIVE NOW
VIEW COMMENTS
« How To Know God’s Will For Your Life Trump, Obama and the Rain »