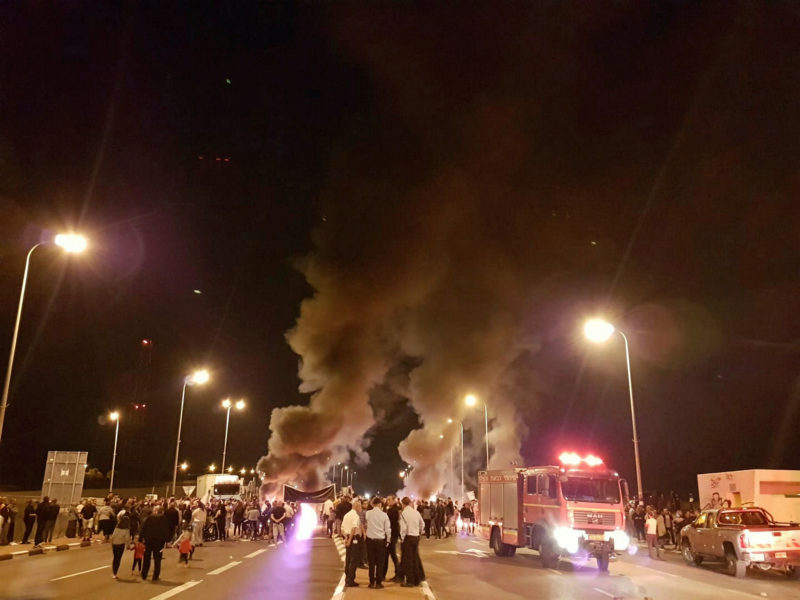 Naama Shaul’s anger is almost palpable. The 39-year-old mother of three from Kibbutz Nir Am in the Gaza Belt is furious at what she sees as the government’s limp response to the latest round of rocket fire launched at the region by Hamas and Islamic Jihad and its subsequent decision to accept a ceasefire.

“I am tired of Hamas deciding what my day is going to look like,” says Shaul,  who was one of hundreds of people who turned out Tuesday evening for a demonstration at Sderot Junction where anger against the government boiled over. “The feeling is that we are puppets in the hands of Hamas. They decide when to strike, and they decide when to ceasefire,” she said.

Israel had agreed a ceasefire with Hamas earlier Tuesday after 48 hours during which Hamas and Islamic Jihad fired some 460 rockets and mortars fired at Israeli communities in the south, stretching as far as Ashkelon.

While Shaul makes very clear that she feels pity for the Gaza Strip residents, the majority of whom are  who are not affiliated with Hamas and live in deplorable conditions, she thinks that Israel should make clear that every rocket attack will be met with an overwhelming response.

“I want Hamas to think a thousand times before launching a rocket, not partying and handing out candies in the streets,”  Shaul told TPS shortly before Defense Minister Avigdor Liberman said he was resigning over the government’s “capitulation to terrorism.”

Shaul works as family therapist in the Kibbutz where she lives and has the feeling that even though people in the area are used to outbreaks of violence, this time they were pushed over th edge.

“We have to make our voice loud. People are at boiling point,  we feel as if we are transparent. For the past six months, we have suffered rockets, incendiary balloons, and attempts to penetrate the border. We are all traumatized, Shaul said.

The greatest challenge residents face, she says, is to return to normality after a few days of  war.

“ Yesterday evening I told my girls to get prepared for school, and they couldn’t believe I was asking them to behave normally after two days of crazy stress… Those sharp transitions are very hard. Fear takes a heavy price, we are always in state of  alert, every noise startles us. I hope for a better future,” she said

Adel Ramen, 63 years old from Kibbutz Nirim further south, is also angry at the government, which she says is doing nothing to develop a strategy for a long-term solution to the continuous attacks from the Gaza Strip.

“Since the 2014 war, the Movement for the Future of Western Negev, that I am part of has been trying to  get a political solution on the table of a government that is doing nothing to develop any strategy. I don’t know what the solution is: international support or something else, but is clear to me that military action cannot solve the problem” she said.

“We live in limbo “ continued Ramer. “It is not normal that every Friday the violence gets out of hand. I know people that every Friday are prepared to leave home because know that there will be rockets, ” she told TPS.

Ramen, an English teacher, says Gaza Belt residents have to find a way to get their voice heard and increase t awareness of  the situation both in Israel and abroad.

“Today I had to teach an English poem to my students, but we couldn’t concentrate. So we  spoke about the power of the voice of young people and the importance of telling what we are going through to everybody. It was a very touching moment,”  she said.

For just $10 per month you can bring the gospel to 1,000 homes. Join us as media missionaries! GIVE NOW
VIEW COMMENTS
« Liberman Resigns, Calls for Early Elections Dramatic Turnaround Sees Moshe Lion Elected Mayor Of Jerusalem »