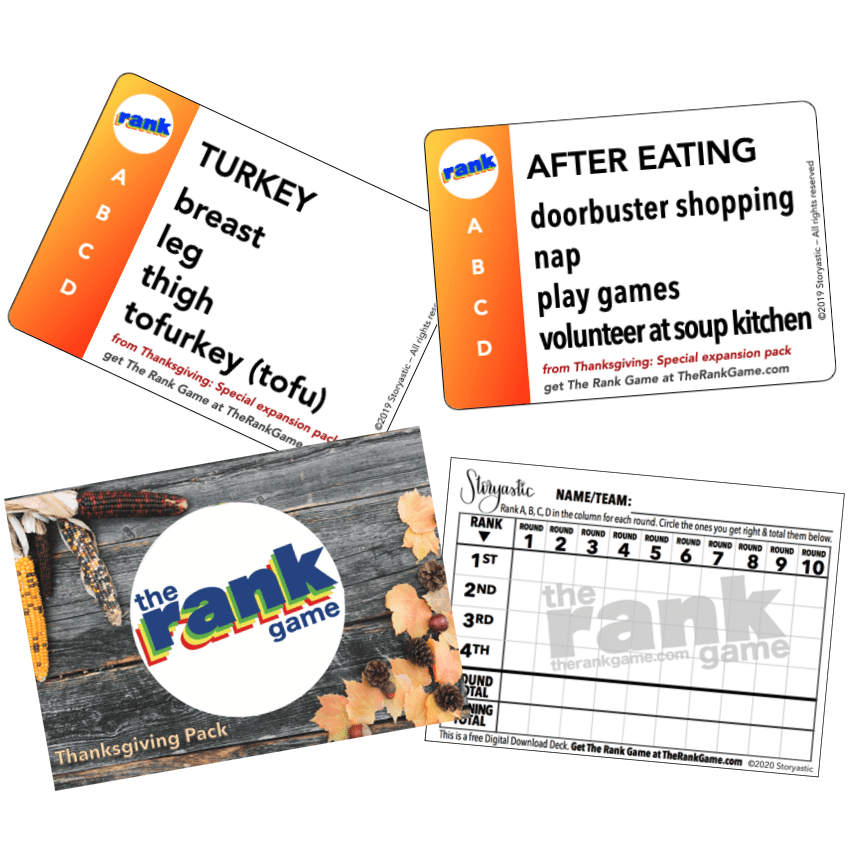 My in-laws came into town for Thanksgiving week a few days ago and my wife, Dana, literally lied in front of the whole extended family during dinner. We were all playing The Rank Game during dessert and Dana, a former Walt Disney Imagineer and current interior architect and homeschool mom, was up first as the Ranker. She drew the topic card: ‘ENTERING POOL’ with the choices “dive, jump, slide, wade’. She discretely filled out her score card with her preferred rank of the choices and the rest of us ‘guessers’ wrote down the order that we thought she would write down.

She began the ‘reveal’ of her ranking, “Okay, the topic is ‘entering pool,’ my first choice is dive…” Our three kids exploded with belly laughs!

“I have NEVER seen you dive into a pool, Mom!” our 11 year-old son shouted.

“What? I taught YOU how to dive!” she retorted.

Dana looked to our 18 year-old daughter to come to her defense. “Umm, I said you ranked ‘wade’ first. That’s how I’ve always seen you enter a pool,” our daughter sheepishly shared.

For the past 20 years, my family and I have played “The Rank Game” as a means to drive fun conversation on road trips, while waiting in lines, even at restaurants while waiting for our food… anytime we found ourselves with idle time and nothing to do. Dana has amazing Disney Imagineering experience of entertaining Disney World guests during all the little moments throughout the day that would otherwise be boring. She used that expertise to develop The Rank Game’s gameplay so players have easy prompts to be able to share about themselves with the people most important in their lives. The game works as an ice breaker for new relationships, too.

Last spring we were playing The Rank Game at a restaurant in Mexico and the tables on either side of us asked their waiter if they could play at their tables. The manager of the restaurant came to our table and we all sunk low, ready to be admonished for being too loud. The manager asked what we were playing, and in my best solid-citizen, courtesy voice, replied, “We’re playing The Rank Game. Sorry if we’re being too loud.”

“Where can I buy The Rank Game?” the manager shot back. “We want to put it at all of the tables.” The mariachi band kicked in, and our perfect evening in Mexico proceeded.

We get that question pretty much every time we play The Rank Game in public. It’s happened in line for rides at Disney World and others end up playing along with us. On a tour bus in Germany one summer, seventeen of my extended family were guessing my nephew’s preferred order of classic rock bands and other people on the bus started chiming in, passionately listing their preferred rankings. Within minutes, all 44 passengers had a score card and were playing The Rank Game in the “Icebreaker” game mode.

For the past several years, we’ve relied on The Rank Game as a way to combat the allure of smart phones, seeking to tech less and talk more. The seduction of screen time is not only a problem for kids—work and social media pings call out to us adults ALL. DAY. LONG. Our little family of five uses The Rank Game topic cards around our dinner table to prompt conversation between us, without the scoring element of the game. We’ll just pick through cards and grab one that feels right. We leave the phones in the other room, and, with the help of The Rank Game topic cards, engage one another.

Other families with whom we have shared The Rank Game use the game in similar ways. One friend of ours said she learned that her 12 year-old son’s favorite dinner is barbecue chicken, and couldn’t believe she didn’t learn that in the previous decade. A dad we know shared that he really wouldn’t know what to talk about with his kids without The Rank Game topic cards.

Another friend of ours hosts dinner parties and hides a specific topic card under each salad plate, so that after the salads are eaten, the plates are removed and everyone gets the chance to share something about themselves, by ranking the items on their topic card. What’s really cool, is that the host selects specific cards for each person’s place setting so it’s rather personalized. And, the timing during the dinner is perfect because by the time people finish their salad, they’ve pretty much run out of the basic type of information any of us would share at parties where you’re meeting new people.

I suppose the thing in common with all of this, is that we all feel awkward, or need some level of ‘help’ in driving conversation, sometimes with strangers, but sometimes even with those in our own family. And, also, when we’re bored, we need to fight the urge to reach for our phones, and instead reach for someone else in our life. All those opportunities easily come up during Thanksgiving with extended family and friends, and The Rank Game is the perfect ‘tool’ for highly energized fun infused with making meaningful moments during the holidays.

I never would have guessed a ‘party game’ would be one of the most useful tools for helping us tech less and talk more, but I’m honored and humbled that our fun little thing called The Rank Game has become exactly that. Although it’s gratifying to know a game can be a tool to facilitate conversation and help people use the mundane moments of life to enrich their relationships, it’s also quite comforting to know that everyone that plays The Rank Game finds it to be competitive and really fun to play!

GODTV has a special “friends & family”

discount code for THE RANK GAME!

on The Rank Game and all expansion packs!