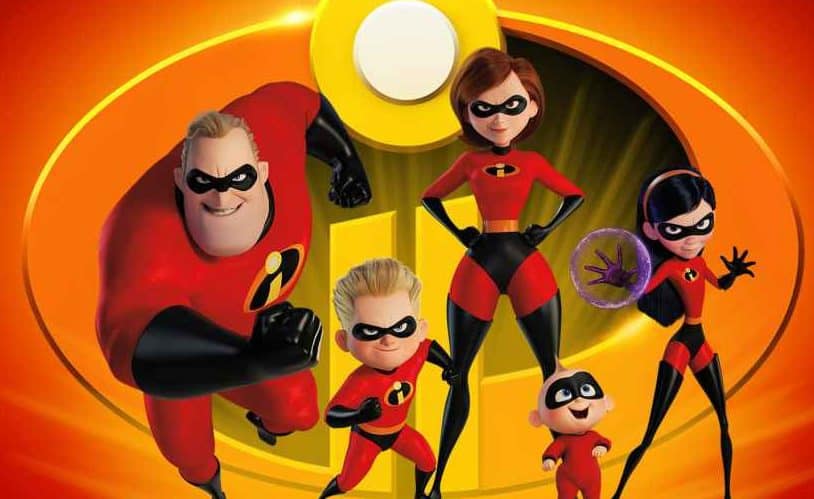 Brad Bird’s The Incredibles is my favourite Pixar film. It is also the only Pixar film other than Toy Story which I thought could benefit from a sequel. Now Bird has finally revisited his masterpiece, the big question can finally be answered: is this as good as the original?

The short answer is no. However, Incredibles 2 is still a visually eye-popping, thrilling, funny and clever animated superhero adventure. The story picks up directly from the end of the previous film, with a fight against a villain called the Underminer (a character I am sure is inspired by something I saw in an old Flash Gordon cartoon).

Following this, a telecommunications tycoon and his sister decide to do something to help superhero PR, and get the law banning superheroics overturned. However, they opt for Helen Parr aka Elastigirl (Holly Hunter) over Bob Parr aka Mr Incredible (Craig T Nelson) to kickstart their campaign. Thus, Bob gets to be a stay-at-home Dad, juggling teenage problems with his daughter Violet (Sarah Vowell), homework problems with his son Dash (Huck Milner) and baby problems with Jack-Jack, whose numerous newly discovered powers prove a recurring comic highlight of the film (look out for one particularly hilarious moment involving a racoon).

Vocal performances from the leads are all good. Elsewhere favourite supporting characters such as Frozone (Samuel L Jackson) and costume designer Edna (Bird himself) return. The animation is stunningly rendered, especially during action scenes (an early motorbike chase is a must on the big screen). Design wise, the film continues the retro/parallel 1960s look of the original, an element enhanced by Michael Giacchino’s deliberately 1960s James Bond style music score, echoing the late, great John Barry.

All that said, Incredibles 2 fails to match the original, mainly because the villain isn’t anything like as strong as Syndrome (arguably the greatest, best motivated villain ever dreamed up by Pixar). Yes, the Screenslaver concept works reasonably well in a Manchurian Candidate kind of way, but the identity of the big bad is obvious from the word go, undercutting dramatic heft for the big reveal. Once said reveal occurs, the villain’s motivation is also rather weak.

On the plus side, the film has fun with Mr Incredible’s feelings of emasculation, although he ultimately copes well being the stay-at-home parent. Positive themes of families working together are continued from the first film, and mercifully this doesn’t degenerate into a preachy gender equality statement.

I particularly liked the scene where Helen argues about the illegality of superhero work, whilst Bob points out the law is sometimes wrong, and that doing the right thing can mean breaking the law. I’ve never been one for slavishly following rules just because they are the rules, so that gave the film a few more points in it’s favour, as far as I’m concerned.

In the end, Incredibles 2 may not match the original, but it is still a worthwhile sequel with plenty of entertainment value for all the family.