Movies With a Message:The Lives of Others (2006) 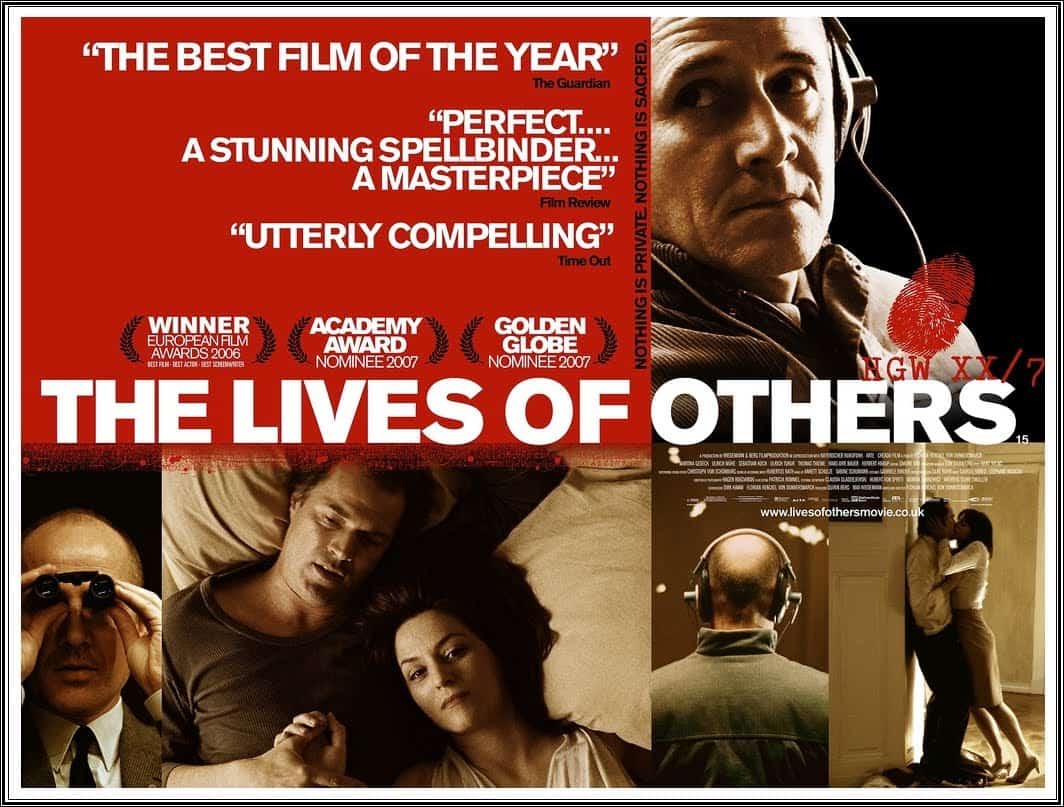 If you’ve done nothing wrong you’ve got nothing to fear. Or so the argument goes when politicians make the case for more surveillance. But I doubt any intelligent person will be able to say that with a straight face after viewing The Lives of Others – a riveting tale of redemption set in a communist state that treated every citizen as a potential enemy: former East Germany.

When The Lives of Others won best foreign language film at the 2007 Oscars, I was initially dismayed. I had not yet seen the film, but surely nothing deserved to beat Pan’s Labyrinth. Lamenting the Academy’s snobbery when it came to genre fiction, I went into The Lives of Others when it finally got a UK release some months later determined to dislike it on principle.

Two hours and seventeen minutes later, I emerged from the cinema speechless. The film I had just seen had not only proved outstanding on every conceivable artistic level, it had also quietly but powerfully affirmed everything I believe politically and spiritually, as well as deeply moved me. There are times when great films transcend mere brilliance and become something quite personal, and this was one of those occasions. Much as I still love Pan’s Labyrinth, I have to concede that The Lives of Others deserved that Oscar more.

The 1984 East Germany setting is a neat nod to George Orwell, as Stasi Captain Weisler (the late, great Ulrich Muhe) is assigned by corrupt politician Hempf (Thomas Thieme) to place loyal-to-the-State playwright Georg Dreyman (Sebastian Koch) under surveillance. Hempf wants dirt on Dreyman, so he can make his secret relationship with Dreyman’s girlfriend Christa (Martina Gedek) more permanent. The odious Hempf already has his claws in her, blackmailing her and asking for sexual favours in exchange for drugs.

At first, Wiesler is shown to be a ruthlessly cold secret policeman, exceptionally good at his job. However, as he watches Dreyman, he develops a respect and admiration for him. Slowly cracks begin to appear in Wiesler’s harsh exterior, and he starts to unravel – reading Brecht, listening to Beethoven and becoming sympathetic to Dreyman and Christa in their plight. Eventually he feels compelled to secretly intervene and persuades Christa to stop seeing Hempf when Dreyman discovers the affair. Unfortunately, this act causes Dreyman to re-think his loyalty to the State. He plans to publish an article in West Germany about East German suicides after his blacklisted stage director friend Jerska (Volkmar Kleinert) kills himself. Wiesler discovers this plot, but feels dangerously compelled to keep looking the other way, even though his boss Grubitz (Ulrich Tukur) gradually becomes convinced that Wiesler is hiding something.

I really cannot summon adequate superlatives when it comes to this film. It is affecting on every conceivable level; at once historically fascinating yet relevant, dramatically gripping, blackly comical, thought-provoking and quietly touching. All the performances are superb, especially from Muhe who gives new meaning to the terms subtlety and nuance. Florian Henckel von Donnermarck, directing his first film, paints an appropriately drab and grim portrait of East Germany, and cinematographer Hagen Bogdanski makes great use of space to characterise his subjects. For example Wiesler’s large but depressingly sparse apartment reflects his own emptiness, whilst Jerska has a small room surrounded with books, reflecting how his own learning has trapped him. Every other aspect of the production is superb, from Patricia Rommel’s crisp editing to Gabriel Yared’s haunting music score.

As a slow-burn, intelligent political thriller, The Lives of Others is absolutely first-rate. As a serious look at life in former East Germany, it is nothing less than bone-chilling. As a timely reminder of the evils of totalitarian dictatorships, state interference in private matters, unnecessary surveillance and the cost in innocent lives, it is uncomfortably prescient. But as a parable of redemption, this is one of the most quietly powerful and profoundly moving films I have ever seen.

At one point near the beginning, Hempf tells Dreyman that people never change, but Wiesler spends the film proving him wrong. In brilliantly understated fashion, the film shows the journey this cold, cruel but desperately lonely man undertakes as he rediscovers his humanity, eventually doing the right thing despite the cost. And although the film is not directly about faith, if that’s not a redemptive message, I don’t know what is.