Finding Joy And Hope After A Miscarriage | God TV
Family 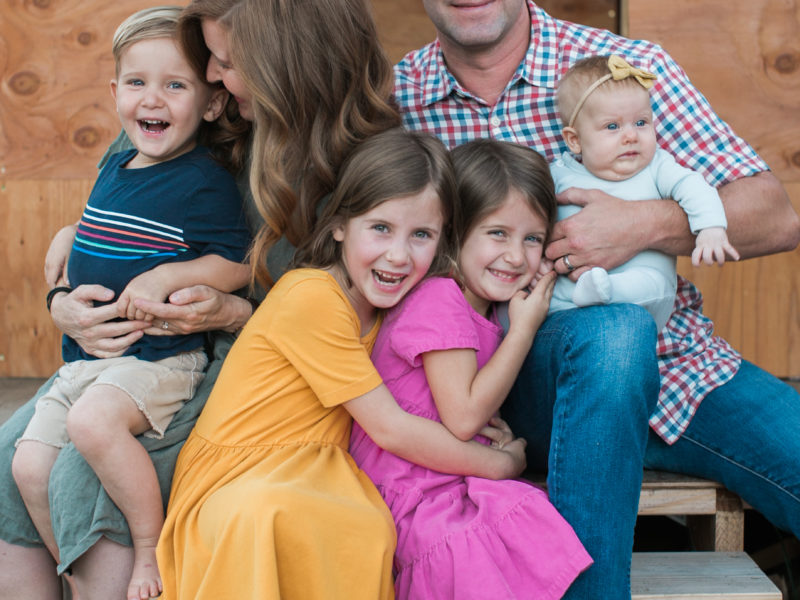 When I lived in San Diego, almost a decade ago, I had the privilege of a very close friendship with Erin Illingworth. She is a sister in Christ and I have learned so much about God’s love and grace from her.  Erin has four absolutely beautiful children, but the road to completing her family was not always easy. She had a miscarriage before her first baby was born and a miscarriage before her second baby was born. Then when Erin found out she was pregnant with her fourth baby, she rejoiced that she was having twins! Only to find out a few weeks later that she miscarried one of the babies.

Despite losing three babies in utero, she has turned her tears into dancing and is still thankful that the Lord allowed her to experience those losses. She feels it is a blessing she can walk other women through miscarriages of their own. I interviewed her below about her healing process with the goal that her experience would help others find healing and hope on their own journey after miscarriage.

1. How did you sense God’s presence through, during, and after your miscarriages?

“With my first two miscarriages, God’s community really carried me through. Honestly, I felt angry with the Lord so I wasn’t coming to meet with Him right when it happened.  We know God never draws away from us.  If we feel distant from Him, it isn’t Him, but it is us drawing away from Him. That was the situation. I wasn’t drawing close to Him at all because I was so angry.

My main comfort came from my Christian community. And that is why I tend to be pretty vocal about my miscarriages.  I tell a lot of people about what happened because if another person is going through that same situation and is also angry with God, I want her to feel comfort from somewhere. If you have a godly community it is a good place to find comfort for that short period of time.

Later, when I emerged from the intense grief of that first miscarriage, I felt God’s presence through playing worship music.  I didn’t pray a lot because I was angry still and I had a hard time knowing what to pray for, but playing worship music is where I really felt the Lord.

With my third miscarriage, the twin, I was hearing from the Lord.  Because in that situation, having two miscarriages already and being in a place where I could be thankful for them, I was able to draw near to Him.  So, I was hearing from Him,  ‘This is a promotion,’ is what He spoke, ‘just trust me.’  I felt Him more because I was drawing near.” 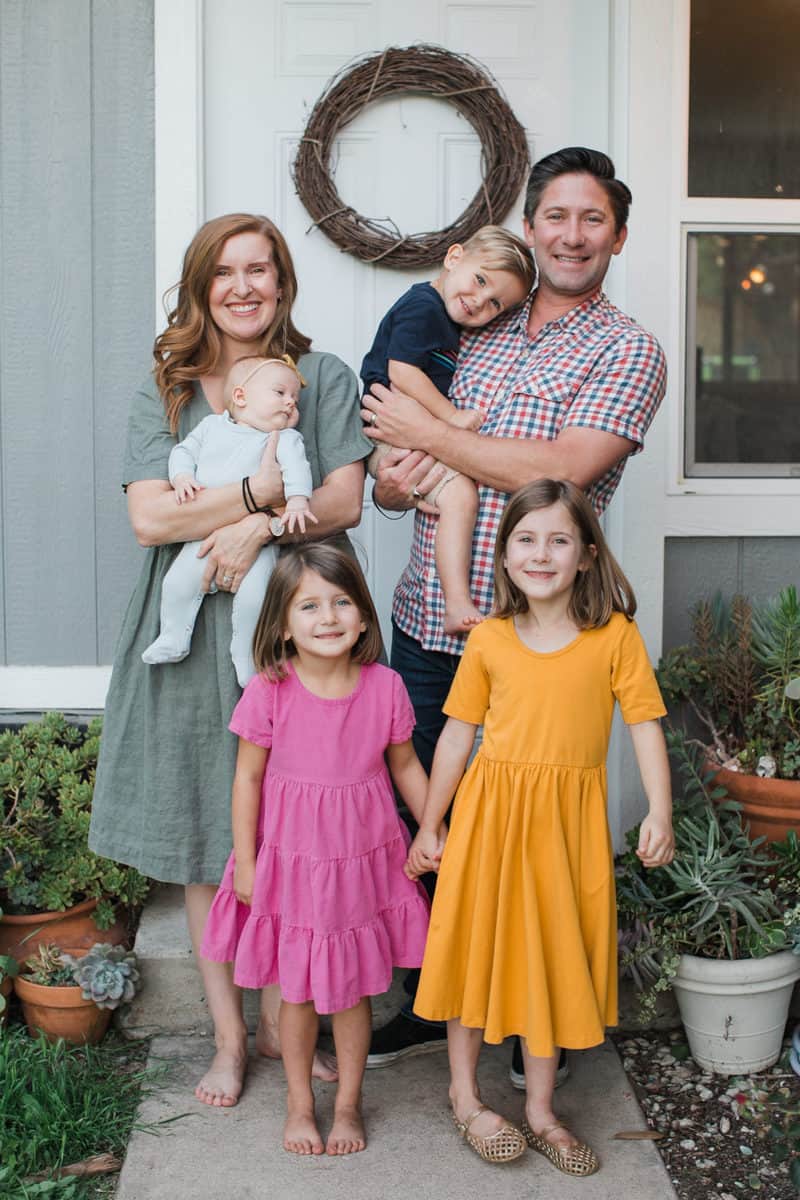 2. Now that you have 4 children how did you see God’s hand in miscarriage?

“Now that I am not in a place of grief anymore, and I processed my miscarriages well, I am able to see how God is working in them still.  He is going to allow us to go through trials.  I don’t think He gave me the miscarriages, nor did He allow them for us.  It is a part of being in a fallen world.  He allows tragedy to come into our lives because it is always going to refine us and make us stronger.

It brought me to a new place where I can empathize with others. I can empathize better even with others that are going through a different tragedy that isn’t related to a miscarriage or infant loss, any sort of tragedy. It helped me remember that you don’t have to compare losses or grief.  Someone who lost a baby at 6 weeks is still extremely devastated, even compared to someone who lost a baby at 20 weeks. It doesn’t really matter. They are both valid. And that helped me because one of my miscarriages was earlier on and one was later on.

Mystery Of The Lord

It helped me be able to live in the mystery of the Lord.  Up until that point, there had only been one or two other times in my life where something happened in my life that I couldn’t understand at all.  I couldn’t answer the ‘why’ question.  I dealt with, ‘Why is the Lord allowing this to happen to us?’ Even when I miscarried the twin, I thought, ‘Why did you show me, two babies, if, in the end, I was only going to get one?’ And it helped me deal with the fact that sometimes we have to live in the mystery of God’s plan and that sometimes we just aren’t going to have an answer until we get to the other side of Heaven.

And I think now, as a result, I have gotten to a place where I can live in that mystery. I am not going to say, ‘Now I know how to do that!’ Because I know there will still be more trials in my life, but now I am better at living in the mystery.  I know I have gotten better at that and it will help me further long.  When something else happens and I can’t answer why, I can say, ‘I have already been able to stand on this.  I know that even though this happened He is still good.’ So, if something happens and I don’t know why I am able to say that now.”

3. What would you tell someone to encourage them when experiencing their own miscarriage?

“A lot of people don’t like to talk about miscarriage.  They don’t feel like the world sees it as ‘that bad of a loss’ that allows them to mourn. They see that other people lose children that have been born on Earth, or they lose their babies further along in pregnancy, or they lose other family members.  And miscarriage is so common, that the commonness makes it seem like it is ‘not that bad of a loss’.

I also tell people, ‘Don’t feel like you have to put on a happy face.  It is okay to be sad. And it is okay if you don’t go to someone else’s baby shower for a bit, or you don’t bring meals to the new mom.’ One thing that I felt while I was helping someone else go through a pregnancy loss when I was pregnant, and she was having a really hard time celebrating me, I told her, ‘That’s okay!

Everyone else in my life was celebrating me and my baby.  Just because you can’t celebrate me, that is okay.’ She was going through her process, I am not going to be mad at her for that.  There is enough celebration going around and I didn’t need her to celebrate me.  That said I don’t think you should live that way for a year, or two years, but for 3 or 4 months, it is appropriate to hold your boundary lines and not push yourself to cover it up and put on a happy place when you just aren’t there yet.

4. Anything else you would share with someone experiencing a miscarriage?

I remember my friend had gone through 3 of her own losses.  She lost a baby at 20 weeks, twins at 15 weeks, and had one early miscarriage.  When I was going through my second miscarriage she told me, ‘You are going to get to a place where you are like, ‘Wow, God, you love me so much that you allowed me to go through that!’.’ And I was like, ‘Ummmm no.  I am not going to get there.  That is not going to happen.  You may be able to see that, but you are just spiritually crazy.  I am never going to get to a place where I say, ‘Thank you, Lord, for letting me get here.’ But now I do thank Him for my losses! She would say, ‘I told you you would get there!’

“You have turned my mourning into dancing for me;
You have taken off my sackcloth and clothed me with joy,

That my soul may sing praise to You and not be silent.
O Lord my God, I will give thanks to You forever.”

For just $100 per month you can bring the gospel to 10,000 homes. Join us as media missionaries! GIVE NOW
VIEW COMMENTS
« What It Means To Seek & Crave Christ God’s Word For You Today: Be Grateful »