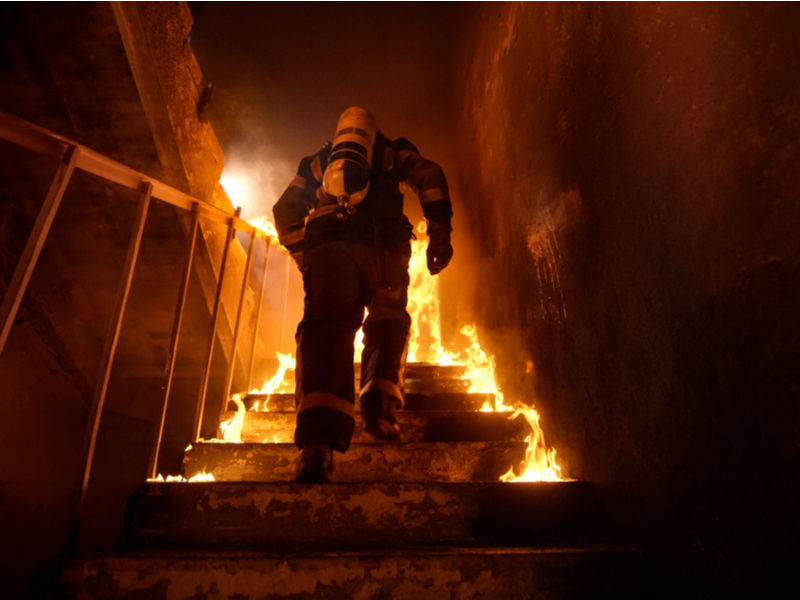 A firefighter is sharing the miracle that happened when he got trapped for 7 minutes in the midst of the raging fire. “Prayer works,” he said as he credits God for the rescue.

In a podcast interview, Los Angeles Fire Department Captain Cheyane Caldwell told Jason Sautel his story. The captain’s testimony served as the premiere episode of the Edifi’s “Jesus Is All We Need” podcast.

Caldwell recalled the life-changing moment in 2007. His team responded to the call when a one-story building in California caught fire.

They immediately went to the scene. But, the fire was already out of control.

The Christian firefighter climbed over the roof to assess the situation.

Caldwell fell through the decking and into the fire. “[I] fell about 13 or 15 feet into the structure. A ball of fire came out of the hole I created, so you can imagine what was underneath me,” he said.

He woke up with the blaze surrounding him and saw that he had no escape. “I thought three things in my mind clear as day: ‘Okay Lord, I’m in here all by myself. Second, ‘Lord, this is it. I’m ready’ — and lastly, my life just went before me all on a DVD in fast order.”

For 7 minutes, Caldwell suffered under the intense heat. While he thought that it was supposed to be the end, God had other plans.

Caldwell’s captain made an unexpected call. He instructed the other firefighters on the roof to blast water in the hole Caldwell created. He later explained that God prompted the decision. “It was like God was speaking to me. God told me to take this hoseline and put it into the hole.”

The captain’s gesture turned out to be what saved Caldwell’s life. He said, “What he did was like water from heaven.”

They were able to rescue Caldwell, and amazingly, after 10 months of recovery, he was back in service.

Since then, Caldwell grabs every opportunity to tell of God’s miracle in his life. After reflecting on the entire ordeal, he sees how God held him right in the palm of His hand.

“There’s no reason I should have survived, but I … give all glory to my Lord and Savior Jesus Christ for what he did on that day. There’s no luck involved. There’s no coincidence — it’s all providence and providence is defined as God’s hand at work for a later activity or mission.”

For just $100 per month you can bring the gospel to 10,000 homes. Join us as media missionaries! GIVE NOW
VIEW COMMENTS
« Passover And Holy Week Intersect, Reminding Us Of A Complicated History God’s Word For You Today: You Are Powerful »