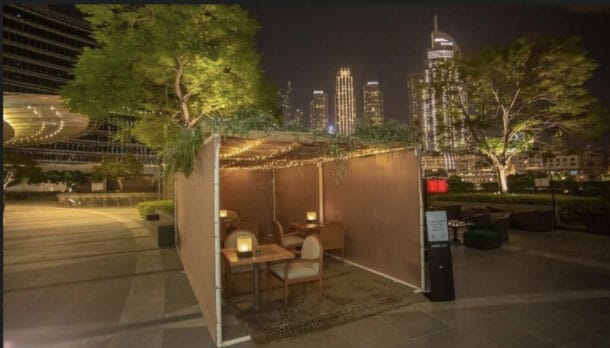 One of the most visible signs of Israel’s peace agreement with the United Arab Emirates came during the Jewish holiday of Sukkot: A public sukkah was erected in front of the world’s tallest building, Burj Khalifa in Dubai — an amazing and first of its kind gesture.

Dubai’s local authorities, security forces and the Jewish community worked together to build the traditional tent that represents the Feast of Tabernacles holiday. The head rabbi of Dubai’s Jewish community, Rabbi Levi Duchman, unveiled the sukkah before the holiday began last Friday evening.

“The Jewish community here lives in safety and peace thanks to the authorities,” Duchman said. “In the sukkah, as well as in the synagogue, we will pray for authorities’ success and for the health of Mohammed bin Zayed bin Sultan Al Nahyan, the crown prince of Abu Dhabi.”

The gesture follows the historic signing of the normalization deal between Israel and the UAE signed in Washington on Sept. 15, brokered by the Trump administration. Israel also signed a normalization agreement with Bahrain on the same day.

In addition to the sukkah, several UAE ministers and other Emirati personalities posted holiday greeting to Israelis for the High Holy Days starting with Rosh Hashanah, the Jewish new year. In fact, Khaleej Times, a UAE English daily, published a large Rosh Hashanah feature which included kosher recipes, an explanation of the Jewish calendar, an article on tolerance and a calendar of Jewish holidays with their dates on both the Gregorian and Hebrew calendars.

This comes less than a month after hotels in Abu Dhabi, one of seven emirates that constitute the United Arab Emirates, were instructed to provide kosher food to their guests in anticipation of Israeli and Jewish visitors following normalization of ties with Israel.

The Abu Dhabi Department of Culture and Tourism said Tuesday in a statement “that all hotel establishments are advised to include kosher food options on room service menus and at all food & beverage outlets in their establishments.”

This is amazing considering not even every establishment in Israel would be considered kosher.

For just $100 per month you can bring the gospel to 10,000 homes. Join us as media missionaries! GIVE NOW
VIEW COMMENTS
« Some Want To Go Back To Egypt And Some Want To Bring Egypt With Them Viral Handyman Who Asked For Work On Streets Now Gets New Apartment For Family »