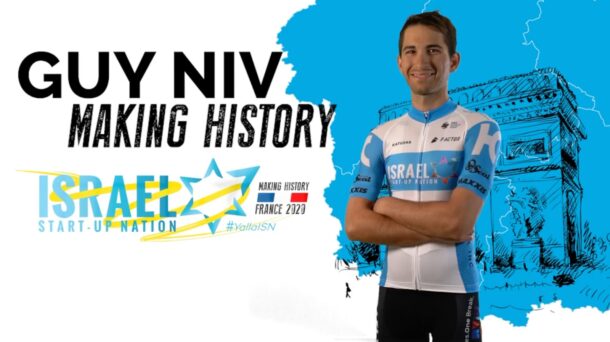 He may have placed 139th but Israeli Guy Niv was proud to become his nation’s first cyclist to complete all 21 stages of the Tour de France this week, finishing the race in nearly 93 hours.

“I felt shivers when I crossed the finish line on the Champs-Elysees. It was a sense of vast relief and sheer happiness: I have done it for the next generation of young Israeli cyclists. They can now dream of achieving this and more,” Niv said.

The Israel Start-Up Nation (ISN) cycling team, Israel’s first professional cycling squad, made its debut in the world renowned race this year. Team owner Sylvan Adams promised that Israel would be back.

“We are just getting started,” Adams added.

His teammates and ISN directors were amazed at the ease with which Niv tackled his first Tour.

“Guy impressed us all,” said the team’s sports director Eric Van Lancker. “He knew that the whole country – Israel – was looking up to him, and he dealt with that pressure admirably. We are proud of him.”

“I dreamed about racing in the Tour as a kid. I even witnessed it as a spectator on the side of the road. Now, I hope that this dream will be shared by many Israeli kids who will follow my footsteps and surpass me,” Niv said.

In other good sporting news for Israel, a mixed martial arts and kickboxing champion from India is making aliyah to Israel and will represent the Jewish state in international competition.

“I have always dreamt of making aliya to the Land of Israel and I am very excited at the prospect of doing so,” Obed Hrangchal, 26, said in a statement

India’s national champion in several martial arts is a member of the Bnei Menashe Jewish community. He will immigrate with his parents and sister after the fall High Holidays and also plans to serve in the Israeli army.

The Bnei Menashe (Sons of Manasseh) are believed to be descended from the tribe of Manasseh, one of the 10 Lost Tribes exiled from Israel more than 2,700 years ago.

For just $100 per month you can bring the gospel to 10,000 homes. Join us as media missionaries! GIVE NOW
VIEW COMMENTS
« Israel Prepares For Yom Kippur, Sukkot Services Under COVID-19 Restrictions Teen Writes Note To God To Help Her Go To College, And A Minister Miraculously Finds Her Note »