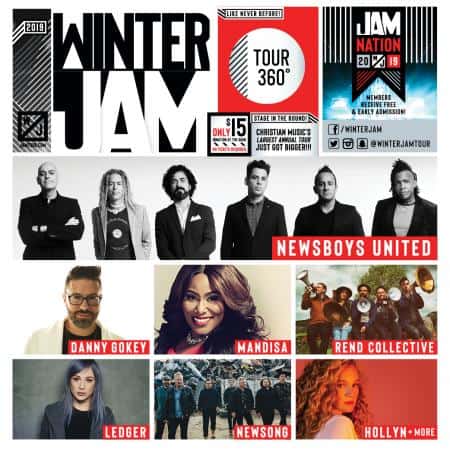 Winter Jam is the most attended Christian Concert tour in the world and has the track record to prove it.  For over two decades, the tour has brought together hundreds of thousands of people and featured some of the biggest artists in the industry including TobyMac, Skillet, Hillsong United, Lecrae, Lauren Daigle, Newsboys and more.

The Winter Jam Tour Spectacular which takes place from January 11th to March 31st promises something larger than ever before… a completely redesigned tour with one incredible lineup. Premier Productions and Newsong will be introducing Winter Jam Tour 360! With the stage in the center, everyone will be that much closer to the artists and enjoy an even better view from anywhere in the arena.

Premier Productions owner, Roy Morgan, says that this is one of the biggest changes that Winter Jam has ever seen and that no one has ever seen the tour like this! The move is innovative, new and unlike any other Winter Jam or concert tour experience that you have seen before.

One special perk to this year’s lineup is none other than LEDGER! LEDGER is Jen Ledger of Skillet’s FIRST solo project and this is the group’s first Winter Jam tour. Fans are ecstatic about the group being added to the diverse lineup. LEDGER’s self-titled album is out now and even charted #1 on the rock charts. Come ready to see them rock the night with a breathtaking live performance on the new stage design!

You read that right! This year’s tour includes none other than one of the most anticipated reunions of the decade… Newsboys United.

Over the past few decades, the Newsboys have topped the Christian charts with hits like ‘Shine’, ‘Born Again’, ‘We Believe’ and so many more. The band features members from the past AND present, featuring the current frontman, Michael Tate and the past two, Peter Furler and Phil Joel. This show promises to entertain the masses and leave every fan with a smile on their face. The band will be performing hits from the past and present with the songs that fans know and love. You do not want to miss this!

Danny Gokey and Mandisa will BOTH be on the tour this year. The two have graced the attention of people all over the world with their amazing performances on American Idol back in 2007 and 2009. The two have gone on to lead amazing careers with countless hits to back them up. Check out their latest releases and get out to Winter Jam to see them LIVE.

Winter Jam has had an amazing influence on so many lives over the past few decades and will continue to impact many around the United States. If you have never attended a Winter Jam event, I highly recommend you give this year’s event a visit! With the low cost at the door and such an AMAZING lineup, you can’t go wrong!

The full lineup this year consists of NEWSBOYS UNITED, Danny Gokey, Mandisa, Rend Collective, LEDGER, Newsong, Hollyn and more! It’s only $15 at the door and no tickets are required! You can also join Jam Nation and receive incredible benefits like early admission, best seats, an exclusive Q&A with Jam Tour artists & more! 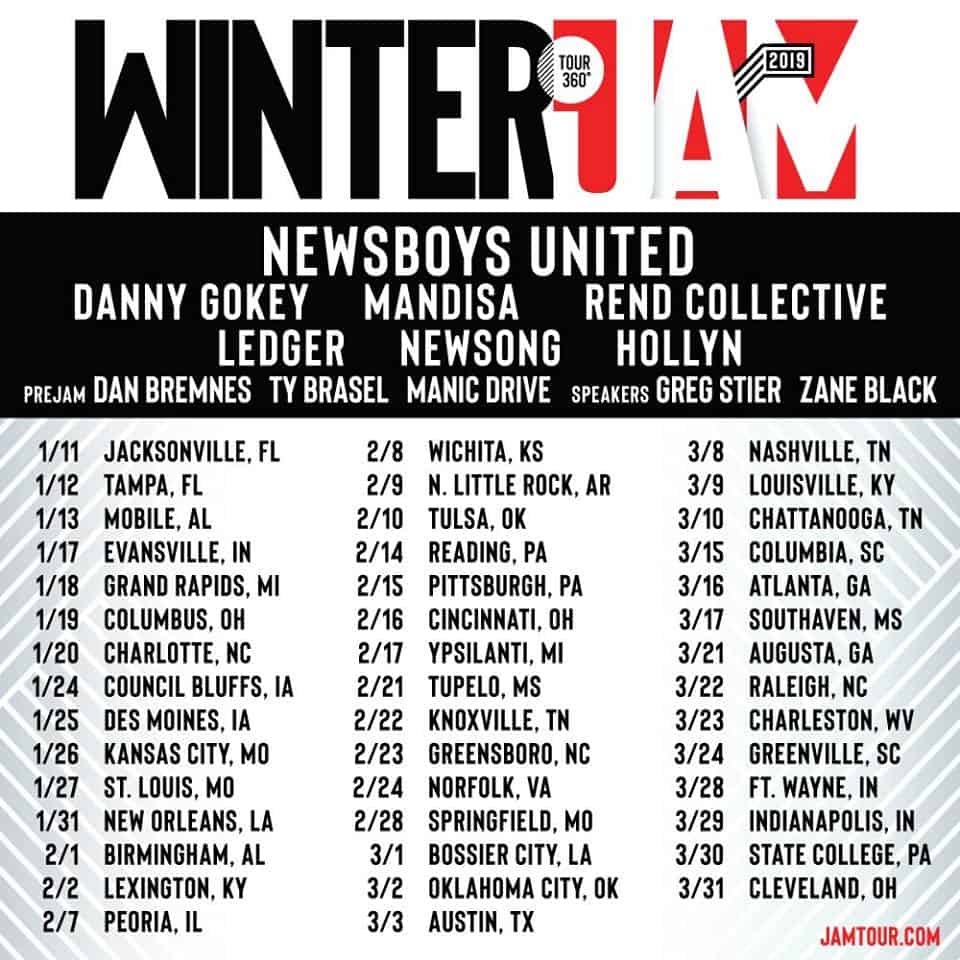 For just $100 per month you can bring the gospel to 10,000 homes. Join us as media missionaries! GIVE NOW
VIEW COMMENTS
« Are We Forgetting Heaven? Pat Boone Says Goodbye to His Sweetheart of 65 Years, Shirley – ‘Vaya Con Dios My Darling’ »