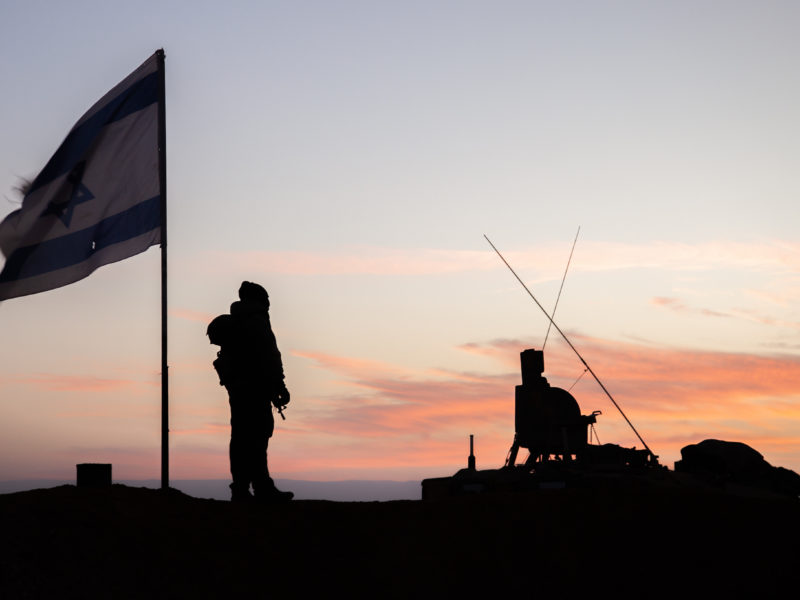 Israel “will not allow Iranian military entrenchment against us in Syria and we will not tolerate any attempt to attack us from Syrian territory,” Prime Minister Benjamin Netanyahu declared, following a series of Israeli Air Force (IAF) airstrikes against Iranian Quds Force Syrian military targets on Tuesday night.

The attacks came just hours after the IDF stated that it had exposed a number of improvised explosive devices (IEDs) near the Israeli side of the Alpha Line on the southern Golan Heights.

In its statement on the strikes in Syria, the IDF noted that the terror cell was Syrian, operating under Iranian guidance.

“Whoever tries to attack us or attacks us – will bear the consequences,” Netanyahu stated Wednesday.

Amos Yadlin, a former general in the Israeli Air Force (IAF) and former head of the IDF Military Intelligence Directorate explained that the Iranians and the Lebanon-based Hezbollah terror organization have long been trying to establish terrorist infrastructure in the Syrian Golan Heights that would enable them to establish another front against Israel.

The region in southern Syria and adjacent to Israel’s southern border has suffered from instability and shaky governance since Syrian regime forces returned to the area in 2018 after the decline of the Islamic State (ISIS). Tribes and militias supported by Iran and the Assad regime are fighting there against forces supported by Russia and the remnants of the rebels.

Israel’s activity in recent years in Syria, the battle in between the wars, led by the Air Force and the Intelligence Corps, has led to Iranian general Qasem Soleimani’s “grand plan” for deep establishment in the region not coming to fruition.

However, the Iranians are using the vacuum in the Syrian Golan, near Israel’s border, to launch a proxy war against Israel, the latest incident being the attempted bomb attack exposed by the IDF on Israel’s border.

Israel’s retaliatory attack was “relatively broad” and targeted a number of power factors. It was aimed at Iranian targets near Damascus International Airport, hit the Syrian 7th Division located in the Golan Heights, and also destroyed anti-aircraft batteries from which missiles were fired against the Israeli planes.

The Syrian Observatory for Human Rights (SOHR) reported that Israel attacked eight Iranian targets and killed 10 people, including three Syrian officers and members of air-defense forces, five Iranian Al-Quds Corps members, and two other militiamen, but it is not known yet if they were Lebanese or Iraqis.

The death toll is expected to rise further as the attack left several persons injured, some seriously, SOHR said.

“The broad action tonight, which came after a long period in which Israel refrained from attacking Syria, indicates that it was not just a response to the bombing event but a significant message to all forces in the region: Iran, Hezbollah, and Syria that Israel’s restraint in the north is over,” Yadlin wrote.

He estimates that the Syrians will not be quick to respond. Assad’s regime is in a deep economic crisis and has so far failed to end the civil war and will therefore be wary of a confrontation with a significant force such as Israel.

The Iranians have an open account with Israel but will be careful in the last two months of Donald Trump’s administration.

“At the same time, the IDF’s role is to prepare for every possibility and also for deterioration,” he noted.

To the Israeli residents of the north, he said they need to continue with their routine, as “Israel has very good intelligence,” and if it knows of a pending attack “it will most likely be thwarted.”

In any case, if there is a response it will probably be directed against Israeli military targets.

Hezbollah, which is still determined to respond to the killing of one of its operatives in Syria during an Israeli strike in August, is also looking for a military rather than a civilian target, he said.

The Israeli former general concluded by saying that the Israel strike on Tuesday night is also “a message to the powers and elements of the Shiite axis – the campaign against the Iranian establishment began before and will continue after the Trump administration.”

For just $100 per month you can bring the gospel to 10,000 homes. Join us as media missionaries! GIVE NOW
VIEW COMMENTS
« God Uses A Homeless Man To Speak To A Pastor Israeli President Meets with Heads of Christian Denominations in Israel Ahead of Christmas »