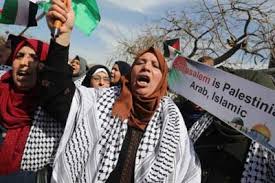 Following the announcement of the peace agreement with Bahrain, the Palestinian Authority (PA) recalled its ambassador to Manama, and protest marches have already taken place in the Gaza Strip, during which pictures of Bahrain’s rulers and flags were burned.

PA Prime Minister Mohammad Shtayyeh issued a statement condemning the breach of the Arab position and claimed that short-term considerations guided Bahrain in its relations with the US at the expense of its strategic Arab ambitions.

The Palestinian National Council in the PLO also stated that the peace agreement between Israel and Bahrain is a blatant violation of the Arab-Islamic consensus and that the agreement is legitimizing the continuation of “the occupation’s crimes” and “constitutes treason in al-Aqsa.”

Jabril Rajoub, a senior Fatah figure, said in an interview that the Palestinians must reduce the fall within the Arab League and, among other things, by popular resistance. Rajoub said that the peace agreements are a shameful move that expresses the collapse of the position of Arab regimes that prefer to fill the will of Tel Aviv and the United States at the expense of the Arab positions.

The PA is preparing for a series of days of protest following the signing of the peace agreements Tuesday between Israel and Bahrain and the United Arab Emirates in Washington on Tuesday.

In a proclamation distributed by the factions, Arabs in the PA, the Gaza Strip, Jerusalem and abroad are called to demonstrate in the streets and in front of Bahraini, US, and the United Arab Emirates embassies around the world.

In the PA, anger is growing against the Arab League, which ignored the Palestinian request for an emergency conference following the announcement of the peace agreement between Israel and the Emirates, and even more so, due to the fact that the last Arab foreign ministers’ meeting last week blatantly ignored a PA draft resolution which called for the condemnation of the normalization agreements.

The Arab media reports that Bahrain had threatened the Palestinians that if they insist on a clause condemning the normalization of relations with Israel, Bahrain would submit a counter-clause. This move exposed Bahrain’s intentions to declare another peace agreement with Israel.

The Islamic Jihad terror group and some of the Palestinian factions are now demanding that the PA and the PLO withdraw from the Arab League, and in the Palestinian arena, there is a strong condemnation of it.

Nabil Shaath, a former PA official and member of the PLO Executive Committee, said in reference to the factions’ demands that the Palestinians should not withdraw from their membership in the Arab League.

In an interview with Al-Miyadin, Shaath said: “We are preparing for a new Palestinian uprising out of an internal agreement. There is no dispute between the Palestinian Authority and the Palestinian factions, and we are all united in dealing with the conspiracy that is being hatched against us.”

Shaath added, “We hope that Saudi Arabia will not join the normalization trajectory” which he calls “betrayal and shame on the part of those who agree with the worst American president and Israeli prime minister.”

Shaath referred to the demand to withdraw from the Arab League and said, “We will continue our struggle against Israel despite normalization, but are we required to fight in Arab countries? The Arab League is a group of rulers and there is currently no figure like Gamal Abdel Nasser.”

Meanwhile, in light of the condemnation of the Arab League, a researcher at the Egyptian Institute of Strategy, Muhammad Ibrahim, recommends severing the link between the issue of normalizing relations between Israel and Arab countries and resolving the Israeli-Palestinian conflict.

Meanwhile, in the Arab world, there are threats from the extremist axis: Iran condemned the peace agreement and stated that it is a betrayal of the Muslim issue and the Palestinians.

Against this background, it should be noted that in 2011 the Shiites demonstrated in Bahrain, where they constitute a 60 percent majority, following which the royal family accused Hezbollah of aiding and abetting Iran and being behind the Shiite demonstrations in its territory. In 2016, Bahrain recognized Hezbollah as a terrorist organization.

On the other hand, the President of Egypt Abdel Fattah Al-Sisi welcomed the important step taken by Israel and Bahrain and the Sultanate of Oman welcomed the agreement and in a statement issued, it said: “We welcome the Bahrain initiative within its sovereign rights and the tripartite declaration of relations with Israel.”

The Arab media underscored that Saudi Arabia has given its blessing to Bahrain and the United Arab Emirates on their way to signing peace agreements and that the region may be up to a process that will lead to further peace agreements, including with the Saudis.

For just $100 per month you can bring the gospel to 10,000 homes. Join us as media missionaries! GIVE NOW
VIEW COMMENTS
« Nearly 1,000 Baptized On California Beach In ‘Spiritual Revival’ Pastor Chose To Stay In War-Torn Syria To Show People What Jesus’ Love »