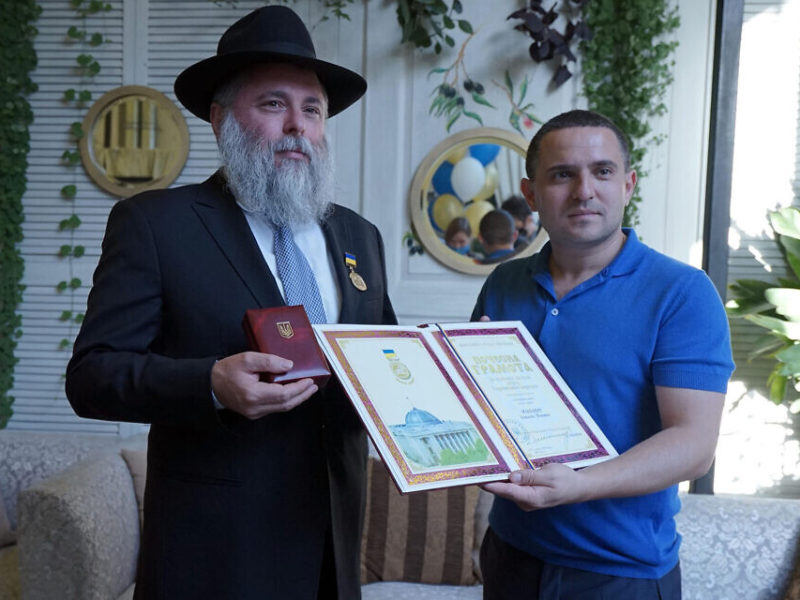 Rabbi Yonatan Markovitch, the Chief Rabbi of Kiev, on Monday was officially awarded the Medal and a Certificate of honor by Ukraine’s parliament, the Verkhovna Rada.

This is the first time in the country’s history that a Jewish religious leader has been honored with the highest award of the Ukrainian Parliament.

The award is given annually to the outstanding individuals in the world of science, culture, and art, as well as to the public leaders who made an important contribution to the Ukrainian public and the state.

Markovitch was awarded for his many years of dedicated work for the common good of all the people in the country and for the sake of the Jewish community.

The initiative to award Markovitch came from Alexander Kunitsky, chairman of the “Israel – Ukraine” parliamentary committee and People’s Deputy of Ukraine, and Dmytro Razumkov, chairman of the Verkhovna Rada.

The award ceremony, which was scaled down due to the Coronavirus pandemic, was attended by prominent leaders of the local Jewish community, as well as by members of parliament. Chief Sephardic Rabbi of Israel Itzhak Yosef, Israel’s Interior Minister Aryeh Deri, Israel’s Minister of Religious Affairs Yaakov Avitan, and Jerusalem’s Mayor Moshe Leon sent recorded video messages.

At the ceremony, the parliamentarians stressed the special contribution made by the Jewish community led by Rabbi Markovitch to the fight against the pandemic.

In recent months, members of the Kiev Jewish community have launched a major assistance campaign aimed at senior citizens. As part of this project, the seniors received thousands of food assistance packages.

Major educational work aimed at raising the public awareness of the issues and unique challenges faced by the elderly is currently underway. The campaign calls on younger family members to be in touch with their grandparents, especially now that the latter are more vulnerable than ever to loneliness.

Markovitch, chief Chabad emissary in Kiev, gained prominence also due to his service to the local community and the Jews from around the world who travel to Uman every year.

The medal of honor of the Parliament is not the only award Rabbi Markovitch has received. About two weeks ago, on Ukraine’s Independence Day, the country’s President Vladimir Zelensky signed a decree to decorate him with the nation’s highest award – Order of Merit.

For just $100 per month you can bring the gospel to 10,000 homes. Join us as media missionaries! GIVE NOW
VIEW COMMENTS
« Undercover Agent Brings To Arrest Of Dozens Of Weapons And Drug Dealers Labor Day: What Exactly Does It Mean For Moms? »