Fourth Sunday Of Advent: Let’s Not Forget The Child 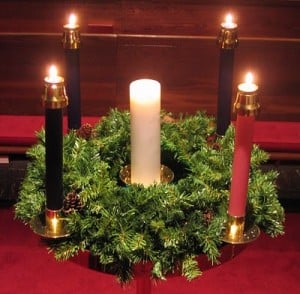 Over the past few years, there has been a blockbuster movie called, Home Alone.  If you remember this movie it is about parents who leave their 9-year-old son at home while they fly off to Paris for a vacation. I seem to recall the parents were caught up in the thrill of an international vacation they completely forgot little Kevin.

Left alone in a big house Kevin hears noises and turns out there really are burglars who attempt to gain entry and eventually do so.  Keven, left to his own devices, finds ways to make the burglars very uncomfortable. The scenes really are funny but it drives home a point that we must not forget and that is – don’t forget the child!

On this fourth Sunday of Advent, we read in the Gospel lesson a wonderful story of what happened when Mary went to see Elizabeth.  Luke 1:39-45 opens with Mary traveling to a town in the hill country of Judea. When Mary entered Zechariah’s house she saw Elizabeth and when she greeted Elizabeth her baby jumped in her womb.  Well, here’s the story from the 42nd verse of what happened:

“Then in a loud voice she said to Mary:  ‘God has blessed you more than any other woman! He has also blessed the child you will have. Why should the mother of my Lord come to me? As soon as I heard your greeting, my baby became happy and moved within me. The Lord has blessed you because you believed that He will keep His promise’.”

I would have loved to have been there just to experience this meeting.  The baby Elizabeth was carrying was John who later became known as John the Baptist.

Unlike the parents of little Kevin who was left Home Alone to fend for himself, Elizabeth and Mary would nurture their babies and not forget that God had a plan for each of them.

In today’s world, I ask that parents remember that God has a plan for every child born and as long as parents will take responsibility for rearing their child(ren) to the best of their ability God will take care of the rest.  Sometimes parents have failed in their responsibilities and the child makes it through life regardless.

I remember listening to a weekly radio show called, Unshackled that was produced in Chicago by Moody Broadcasting.  Each week they would profile a person who had a difficult start in life but somewhere along the way they discovered Christ and a new way of living.

During this Advent and, soon to be Christmas time, pray for the families who struggle with raising their children and for those children who are growing up in a society that is not paying attention to God and the Reason for the Season, Jesus Christ.