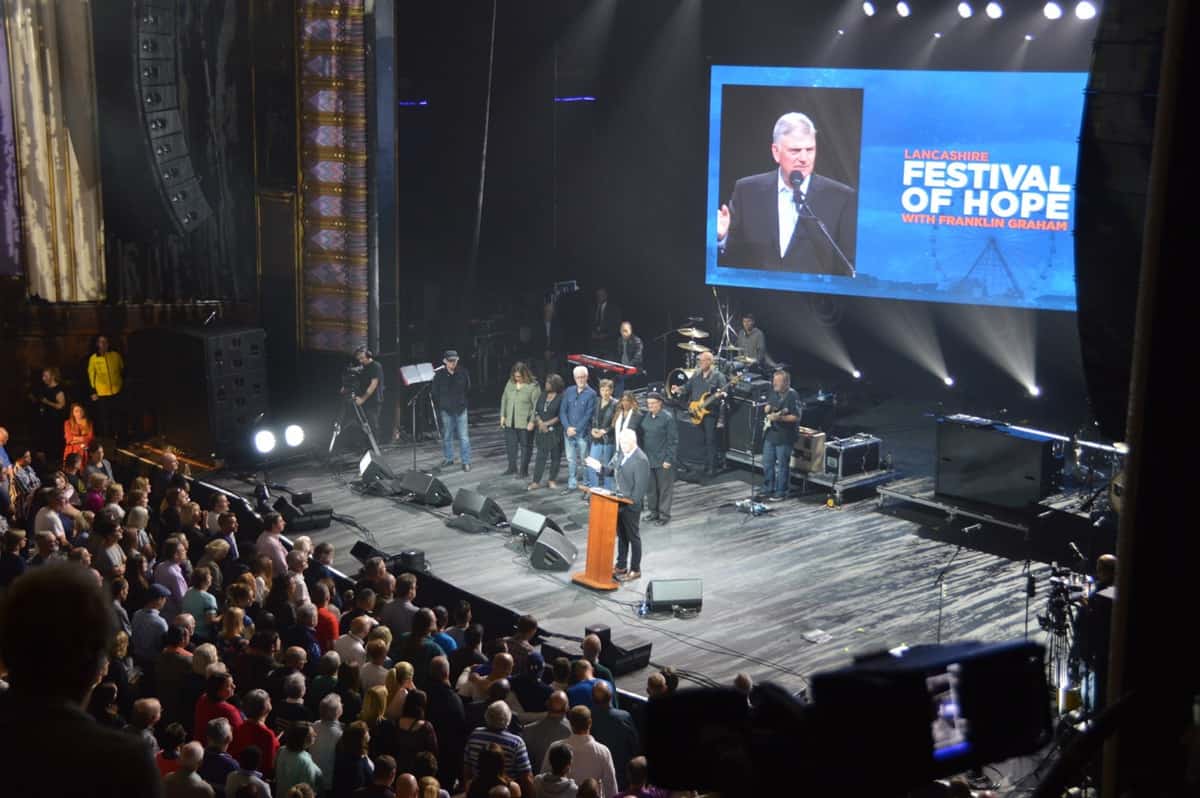 36 years after Billy Graham preached in Blackpool, England, his son Franklin, took to the same stage at the city’s opera house for the Lancashire Festival of Hope from 21-23 September. The atmosphere in the Winter Gardens auditorium was expectant with not a spare seat to be found and an equally full overflow room.

Perhaps they came out of curiosity because some groups had tried to stop the festival from going ahead; maybe they had been invited by one of the many participating churches; or just came in off the street…   It doesn’t matter how they came to be there, but how they responded.

The crowds heard some of the finest music from talented musicians and recording artists; including Rend Collective and Michael W Smith. There were testimonies of lives transformed and Franklin Graham delivered surprisingly short, but potent messages; but the key moment each night had to be when he gave the invitation for people to come forward to give their lives to God.

We’ve all seen that special moment on Billy Graham Classic Crusades, when people come from all sides of the auditorium to make a commitment to God. But, to see this happen in England in 2018 was so encouraging. Some think the Gospel has lost out to secular humanism in this country and yet hundreds came forward to pray the prayer of salvation in each service.

As the band played Billy Graham’s signature hymn ‘Just as I am’ people starting making their way out of their seats in scenes reminiscent of 36 years ago. So much has changed in the UK in the past three decades, but God’s Word has not and neither has the power of the Gospel.

Just as I am, without one plea,
But that Thy blood was shed for me,
And that Thou bid’st me come to Thee,
O Lamb of God, I come! I come!

People are still prepared to put their trust in the Lamb of God when given the opportunity. But what brought about such an extraordinary response? Franklin spoke with a sense of immediacy telling the mass crowd he would help prepare them to survive the coming storm.

He also grabbed their attention by talking about the most wicked man who ever lived; the judgement he faced; and how through God’s grace and mercy there was hope for him to be restored. Click to find out who this most wicked of all men was.

“Things have changed over the last 30 years,” Franklin said, “Things are now permitted in society that were not permissible before, but God’s laws and standards haven’t changed.”

We have all broken these laws and fallen short of these standards and the answer cannot be found in religion. “I am not here to talk about religion,” he said, “but how you can have a personal relationship with God through faith in His son.” Click to find out more about Franklin’s message on the Saturday night of the crusade.

Thank you Franklin Graham for coming to the UK, for preaching the uncompromised Word of God, in a simple but profound way. The music was amazing, the sound coming from the speakers was thumping, and the lighting spectacular. But most of all we’re thankful for the many, many people who have a new start in life, bringing a new hope to this nation.