Freed Pastor Andrew Brunson and his Wife Pray for the President 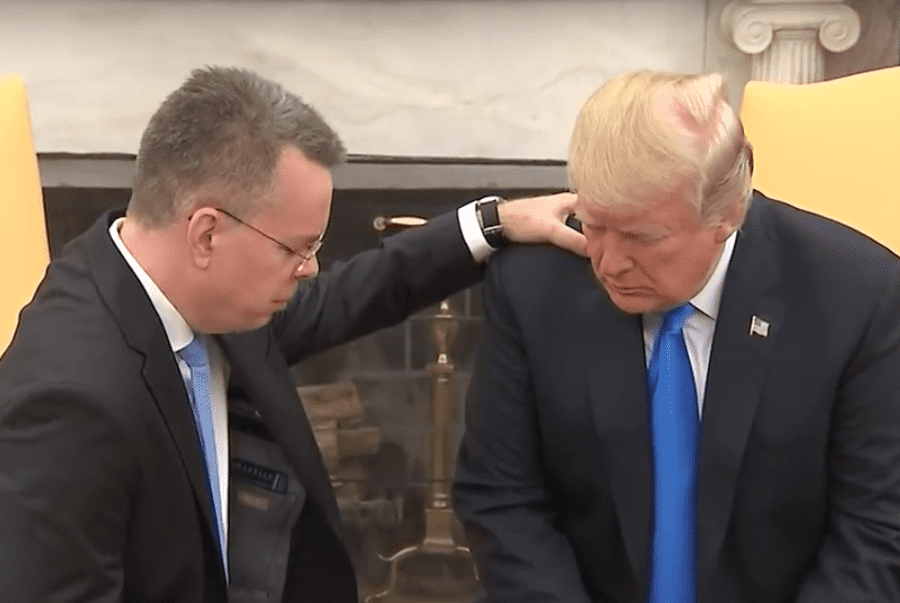 It’s not every world leader that would allow people pray for them while the world is watching but Donald Trump was happy enough to let the mass media capture these special moments as Andrew Brunson and his wife asked God to bless the President and give him wisdom.

US pastor Brunson has just been set free in Turkey after being wrongfully held for two years. Christians around the world have been praying fervently for his release and what an example that he says he has been praying for the President, despite his own difficulties. Watch this extraordinary moment which illustrates 1 Timothy 2:2 which calls us to pray for all in authority.

Pastor Brunson Prays for President Trump in the Oval Office

Andrew Brunson is a Presbyterian preacher from North Carolina who has ministered in Turkey for over 20 years. In October 2016 he was detained after a failed coup in Istanbul and Ankara on trumped up charges of espionage and terrorism. He was held in custody for close on two years although he was moved from prison to house arrest on July 25 .

The US Government has been pressuring Turkey for Brunson’s release, with Secretary of State Mike Pompeo intervening on his behalf. See: Pastor Brunson Finally Released from Turkish Prison

The immense media attention surrounding Pastor Andrew’s case has highlighted the plight of millions of other persecuted Christians around the world. Let’s keep praying for all who are persecuted for the cause of Christ, as well as all in authority.

“First of all, then, I urge that petitions, prayers, intercessions, and thanksgiving be offered on behalf of all men 2for kings and all those in authority, so that we may lead tranquil and quiet lives in all godliness and dignity.” (1 Timothy 2:1-2)