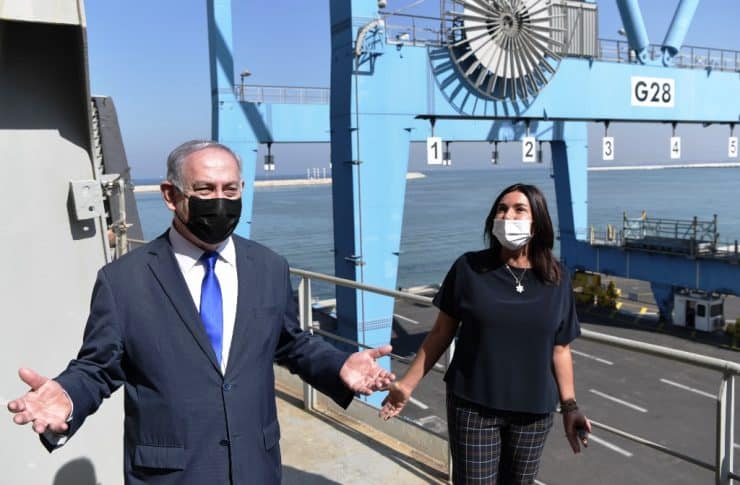 Prime Minister Benjamin Netanyahu and Transportation Minister Miri Regev on Monday toured the pier at Haifa port where a container ship from the United Arab Emirates (UAE) is anchored.

The Mediterranean Shipping Company’s (MSC) Heid was carrying a cargo of electric appliances from the UAE.

The MSC Paris made history last week when it became the first ship from the UAE to dock at Haifa’s port. Its voyage began in Abu Dhabi and called in Dubai and the ports in India and Pakistan before reaching the Mediterranean via the Suez Canal.

During the visit, Netanyahu relayed that he asked what is in the containers, “and they explained to me – washing machines. This is now lowering the price of washing machines, electric devices and food. Everything that arrives here simply lowers the cost of living and every citizen of Israel will feel the impact of it.”

“These are the fruits of peace that you, citizens of Israel, are now enjoying. Not later, not in the future – now, because this is a warm peace. This is peace for peace, economics for economics,” he said of the recently signed agreements with the UAE and Bahrain.

“We are joining the State of Israel to the maritime artery that brings to it cheaper merchandise and products at excellent quality. This is good for every citizen,” he asserted.

He again underscored that “once Israel was a cul-de-sac, meaning that you could come here from the west and leave; you could not fly or sail. In effect, you were constrained. Now, Israel is becoming a main hub, both maritime and in the air. It is possible to fly in all directions, over Saudi Arabia and Jordan. This is a land, sea, air, technological, commercial and human hub. This is a very big thing. This is a historic day, genuinely historic.”

For just $100 per month you can bring the gospel to 10,000 homes. Join us as media missionaries! GIVE NOW
VIEW COMMENTS
« Who Is The Most Important Person And Loves You The Longest? God’s Marvelous Love: May It Never Cease To Amaze Us »