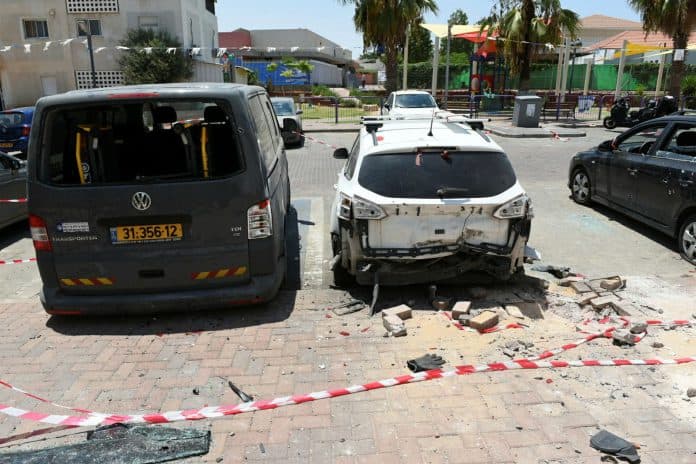 Defense Minister Avigdor Liberman met with local council heads in the Gaza Belt region Thursday and praised residents of the region for their “quiet determination and steadfastness” in the face of ongoing rocket attacks, but the council heads said that they, like other civilians, have no way of knowing whether fighting between Israel and Hamas would escalate or taper off over the coming hours.

“We’re at a fork in the road,” Alon Shuster, the head of the Sha’ar Hanegev Regional Council told TPS after speaking to Liberman and meeting with security officials. “Things could calm down, they could heat up. Like everyone, we’re waiting patiently to see what happens, to see what the defense minister decides.  “But whatever (decision Liberman makes), the goal is of course not to fight. Even if there is a war, fighting is always means to an end, that being achieving long-term quiet – not only for us, but for the Palestinians, too.”

Asked if he supports Prime Minister Binyamin Netanyahu’s long-standing position that Israeli attacks on Gaza are not aimed at toppling the Hamas leadership, but rather at “restoring quiet to the people of Israel,” Shuster said it is “always preferable” to negotiate an agreement. For that reason, he argued that the political echelon is correct to wait and see if the international community, and particularly Egyptian moderators can craft an agreement between Fatah and Hamas that would get the terror group to stop firing at Israel.

If diplomacy fails, however, he said that Israel would be forced to respond with greater force.

“If it becomes clear that this unstable, out of control regime simply cannot be dissuaded, if there is no agreement to be made and they continue to provoke escalations, then we are apparently closing in on the moment that we’ll have to put them in their place.

“But I’m not sure we’ve reached that point yet. Don’t forget, we are watching the most advanced negotiations (between Hamas and Fatah) we’ve seen for a decade or more, with international attention focused on Gaza. I think that whatever happens in the coming days, we have to go back to consider a diplomatic move.

“If it becomes clear that they are committed to breaking all the dishes, it would be a slap in the faace to the Egyptians and to the entire world. There will be repercussions on many different levels,” Shuster said.