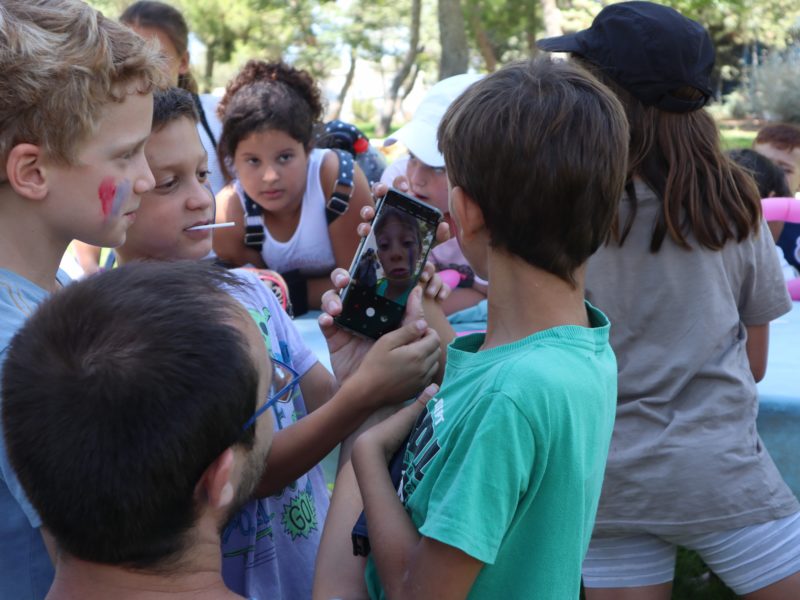 Loud singing and the happy shouts of children could be heard from outside Ammunition Hill Memorial and Museum on a mid-August afternoon.

For many, it was a reprieve following the tense situation on Israel’s Gaza border and within its communities, who have been under on-and-off rocket fire throughout the summer.

Just the sound of a balloon popping made some of the children jump in fear, showing the serious effects that being under continuous rocket fire throughout their childhood has had.

Mom, Einat Eliyashir from Moshav Yesha said that “this summer has been especially challenging.

“What people don’t realize is that the most disruption comes from the little things. Do we put on the music in the car, or will we not hear the alarm?” she explained. “The kids are at home during summer vacation, but do we stay inside, or can we go to the pool.  When we go out from the Gaza Belt, suddenly these concerns fade away. There’s no pressure here, and the kids can enjoy the peace and quiet.”
Eleven-year-old Meitar Eliyashir said that for her this summer had been a little scary.

“It’s been so long since we’ve had so many attacks, that we’re not used to it, and it can be very frightening,” the young girl said. “This is our summer vacation, and if I want to go outside to play, I always have to be close to the bomb shelters. It is so important to all of us to be able to get out and have fun during our summer break, and it is amazing that there are people who care about us to give us this opportunity, and understand our situation.

“It is so much fun to be able to come to a safe place and enjoy ourselves for a day,” she added.

Mom of three from Kibbutz Sufa Mikki Sagiv said that her children have a lot of fear but they deal with the reality to the best of their ability. “They’ve been in counseling and have had a lot of help at their school… days like this give us a lot of strength to know that we are not alone.”

The two week program, which began [mid-August], has seen hundreds of children of all ages taking part in the countless activities offered. The program was arranged within a 48-hour period, explained JNF-USA Israel Communications Officer Eric Narrow. The “real work begins,” he said, after the trauma of the rockets, in trying to get back to normality.

He added that over the entire two-week period, there would be about 1,000 children who will have taken part.

Together with the Ammunition Hill Museum – a memorial to the pivotal battle that took place there during the Six Day War – JNF-USA arranged the fun days, bringing children from across the southern communities to Ammunition Hill as well as to the Ramat Gan Safari, and on Thursday they have organized to take teenagers from the region to a concert by local pop star Eden Ben Zaken, in Beersheba.

Alon Wald, head if operations at the museum told TPS that Ammunition Hill is a place that stands for bravery and comradery, loyalty and creativity… we educate people here and once we understood that these children had lost their summer, their summer schools, it will only be natural that we would be the ones to call them and tell them we are behind you, [we are] using those same values that led the liberators of Jerusalem who came out victorious against all odds, these are the same values we are pursuing [to give these children],” he explained. “It a playful day, it’s joyful day for the kids, they are sort of forgetting where they come from, they are brave communities and brave kids and we are so proud to be able to host them.”

Volunteer medical clown Itai Nahmias, who entertained the children with laughter and balloons, said that for him it was important to “cut away the pain” these children are dealing with and play with them and work with them. “It’s a lot of fun.”

For just $100 per month you can bring the gospel to 10,000 homes. Join us as media missionaries! GIVE NOW
VIEW COMMENTS
« Trust God for Your Defining Moment Bolton: US Expects Europe To Take Stronger Steps Against Iran »